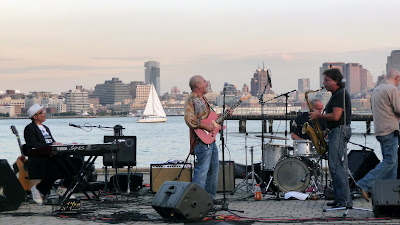 The finale to the summer music series at Sinatra Park concluded last night and if you missed it, you need to contact City Hall and demand a property tax refund. It was that good. Led by son of Hoboken, Cuban born Julio Fernandez, guitarist of Spyro Gyra fame, the assembled musicians included some masterful talent and they put it to immediate use.

Here's their Sly and the Family Stone version of "Dance to the Music" seamlessly morphed into "Wanna Take you Higher." You can't hear how dynamic it was live, (especially the thundering bass line) but the enthusiasm of both the musicians and crowd is unmistakable.

The Sly & the Family Stone youtube video link is here.
A version of The Police's "Roxanne."
Nicely done version of Steely Dan's "Home at Last."

In a crowd that grew to almost 200, Benny Harrison remarked to laughter after one scorching number, "Not bad for two Latin guys... and some white guys." On the right featured some white people dancing. I don't mean that they were white, I mean the activity: saved by one brother and a few women and children who salvaged the operation. You know the music has to be really good to get folks out there doing some of that "dancing" in public. Hey, it's all good. The weather was beautiful, the vibe was wonderful and the moments utterly sweet.

At the end of the show, someone mentioned it was Julio Fernandez's birthday. The crowd broke out into "Happy Birthday" and it was a fine ending to a great summer music series at Frank Sinatra Park.