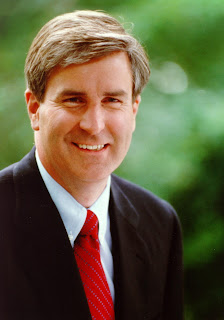 One can guess with the election season drawing to the inevitable finish, endorsement season is in fashion, front and center.  And you'd be right.  Now we're not sure about the impact of Councilwoman's Beth Mason endorsement of Governor Corzine for reelection but we have something a bit more locally flavored.


Bret Shundler, (above) the nationally famous former mayor of our neighbor Jersey City today endorsed Nathan Brinkman for mayor.  Having taken the victory for mayor in a similarly multi-candidate race back in 1992, Schundler was then reelected twice, overwhelmingly demonstrating that innovative solutions coupled with an approach of lower taxes, less regulation and reduced government can work in an urban area.


“In many ways, Nathan Brinkman reminds me of, well, me at that age — he’s not a member of anybody’s political machine, he doesn’t owe any party bosses any favors, he’s free to do what he thinks is best for the people who live in his community,” said Schundler. “He understands that the role of government is to serve its citizens, and not the other way around, and he understands that more often than not, the best answers come not from empowering government, but from empowering people.

“If I lived in Hoboken, rather than Jersey City, I’d be voting for Nathan Brinkman on Tuesday.”

“I’m honored to accept Bret Schundler’s endorsement,” said Brinkman. “The folks I’ve talked to who were living here in Hoboken when Bret was Mayor of Jersey City speak of him with fondness, and respect, and even a bit of envy that they were living in Hoboken while he was making such great strides in Jersey City.

“Bret showed during his time as Mayor of Jersey City that putting people ahead of government bureaucrats, and keeping property taxes down, create a formula for success. We need more of his kind of thinking in Hoboken City Hall, and that’s exactly what I intend to bring to the job as Hoboken’s Mayor.”

Posted by SmartyJones at Thursday, October 29, 2009