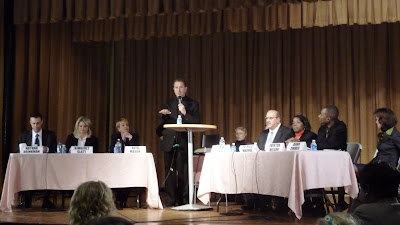 There's several ways to score a debate.  Politicians use their own calculus but we'll try to simplify it a bit.  First, debating has a traditional scoring system and you can score it purely on the points made and how opponents do similarly or fail to respond.  You can also score it on weight of argument, a less calculating method but combining the two is usually our favorite.  In the political world, there are other less mathematical values about likability, horse race impact and other ethereal areas easily spun for hours and hours on end wherever a reporter and a microphone is available.

Sometimes a one liner is the gold standard with its easy repetition garnering laughs over and over again.  Most often though, people don't do any of this type of calculus.  It's usually who they think sounded the most effective talking about their issues, or in a nutshell, who sounded more how they think or feel on the issues.  As that is often a dangerous slippery slope in the practical aspects of governing, it has the most appeal to candidates.  Political operatives will literally spend hours and hours training their candidates on how to convince the majority of the audience they in fact think and feel the same while the candidate commits to nothing and actually has said little of substance.

Now that's not a criticism of either man but more a reflection of the overall tenor on debates and campaigns here in the US.  Of course there is the simple problem of what a debate is and yesterday we did not have a debate.  What we had was a group press conference.  Be that as it may, let's try to encapsulate some of the fun and merriment (as there was little) from where we sat in the audience.  We'll score the candidates based on individual performance with a summation on the impact on the race.  That's what you really want right?


Beth Mason: running on experience or "the resume" and used it at length all night and with very solid, effective examples.  The clincher was her invitation to visit her website and read her two pages of "accomplishments" as an effective prop.  She gets an A for having a prop because none of the other candidates did.  She waved those two pages proudly over her head as Paul Swibinski clearly instructed.  But she didn't speak much to her "vision" of Hoboken until the very end and there was little new to her overall Rx for the town.  More than any other candidate, she spoke spontaneously and without using or taking notes.  For that she gets an A for confidence.  Grade: B+ 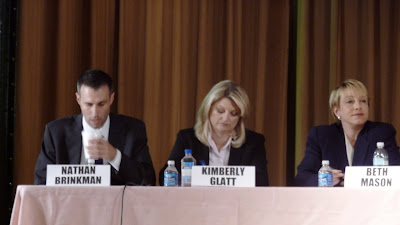 Nathan Brinkman: on pure debate points took the prize along with the courage award for candidate most willing to go out and engage the third rail: rent control.  With a one minute format, there's no way he could articulate fully why rent control actually creates scarcity of housing and artificially raises rents.  Somehow he did.  Brought more energy and ideas than the rest of the field.   At one point Kim Glatt and Beth Mason could be seen looking at him at the same time in some amazement.  They never saw him coming.  In a race, with more time and money he'd make some noise.  Overheard two guys actually listening and commenting favorably on what seemed a small idea among the many he put forward: a four point traffic stop. Grade: A-

Frank "Pupie" Raia: considered a lightweight coming in, he did better based on low expectations and rumors flying around he wouldn't attend the debate at all.  Appealed to the audience on his life experience and birther roots in a very effective, personal way. Spoke with passion on all aspects with his compelling personality and he has a good one.  Unfortunately it doesn't add up.  His business acumen emphasis has a disconnect with the out of control spending on the Board of Education where he was knocked out of office this past spring by the vastly outspent Kids First mommy brigades.  He made up for this by practically calling for a boycott of giving Hudson County its share of tax money without a better return to Hoboken.  Who would disagree?  No one did.  Grade: B+

Everton Wilson: coherent and hilarious at times, incoherent on what governing means at others.  He provided the most entertainment refusing to answer on what he'd do in Hoboken if he lost the election.  His one liner that he won't, was a crowd favorite.  He however mimicked Beth Mason's "here's my resume" answer over and over.  If you want a mayor who can hold several other jobs and be mayor too, he's your pick.  Grade: B-

Patricia Waiters: suffering from similar repetition problems as Everton, she needs a coach.  Was actually prepared to address the typical issues that came up but not effective in communicating answers.  Scored points for numerous wild accusations, as no one responded or dared to.  (In debate circles they call that a pull.)  The laugh of the night was her advice to 16 year old young women not to do what she did and get married at such a young age.  However, her mention of an ongoing fight with the Corrections Dept. over losing her job is not a selling point.  Maybe someone can clue her in. She needs to get her umbrella back from Peter Cammarano.  Grade: D 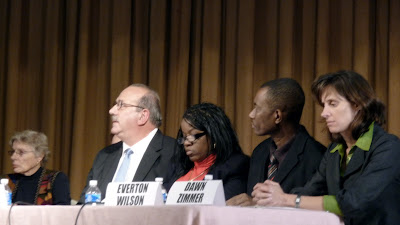 Kim Glatt: the sweetest songbird of a voice any one could hope to hear when standing before a judge.  She was providing more melody than substance and perhaps that's why you don't see more judges running for elected office.  (And yes we heard her valid point on the separation of judicial and political roles.)  Brought an unseemly army of supporters showing a completely tone deaf approach to the forum clapping out of order even though told not to do so.  The Glatt army entered with lovely campaign t-shirts and signs and marched around like a conquering army.  When the final statements were made and applause was permitted, the crowd was so put off not even polite applause came from anywhere except the far side of the room where the Glatt army assembled. (We're not blaming or scoring her on that though.)  Grade: C+

Dawn Zimmer: the biggest surprise was her absolute fluidity in answering questions from several effective angles at once throughout the course of the night.  No one challenged her positions directly on any issue and it clearly helped her comfort level.  More than once she did the most uncommon thing in a debate, discussing how she effectively worked with her colleagues on the City Council.  Sharing credit is not something candidates usually do in a debate, yet she did it several times.  It was notable in its absence from others.  Very effective in discussing the past, present and future over several answers in a succinct manner not emulated by any other candidate.  She could have offered even more detail on her recent efforts and it wouldn't have hurt.  Did not change or lighten position on the dreaded and hated reval.  Grade: A

So those are the scores for the candidate based on this seven person press conference.  Now how do you score the "debate" in the end?

Based on our horsey sense, and a bizzaro Hoboken world, this is an incumbent race: Dawn Zimmer against six challengers.  As the incumbent, she needs to define her current administration and why she deserves a vote to retain the powers as mayor.  The format was sadly perfect in allowing her to maximize these strengths and she took the reins and rode it mightily.  Her campaign people were clearly elated after the event.  There wasn't much to talk about with them afterwards so we didn't bother.  We promised to do lunch: in 2010.

In the only other notable surprise of the night, Nathan Brinkman brought a wealth of new ideas to the table and spoke the most fluently of all the candidates on how and why they should be considered.  Every race needs someone to bring fresh ideas to a campaign.  Since this is a very short one, it's typically unlikely to occur.  Tom Vincent was the most artful along these lines in the spring even with the details lacking to rebuild City Hall from the ground up with technology.  But Brinkman was far more astute about government and was the only candidate to make specific comparisons on the size and scope using a real world example.  He repeatedly circled back to New Brunswick (and its $72 million budget) as such a model.  We've never heard any candidate in this race or another in recent Hoboken elections apply a similar formulation on how to emulate a more effective, cost efficient government.

When we look into the crystal ball, and we're not afraid to step out on a limb here, this race doesn't change in practical terms based on the night's events.  It will further lock in the old birther vote between Kim Glatt and Frank Raia and give heart to the camps of Beth Mason and Dawn Zimmer.  We don't see this or the commercials currently being aired on TV of late changing the fundamentals of the race.  What would change it?  Well a candidate with some major pull dropping out would but short of that, this final sprint will follow along the lines where it's headed.  And we're not going there.

The real excitement ahead to watch for will be anywhere from seven to ten days from election day.  There may be some rumored discussion about rival camps discussing who should drop out and back the other.  This may be the only real excitement between now and election day.  Expect Beth Mason's name to figure prominently in these rumors.

Talking Ed Note: A dreaded personal question, "tell us something we don't know about you," turned out to be more interesting than the all too familiar parking discussion.  In this regard we'll toss a carrot to the readers as some people may be shocked (or disbelieving) at the acumen of a horse.  In horsey training university, Smarty was active in debate and won several awards, both regionally and nationally including Georgetown University and University of Pennsylvania.  So now you know.  And for the politicos, yes, now you have more reason to fear.   Cuz in the end, it's all Hoboken, for Hoboken for Da Horsey. 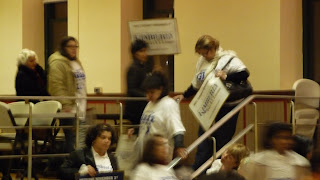 Pictured above, a small part of the Glatt army in attendance.  Our big corn stalking colleague at the Hoboken Journal is confirming a rumor the army was in fact imported from Union City.  We couldn't get sources to confirm but we trust he did.

Related: Hoboken Now also has extensive coverage of the debate, photos and discussion.

Posted by SmartyJones at Thursday, October 15, 2009