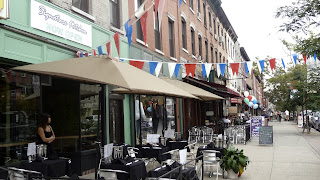 With the new Piri Piri BBQ restaurant about to make its big debut on Washington, and even as other local stores shutter their doors, the Mile Square City can now make a claim to having an official Restaurant Row on Washington between 5th and 6th. Granted they are all not the same caliber but the variety is certainly impressive if you exclude the multiple sushi options. (Signature Kitchen has a mean sushi chef but Leo at Wild Ginger still rocks too.) With the doors opening at Piri Piri, that brings an even dozen on the street. But if you want to subtract East LA, I wouldn’t complain. Does anyone from Hoboken eat there when its competitors (Baja, Charritos) trounce it into well, powder?

I’m all for Piri Piri’s success if for nothing more than the beautiful soccer Portugal (and its players) has given the world in recent years. Then there was the first generation Portuguese girl I met who I could have fallen in love with or was she Brazilian? She never forgave me for not recognizing her first. Yes that weird soul thing that women talk about like it’s always just around the corner even when they hit 80. And then mostly it doesn’t. If you are the “other” guy you land up with a woman who you catch staring off into the distance thinking about the one who got away while you are sitting across the table paying the month’s bills. I have yet to be so fortunate.