Joe Taino - "Pick Up the Pieces" 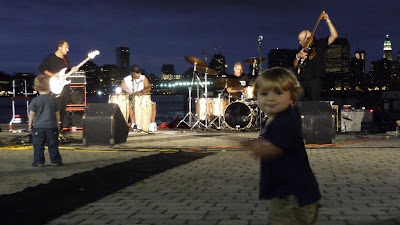 Ye gods of the blues threatened but never let go with the tears from the sky.

More on the show to come: Click on the title for Joe's rendition of Average White Band's "Pick up the Pieces."

The complete song includes some funny moments from the audience.

Smoking on the Water at Sinatra Park

Back in the day, I once met a girl who lived in Brooklyn and took her out on a date in the East Village. Oddly, she didn't know about the Village and had never been there which I found to be quite remarkable. After dinner, we were walking on Second Avenue and I remembered a blues bar off 13th street and said let's go in and so we did. That was my introduction to the Joe Taino Band and let's just say it was a rousing success and a pleasure all around.

Flash back to the present and Joe Taino is a staple in Hoboken playing late Saturday afternoons at Scotland Yard down near the PATH and often hosting scores of musicians who come from all over for jam sessions. Had the pleasure of seeing him in an abbreviated set there last year and he played a rendition of Jimmy Hendrix's "Hey Joe" that was better than any other I've heard in memory and that includes Michael Powers over at Terra Blues, another local legend. (Michael Powers has been nominated for a recent Grammy for his original album "Prodigal Son" which is also highly recommended.)
http://www.michaelpowers.com/

Catching Joe at Scotland Yard always brings back good memories when I first saw him in the East Village and tonight he plays for a solid two hours 7:00 - 9:00. If you can catch him, he's guaranteed to burn it up. From what I've seen, he's playing better than ever, and that's no hype. There's little doubt he will be shredding and offsetting his technical prowess with a real feel that only the love of blues and a life lived can bring.

Photos: Joe Taino in action (l) and a Telecaster he is rumored to have made himself (r).