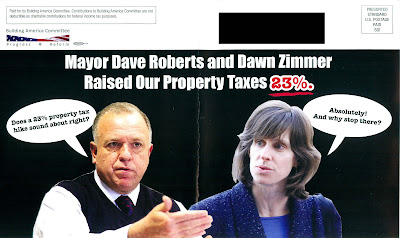 Hoboken Now via the help of an anonymous Hoboken resident has just broken the story on the smear fliers that were being mailed to every voter in Hoboken before the runoff election. Although the rat Cammarano (Camma-RAT-0) is finished here, his legacy lives on in the form of these sinister PACs that clearly violate the spirit if not the legal integrity of the pay to play laws.

We'll have more to say on this but for the moment we must bow down and thank this Hoboken resident (who wishes to remain anonymous), Hoboken Now and Carly Baldwin. Major salute to all!

Click on the title to link to the story.

Update: At tonight's community meeting on a concept plan for the northwest section of Hoboken, Councilwoman Beth Mason declined to immediately comment on the the late breaking news. She did however indicate where URSA/Tarragon holdings were situated within the area of the concept plan.

Acting Mayor Dawn Zimmer is already quoted saying Hoboken attorneys will be reviewing the matter. We expect this to be a major issue leading into the November winner take all mayoral election.
Posted by SmartyJones at Wednesday, August 19, 2009
The Rat Lives!
2009-08-19T18:10:00-04:00
SmartyJones
Carly Baldwin|Hoboken Now|that rat bastard Cammarano|
Comments 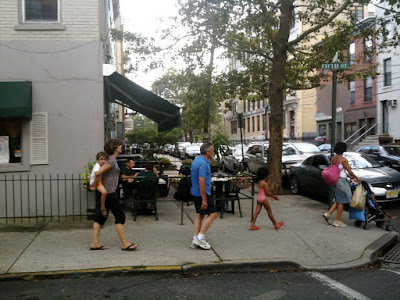 Keeping with the photo series, "Sign of the Times" (the first installment actually was the first post when this site was yet being contemplated) the latest above is less than obvious. Not having the camera in shoot mode as I turned off Washington St. today, a person crossed my path on the right and went into the street and leaned over. As I passed I looked to see what the person was in fact picking up off the ground. It was a stubby cigarette butt. Not a full one, not a half, not even a third, perhaps it was a quarter.

Now when I lived in the East Village, not a block from Tompkins Square Park this would hardly merit a second thought. As we know times are tough and look to be getting tougher. Even someone who holds an optimistic disposition sees less than ideal circumstances ahead. But in Hoboken?

Okay, perhaps it's somewhat overstated as others will point out this is hardly a big deal especially in certain corners of town. Nevertheless, it does seem symbolic of a changing tide, and not in our favor.

With the early political posturing leading into the November election, what's been on my mind of late is the sheer foolishness of most of it and the uncanny ability of some to act (or pretend) that Hoboken is an island unto itself. If reality continues to crash down on our nation, how are these people going to react? Will they see Hoboken as a community and come together or will they lash out at anyone and everyone?

Oh and the person who picked up the butt. Take a guess.
Posted by SmartyJones at Wednesday, August 19, 2009
Sign of the Times
2009-08-19T17:03:00-04:00
SmartyJones
Hoboken economic leading indicators|Sign of the Times. Another business on Washington St. in Hoboken goes under.|
Comments