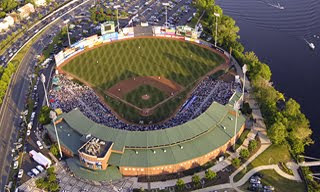 Councilwoman Beth Mason announced details of a northwest concept plan and the biggest buzz concerned the possibilities of a ballpark and which Double A team would be willing to undertake such a project and come to Hoboken. The Yankees Double A affiliate, the Trenton Thunder was mentioned several times although Councilwoman Mason stated there was interests among several Double A prospects without naming names.

The concept plan and Councilwoman Mason emphasized it was just the beginning of a conversation with the community included some in-depth detailed plans for the area that includes new space for a Hoboken museum, a boutique hotel, a light rail stop, an office and convention center, a sports complex and of course a baseball stadium that could seat in the range of 5,000 spectators.

Outside of questions from the 50 people attending on the major issues of scale, commitment and environmental concerns around flooding, traffic and parking for such a concept, there's also the looming problems of land already purchased by developers. A community activist indicated a certain parcel was resold recently for $40 million dollars within the area of the northwest concept plan.