Hand over your vote, support, or your political life 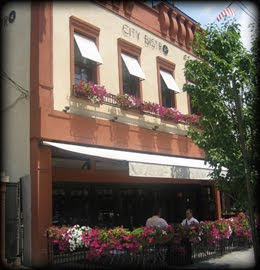 Last Wednesday night, former Cammarano Transition Team head Mike Novak inspired a gathering at City Bistro in the hopes to lift the local economy and raise some spirits and a political party broke out. While active residents pondered a summer evening with two competing town events, the real action took place later on the roof deck at City Bistro. A fly on the wall has passed along the happenings among the Hoboken political glitterati where more plotting took place than a typical work of Shakespeare.

Mike Novak looked healthier and acting as semi-official host of the little soiree, was in notably better spirits having recovered from some bad air being in the same room with a certain vile rodent who’s residence is almost visible from the City Bistro roof deck on upper Bloomfield St. Is the recovery fueling political inspiration to follow? Too soon to say, but at least he's escaped from the muck of one bad environmental situation not to mention any future contributions from south Jersey's now disbanded Burlington, NJ based New Frontier Committee. This same PAC was "sickened" by the arrest of Peter Cammarano and more so its poor investment choice.

Although the unofficial get together made no official news it took on a far larger life. A who's who of potential mayoral contenders not to mention many political operatives looking for a job were in attendance. From your favorite town developer Frank "Pupie" Raia to Councilwoman Beth Mason, to the Acting Mayor Dawn Zimmer herself, the swan song to summer was charged with the electricity of political dreams and ambition. Even the Governor was expected to make an appearance but perhaps another local ambitious lady had other plans for him (and his checkbook).

The buzz was, well actually the buzz was everywhere. The roof deck was a swimming mosh pit of potential alliances, whispered plots and horse trading on who will be getting out ahead of who for the special winner take all mayoral election come November. One section of the pit stabilized as Frank “Pupie” Raia, your friendly town ringworm took possession of a corner and declared it a developer friendly zone. Soon a number of sidemen assembled to discuss how to end the reign of the Queen or in this case the Acting Mayor.

Our formidable friend, the fly offered these parcels, none of which we'd bet the house (maybe a mid size car):

Acting Mayor Dawn Zimmer entered the fray and managed to float among the would be assassins as if ringed by angels all the while skirting Hudson County pols trying to encircle and place their stake in Hoboken.

Frank "Pupie" Raia directed everyone who speaks of him going forward to say he’s not a town developer; he's a community leader. And if you expect a job later, you best remember it. His exploratory committee operatives have completed their mission and he's looking to lay claim to the bulk of Cammarano's "locked in" votes. Your favorite ringworm is "all in" for the City Hall corner office come November and looking to soothe the losses from the school board defeat handed to him by Kids First.

Councilwoman Carol Marsh told anyone who would listen that no one should act rash and say anything about the arrested Mayor Peter Cammarano. Mayor? “Well he hasn’t been indicted. I’ve been advised to be very careful.” No update on what “they” are advising her to do now.

Another town activist had a petition requesting the City Council hold a vote for the short life of the acting mayor. No one could seem to find a pen or cared to ask why.

Councilwoman Beth Mason arrived in good spirits after her mostly large group of supporters received her concept plan in the northwest with open minds if not pockets. She may have left less so, especially after any exchange with the king of the City Bistro Court, community leader Raia. Our friend the fly says the conversation may have gone like this:

Ringworm Raia: "So Councilwoman what's the good word about the Cammarano PAC money that flooded the mayor’s race.

Beth Mason: “What do you mean?”

RR: “Well you know Cammarano’s people blamed you for those smear fliers in the election last spring, whaddaya think now?”

BM: looking for a political consultant in the room for help, “Well I don’t know what you want me to say."

RR: laughing, "Not to worry, I’m writing a check now. Just remember, you have no comment when these hit the mailboxes okay? Oh and Church Towers, that's my vote come November.”

After the event, another unconfirmed report had Dawn Zimmer crashing her bike on Washington St. and cited for DUI and endangering a carbon deleting entity. Apparently, she had crashed into a tree and scarred its trunk. Dawn told the officer in her best John Kerry impression, “Do you know who I am?” The officer indicating he did replied, “Yes, but if you had not damaged the tree I might be able to help you but this is a grievous offense.” Dawn retorted, “That’s not how we do it in New England.” No word on who will represent the Acting Mayor in the case but Chrisopher Campos has offered his pamphlet cheap, “DUI: How to almost never see your day in court.”

And where was mayor potentials Patricia Waters and Artie Lange? Apparently, no one told them about the get together.

Does this mean that the unofficial ceasefire for summer is over? Well maybe, but only until Labor Day. Enjoy the rest of the summer folks. The games begin in earnest next month.

Editors note: The fallout from the south Jersey Burlington political action committee has not. Carly Baldwin at Hoboken Now just reported on the latest casualty.