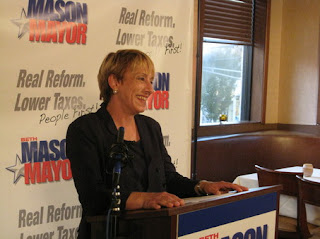 As anticipated, Councilwoman Beth Mason made it official launching her second bid for Hoboken mayor this year in the November winner take all special election. As reported in Hoboken Now, she highlighted her overall decades of experience in both the private sector and government.
Emphasizing this experience, Councilwoman Mason spoke of combining her past work in open government including the legal efforts to make public Hoboken records held out of the public eye along with her vision of the future promising to lay out a 15 year workable fiscal plan for Hoboken. Her platform includes a focus on creating additional affordable housing, environmental enhancements/infrastructure and training City employees to make a stronger impact in all areas.
Speaking before about 50 of her supporters at the Brass Rail, Beth sought to differentiate herself from her main rival, the Acting Mayor, citing her significant experience in and out of government and what she described as a moral conflict in holding the temporary roles as both Acting Mayor and City Council President.
Photo courtesy: Hoboken Now/Amy Sara Clark
Posted by SmartyJones at Tuesday, September 15, 2009
Beth Mason for Mayor ver. 2.0
2009-09-15T20:30:00-04:00
SmartyJones
Beth Mason mayoral run|
Comments

Hoboken Acting Mayor Dawn Zimmer has countered her major opponents moves for her office at City Hall with some election events of her own. Kurt at The Hoboken Journal posted the details: 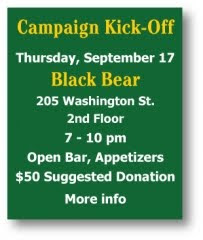 This Thursday, September 17th, we are kicking off our campaign at Black Bear Bar and Grill, and we want you to be there. Join me and supporters from across Hoboken to voice our desire to keep making the change that Hoboken needs.

In addition, we are having a fundraiser tonight, Tuesday, September 15, hosted by Helen Hirsch. We are asking for a donation of $161 dollars, to signify the 161 vote gap we need to bridge on November 3rd. Be the difference in this election! I look forward to seeing you at either, or both, these events. 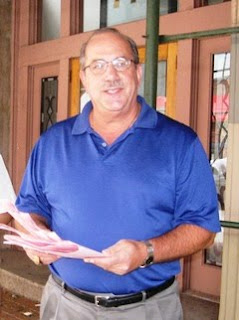 Stealing an opponent's thunder is one of the oldest tricks in the book. And today no matter what you think of the new candidate for mayor, Frank "Pupie" Raia did exactly that announcing his formal entry into the ring this afternoon just hours before Councilwoman Beth Mason's official announcement.
Seems like it was only yesterday, that as the Acting Mayor was sworn in under the cloud of Peter Cammarano's resignation, Beth Mason was announcing while on "vacation" her intention to consider running for mayor. That lad karma certainly does have a sense of humor.
Are your ready to say Mayor Pupie? Many Hoboken "birthers," - a term coined by InfotainMe, have been suffering since their support of Peter Cammarano ended in ruins. Frank Raia is looking to pacify that frustration and garner their votes. Should he do so, he could be a formidable candidate in a potential race of six or seven candidates.
Photo courtesty: Hoboken Now, Amy Sara Clark
Posted by SmartyJones at Tuesday, September 15, 2009
Your favorite ringworm
2009-09-15T16:29:00-04:00
SmartyJones
Frank Raia for Hoboken Mayor|
Comments 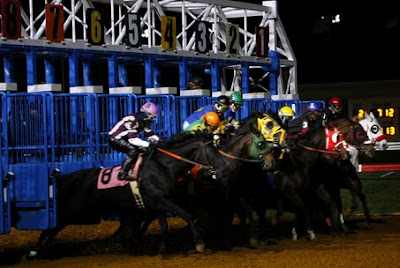 As we anticipate the official launch tonight of the Beth Mason 2.0 for mayor campaign, the Hoboken Reporter stated today a field of six: Acting Mayor Dawn Zimmer, Councilwoman Beth Mason, Frank "Pupie" Raia, Patricia Waiters, Municipal Court Judge Kimberly Glatt and Nathan Brinkman.
So that's confirmation on Nathan Brinkman who we exclusively reported as a candidate yesterday but Frank Raia's entry seems oddly stated, with him "announcing" last night. We've been expecting Raia's entry but until the papers are in, it's not official. Our prediction about Raia's entry came in a lighthearted satire before Labor Day, "Hand over your vote, support or your political life."
It appears that on the basis of this field, Judge Glatt will be the home team candidate to replace Cammerano. Expect to see a lot of the same money moving from Cammarano's contributor sheet to hers along with Frank Raia.
There's also one other local independent candidate we're awaiting word. We won't be naming him as they are finalizing ballots petitions but they have a strong connection to the business community and Stevens with a sterling professional background.
Update: It's official as reported in Hoboken Now; Frank Raia is a candidate and submitted his petitions this afternoon.
Hat tip: Amy Sara Clark.
Posted by SmartyJones at Tuesday, September 15, 2009
Mayoral field rounding out
2009-09-15T14:40:00-04:00
SmartyJones
Hoboken mayoral race November 2009|
Comments

Mile Square View is my blog. It is truly not a forum for debate, mudslinging or name calling—and of course directing such to the host is not excluded. My only goal is to give back to the town I love.  And to remain America's most beloved pony.

This site is rated R.  You may confess the worst thoughts about yourself.  You can get if off your chest about how good your boyfriend has been to you and how you still cheat on him all the time.  Or that you are not nice to your parents or siblings.  But if the language is in poor taste, it risks being edited or deleted.  It probably won't but why push it.