With zero votes cast, Glatt goes for the KO 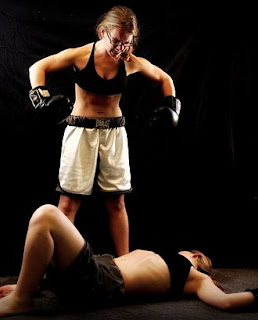 Monday afternoon with the challenge deadline looming since last week's eight mayoral petition filings, former Municipal Judge Kimberly Glatt lodged an electoral complaint to potentially KO an opponent.  As was widely reported last week, both Acting Mayor Dawn Zimmer and Councilwoman Beth Mason had potential issues on their respective petition filings.  The Acting Mayor was summoned to sign additional package pieces after being issued a receipt before the deadline which later proved to be a County clerical error and Beth Mason claimed a faulty elevator and poor building directions causing her to miss the 4:00 pm deadline.

So is the Glatt legal challenge binding to both parties?  Well no, as it turns out, Glatt's legal team has chosen to pursue the weaker case with the target being the Acting Mayor.  Last week Frank "Pupie" Raia indicated a willingness to legally challenge both ladies who lay claim to the reform movement.  In the end, it was only Glatt taking the ultra aggressive move before the deadline which New Jersey election officials have already discounted as being problematic to either candidacy.

Rumors emanating from the Pupie and Glatt camps as reported in Politicker NJ also suggest the two competing candidacies may consider unifying forces behind one candidacy not even a week after the filing deadline.  Frank "Pupie" Raia suggests it is he who is the rightful person to lead the Hoboken "birther" movement.  Both Frank "Pupie" Raia and Kimberly Glatt are natural born residents of Hoboken, a distinction that many if not most voters are indifferent to but one that "birthers" view as all important in retaining last century's local government "standards" of operating.

With a week into the campaign, the field may already be reduced to seven or less shortly, depending on the outcome of Kimberly Glatt's legal challenge.  The similarities however to the illegal resolution (deemed such by Hoboken's legal counsel) offered by the Russo clan, Councilwoman Terry Castellano and Councilman Russo indicates a concerted effort to find any way possible to strike at Acting Mayor Dawn Zimmer.  The Acting Mayor who lost in a narrow and controversial election last May to Peter Cammarano finds herself once again in the gun sites of the Russo clan.  This time via a potential stalking horse and the New Jersey courts.

Update: A hearing on the Glatt challenge yesterday in New Jersey Superior Court is rumored to state that a 30 day requirement for the City Council to vote on changing the designation of the Acting Mayor to Interim Mayor may be possible based on an earlier 2002 case.  We await confirmation as the two items are completely unrelated and it's unclear how such an issue would arise on a hearing on the merits of Glatt's initial challenge.  Stay tuned.

Talking Ed Note: The "news" story making the earlier claim has now been replaced re: whitewashed and now only suggests the 2002 case may be applicable.  If the sources are (ever) named, we'll update the story.  As for the original headline claiming the City Council could still name the Acting Mayor the Interim Mayor, consider it suspect.  It appears there's another contender to Hoboken 411 for most biased coverage not a week into the full campaign.  Is it a stretch to conclude that the source(s) were Kimberly Glatt and/or her lawyer all along?

Hoboken Now is reporting that Patricia Waiters has also filed a complaint on both Councilwoman Beth Mason's and Acting Mayor Dawn Zimmer's petitions.

Disclaimer: Photo is strictly for symbolic purposes and should not be construed in any shape or form, implied or otherwise to be representative of any current candidate in the Hoboken mayor's race.
Posted by SmartyJones at Tuesday, September 22, 2009
With zero votes cast, Glatt goes for the KO
2009-09-22T01:32:00-04:00
SmartyJones
Kimberly Glatt for the KO|
Comments