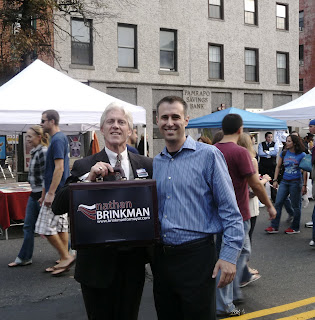 After the rains blew through Sunday, we took a trot out to catch some of the town's traditional fall festival.  We were surprised when we came across Nathan Brinkman, the new candidate in the mayor's race working the crowd for votes.  Accompanied by Sean Connelly, the former Jersey City counsel and advisor to the successful former Mayor Brett Schundler, we asked for a picture and the pair obliged.

We spoke briefly with Nathan, on behalf of Mile Square View and discovered he is a regular reader when he enthusiastically asked if he was in fact speaking to SmartyJones.  Didn't hold the gentlemen up as they seemed intent on speaking to real humans who vote in elections.  Looking forward to hearing more from Nathan and seeing what he brings to the table and the debate in this shortened election cycle.  There was also a sign at the Chris Christie stand.  As highlighted previously, Nathan's spokesman is Bill Pascoe, the campaign manager for Doug Forrester who ran for one of the two New Jersey Senate seats in Washington in 2002 against Frank Lautenberg.

Today Nathan Brinkman also received the endorsement of the New Jersey Conservative Party as reported in Hoboken Now.  Nathan lives on Grand Street in the Fifth Ward and is a co-founder of the Hoboken Republican Club.

The Nathan Brinkman campaign website lays out his platform and vision for Hoboken. 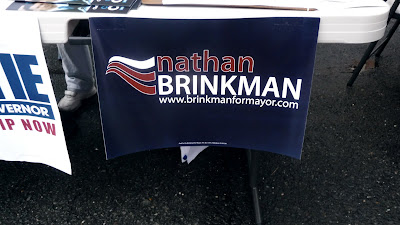