Today by the steps of City Hall, Councilwoman Beth Mason introduced her campaign team to a group of assembled media and a handful of supporters and Hoboken residents.  Acting as Co-chairs, Beth introduced David Carty, a long time resident of 21 years and formerly with IBM.  Another well known face joining him is Ines Garcia-Keim a staunch supporter of Mason's earlier campaign for the mayor's seat this past spring.  Ines has been a long time resident of Hoboken, spanning 24 years and her commitment to Hoboken is well known to all residents who have taken a part in supporting the community.

For those who wish to catch a one-on-one interview, News 12 will have coverage at some point today.  For the complete video remarks: right sidebar or HD here.  And for the full campaign press release here. 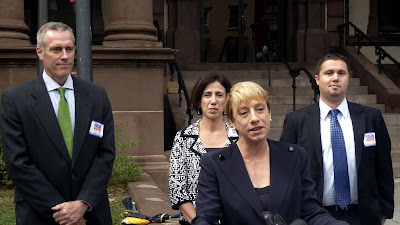 
Talking Ed Note: Although the press was invited at the conclusion of the introductions to ask questions, no one did.  Finally, we did ask Beth a two part question about her focus in this short five week campaign among the listed issues from her website.

In response, Beth spoke in great detail about the importance of Hoboken's budget and its prompt delivery being a top priority and how the process needed to be given immediate attention.

Regarding our second question: how she defines right-sizing as listed on her website platform (point no. 3) and what that means to Hoboken, she did not answer, prefacing her reply to us with, "That's two questions."

Mile Square View will attempt to get an answer to the second question.
(7:45 - An update is forthcoming from Beth Mason's campaign.)

At the conclusion in a side bar interview with News 12, Beth repeated her concerns about the temporary powers Acting Mayor Dawn Zimmer holds as executive and head legislator as City Council President until the November 3rd special election.  We will be writing a companion piece on today's event as well. 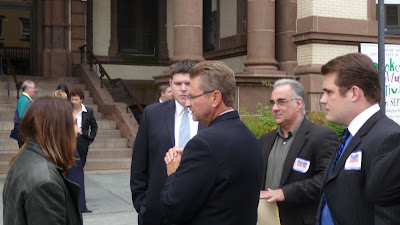 Listed as Media Consultant and Strategist, Paul was clearly running the show.