Posting a press release is usually not our bag baby, but in this case we are making an exception, because it's that big:

City of Hoboken October 1, 2009 – Hoboken Mayor Dawn Zimmer announced today that she has won an agreement to halt state legislation that would have allowed NJ Transit to go forward with their plan to build skyscrapers over the rail yards in South Hoboken over any objections raised by the City and its residents.  Senator Paul Sarlo (D-36), the sponsor of this legislation, S-2972 has agreed that the bill will not go forward unless and until Hoboken is satisfied with its content.

This agreement was reached at a recent meeting between Senator Sarlo and Mayor Zimmer. Governor Jon Corzine arranged the meeting at Mayor Zimmer's request.

NJ Transit's proposed $1 billion Hoboken and Terminal Yard Redevelopment Plan includes residential buildings as high as 45- stories and a 70-story commercial tower. It envisions 3,200 new condo units. It is a proposal that would drastically change the character of Hoboken.

"I thank Governor Corzine and Senator Sarlo for recognizing that Hoboken residents must have a say in decisions that will have a profound impact on the shape of our City's future," Mayor Zimmer said.

Zimmer went on to say, "I believe in a different approach to development-one that begins with what the community wants. Our over-emphasis on adding new condos has given us more flooding, more taxes and a costly stepped-up demand for city services. We must make sure that the NJ Transit project is at the appropriate scale for Hoboken."

“I believe it is important that the concerns of Hoboken be addressed,” Senator Sarlo said. “I pledge to consult with Mayor Zimmer and ensure that she is satisfied before proceeding with legislation in this area."

The state legislation in its current form would have given NJ Transit nearly unfettered authority to redevelop any property they own throughout New Jersey adjacent to bus stations, rail stations or rail yards in any way they see fit without regard to local zoning requirements or the wishes of host communities. 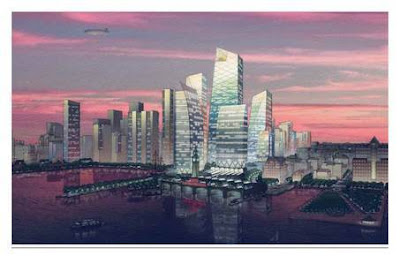 Talking Ed Note:  Although the City Council had voted in unison to voice its concern over any plans the State had to push forward NJ Transit's large development plan, there had been no commitment from the backers of the legislation in Trenton to respond in kind.


At the risk of feeling dirty, we took a look over on Hoboken 411's headlines and sure enough, the usual voice of bile and spin is attempting to turn a victory for the town into a personal attack on the Acting Mayor.  The City Council's recent vote had no binding affect on the State.  Negotiations on any development resulting in Hoboken's sentiments being a part of any decision in this development is a winning verdict.

With an election coming so soon, there's of course no way to entirely separate any good news for Hoboken and divorce it from political impact in an upcoming election.  There's no reason of course not to enjoy the victory for the town and the role of its leadership in bringing the impact of such to fruition.


We must emphasize the point of the quote from the sponsor of the legislation agreeing to satisfy the Acting Mayor before any plan is advanced.  That is leadership and that is certainly leading as a mayor, even from our Acting Mayor.

In a bombshell letter yet to be printed in the Hudson Reporter, Jake Stuvier, former campaign manager for Councilwoman Beth Mason's spring mayoral bid discusses his reasons for endorsing Dawn Zimmer in the November 3rd election. 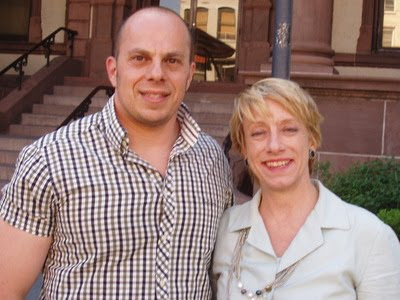 The letter is just now available in the Hudson Reporter's online edition.  In it, Jake recounts his change from being a campaign manager in a losing effort to becoming active in Dawn Zimmer's campaign.  He continues to call Beth Mason a friend who he holds in high esteem but outlines the reasons he will be voting for Dawn in the November 3rd special election.  The zoning board's nomination powers being returned to the City Council are among them, but Jake added Dawn's integrity and willingness to listen to opposing views also impressed him.
Posted by SmartyJones at Thursday, October 01, 2009
"Why I'm voting for Dawn" - Jake Stuvier
2009-10-01T17:55:00-04:00
SmartyJones
Jake Stuiver|
Comments

While awaiting a statement from the Beth Mason campaign, "What I will do as mayor" re: right-sizing, let's take a moment to highlight a new candidate's updated website.

Everton Wilson has posted additional details on his campaign for mayor of Hoboken. You can see his campaign website here.  Among his top seven listed issues: taxation, transparency, infrastructure and noise violations. In addition, Everton noted his support for the local homeless shelter and urged others to get involved.

Everton's career spans 14 years in the consulting industry, 11 in financial services combining IT and management.  Currently pursuing a PhD at Stevens here in Hoboken, Everton holds a Masters and a Bachelors degree from New York University.

Although we don't know how his uptown fund raiser went the other night, Everton's website now leaves Frank "Pupie" Raia, Kimberly Glatt, and Patricia Waiters as the only candidates without an internet platform for their respective campaigns with five weeks remaining in the winner take all mayoral election.  The election will be held November 3rd.


Everton indicated his participation in two upcoming debates October 14th and the second October 21st.  Details will be posted when available.

Update 12:05: Although we had just searched yesterday, we have found out Kimberly Glatt does have a webpage up now.  It's not a complete platform but offers a biography of her experience.

Update 4:25: According to the candidate, more than two dozen people attended the official Everton Wilson fundraiser at Lua.