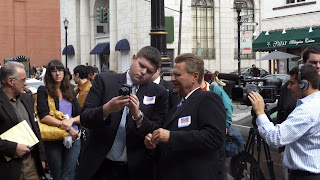 Politics makes for strange bedfellows especially in Hoboken, but even for this town with its passion for hyperbole and drama, there's always a surprise lying around the corner.

At Councilwoman Beth Mason's lunchtime presser the other day, an apparent PR event with some off message Q&A time went tilt.  Usually, an event is staged with a message for the public a candidate wishes to get out.  At the same time, the media plays a role in doing more than merely taking pictures and retelling the story if there is an opportunity for questions. (Okay, stop laughing.  Your weekend assignment: define media.)

Now when the Councilwoman asked if there were any questions, there were none.  Except from a talking horse who after an awkward silence among the muckrackingless press corp, asked the following off the cuff:

With five weeks to election day, your website (campaign platform) highlights a number of issues.  Which ones do you think are important to highlight in this short election cycle?

Then continued with: Your (website) platform also mentions right-sizing.  Can you tell us how you define right-sizing and what that would mean for Hoboken?

Now in a campaign, we always thought a seasoned candidate and one who has been in the political arena as long as Beth Mason would jump at the opportunity to hit balls off the outfield fence if not over it and out of the ballpark entirely.  Her initial comment was to indicate we had asked two questions.  (Well three actually but who's counting.)  She promptly went into a detailed explanation on the budget and the need to get that process advanced.  So far so good.  She then choose to ignore the second question although none of the other media had one.  We let it go at that although we found it quite odd.  We stayed for a few more minutes and listened in on Beth's TV interview with News 12.  She was back "on message" with the criticism of the Acting Mayor's temporary expanded roles.

How does a seasoned candidate decline comment on their own platform?  We contacted the campaign by email and was informed by the communications consultant Wednesday night an answer would be forthcoming.  And then after some polite phone calls, voicemails, and emails, we've concluded it isn't.

Perhaps it's because we went "off message."  Paul Swibinski was nice enough to provide a press release at the end of the event and we linked to it in our story.  But we also took pictures of the clear master of ceremonies and yes, it was Paul Swibinski.  As George Costanza would say on Seinfeld, "Was that wrong?"

With the army of political consultants and campaign staff assembled, you'd think those collective minds could come up with an answer or at least a non-answer answer.  But the hours ticked by, and there was no statement at all.  Da Horsey thought you should know.