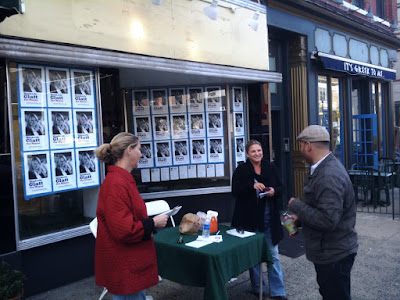 Update 10:30 - Hoboken Now released their story confirming the event with a children's program between 4:30 and 6:30, and a speech to follow from the candidate, Kim Glatt.  Hat tip: Amy Sara Clark.

Update: 8:45 - Well the party may kick off earlier but the meet and greet with the candidate actually is listed on the campaign website as 6:30.

Tomorrow, mayoral candidate Kim Glatt will launch her bid for mayor from her new headquarters at 536 Washington Street tomorrow at 4:30.  We confirmed the other location near the corner is in fact going to be just a storefront for posters.  (Previously the campaign had listed 635 Washington St.)  This photo taken earlier today shows two ladies handing out information on the candidate.  That's Kim Glatt's sister on the right.

The kickoff party to launch the former municipal judge's bid in the November 3rd winner take all special election will be located at 536 Washington St. near the corner of sixth by the restaurant "It's Greek To Me."

The kickoff party tomorrow begins at 4:30 and runs until, well they don't actually know when it ends.  The word from a source close to the candidate also indicated Kim is actually around Hoboken today filming commercials.  Since the confirmation of the advertising firm, Whitehorse Strategies (the pale horse mentioned in our grist for the mill series Sunday) it's clearly all systems go.

An unconfirmed rumor suggest that Frank "Pupie" Raia is also filming commercials in Hoboken today.  We'll get more details if available.  If there is a contact from Frank's campaign who wishes to provide any details, feel free to contact us.

There was some additional information on the KimberlyGlattforMayor.com campaign on a flyer being handed out.  Here's some of what it included:

Kimberly was appointed Hoboken's first female presiding municipal judge in 1995.  She resigned her position in September 2009 to run for Mayor because she shares our concerns about Hoboken's future.

Taxes in Hoboken have soared and our City has lost its direction because political infighting has brought our government to a standstill.

As Hoboken's Mayor, Kimberly will apply the same leadership approach as when she was Hoboken's judge: She will look at the facts and make a decision.

Kimberly will work to change the tone and manner in which government functions in City Hall.  It is her goal to work cooperatively with the City Council to put politics aside and make forward progress on Hoboken's real problems.

To help bring about this change, we need your help.   Please vote 11-1 for Kimberly Glatt for Mayor on November 3rd.

Sinatra Park City Update: "Funky, funky.. I am a junkie." 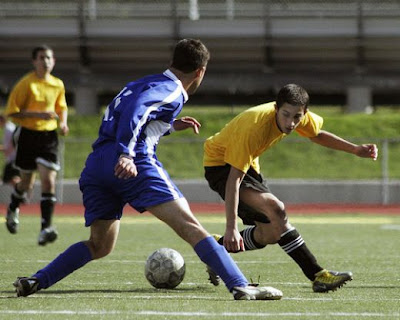 Update Monday 11:10: According to Hoboken Now, Hoboken officials will be looking to see if temporary measures will permit the use of Sinatra Park's soccer field this fall.

Back in the day long before the Kentucky run for the roses entered into the fray, futbol or soccer was our passion.  With the speed of a race horse and the ball control skills of a Brazilian, we blew through many a defender and sent many goalkeeps home crying when the ball hit the twine.

Now our beloved field at Sinatra Park is on hiatus from the locals playing the world's beautiful game and Acting Mayor Dawn Zimmer and her administration have worked with local officials to quickly scope out the problem (and it's sizable) and implement a complete backup plan for the games normally played at this location.  You heard it here first.

Complete details on the city announcement this Sunday morning after the jump.

And if anyone finds a copy of the Adidas World Cup commercial, "Funky, funky I am a junkie" we'd appreciate it.

People for Open Government along with the Hoboken Quality of Life Committee are sponsoring a debate for all the mayoral candidates October 14th at Our Lady of Grace.  Here's the complete flyer from the website linked above with complete details. 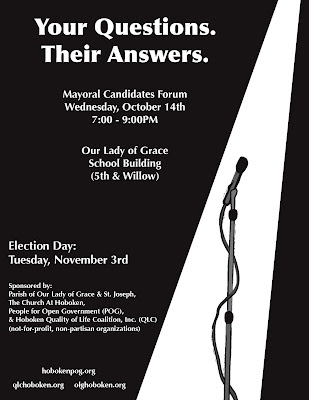