The Highlanders are coming down! 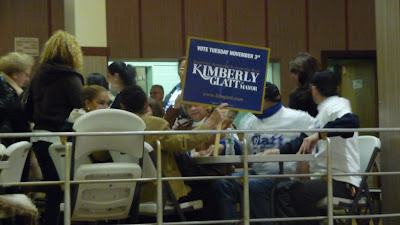 Hudson County pols and their infamous county machine as we all have come to know and love are mobilizing for election day two weeks out on November 3rd. There's been varied speculation it has lost its power to do so with its ready and able foot soldiers indicted, convicted, plea bargaining and arrested by the dozens last summer.  There's one thing we know about a crime mob though, there's always ready and willing but not always as capable foot soldiers ready to take their place.  And even with the election just weeks away, we wonder if Hudson County voters will focus on the dark underbelly revealed in the dozens arrested last summer or the erstwhile efforts of Jon Corzine's money marshaling the automatons to the polls, corruption and sky high taxes be damned.

As the US Attorneys office continues its efforts, the fallen are toppling or plea bargaining as is the case, one after the other.  Even with the protestations of innocence, the body count is piling up with no end in sight.  Jersey City apparently is currently the deepest in the federal mire and its muck can be smelled well over here even with the recent heavy rainfall.

Hoboken thought to be skating in this short election season from external election "forces" appears not to be outside the purview after all and Kim Glatt is looking more and more the lucky recipient.  Brian Stack, the king of the castle on the hill overlooking Hoboken or at least his ex-wife, are solidly behind the judge. (Katia Stack is the campaign manager.)  We witnessed the support firsthand at the debate last week and the only question now is how that stacked army on the hill will be divided come election day between the Governor and the Hoboken mayoral race.  It's taken shape, and the Glatt and Stack efforts are well in the open now, albeit from the wife's side as recounted in the Jersey Journal political insider column.  The support was foreshadowed in our "Grist for the Mill" series.

After listening again to much of the former municipal judges answers at this forum and also the Hudson Reporter, there's a familiar odor oozing out not apparent on first reading as it were.  She's parroting much of the old Peter Camma-RAT-0 lines about the budget, as most recall, the duty to rubber stamp the Roberts' budget scams year after year and also pointing fingers at the City Council, excluding the birthers of course.  If you listen closely, Kim Glatt speaks in the most vague terms about development.  She talks about what the community desires but there's nothing behind it, no process or example of how the community voice would be measured.  She also has a fundraiser tonight at $300 a head over at Dino and Harry's.  At that price, do you think she's gathering the wishes of the average resident?  More likely, she's gathering all the money of local attorneys and realtors and that's the community with the largest voice. 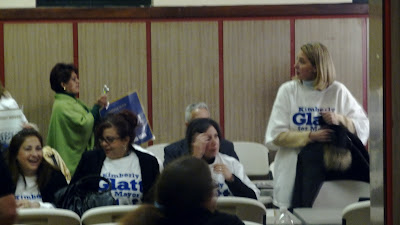 Da Machine ain't dead.  It's just winded.  And it's back off the respirator with the Glatt/Stack/Russo alliance giving it the old college try and looking to make Peter Cammarano proud.

Photos from last week's mayoral debate.  The Glatt Army consisted mainly of "the Highlanders" coming down the hill from Union City.  Second photo right is Kim Glatt's sister.  We're pretty sure there must be at least two real Hoboken voters among the dozens of highlanders.

Talking Ed Note: The moderator at last week's debate, Bob Bowdon is getting some well deserved attention for his two year in the making documentary, The Cartel.  The movie is earning accolades for its revelations about the abuse of New Jersey taxpayers and its children by the education mob squandering both money and education in every way possible.  One could call it an education mob, but really The Cartel is perfectly apt.
Posted by SmartyJones at Tuesday, October 20, 2009
The Highlanders are coming down!
2009-10-20T08:49:00-04:00
SmartyJones
Da Machine|NJ Hudson County corruption|The Cartel|
Comments