Hoboken's front and center again; this time Fred Phelps and his cult have decided Hoboken is the best place to deliver their message of hatred against our fellow Americans.   First, for those of you who have not heard of the guy, his self-proclaimed "Christian" cult has taken it upon themselves to seek out America's fallen soldiers and protest at their funerals calling the deaths the wrath of God for America's tolerance of homosexuality.  He's made many similar protests at soldier's funerals across the country with signs saying, "Thank God for dead soldiers" and "Thank God for 9-11."


The Hudson Reporter to its credit got the heart of this story correct yesterday and is now reporting on a peaceful counter protest in Jersey City.  Can Hoboken stand by with indifference now and feel ignoring this cult is the best antidote?


If you want a synopsis of the guy's history, here's a story here. The scheduled times of the Fred Phelps family, (most of the church members are apparently related to him) are: Hoboken City Hall, at 4:45 next Tuesday, October 27th, ostensibly to "raise awareness" about the NJ corruption arrests earlier this year.  This is to be followed by a protest outside of the United Synagogue of Hoboken at 7:00 pm.  They call this the "Just Say No to Goyum/Hebrew Criminal Enterprises Tour."  What a witty guy this Fred Phelps. 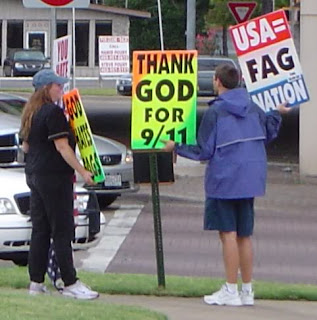 Jersey City already is forming their own peaceful counter protests with the idea of dwarfing and drowning out Fred Phelps' message of hate.  We think Hoboken residents who are available should consider the same and make signs of tolerance and carry American flags to counter Phelp's hatred and stand up and be heard.  It should be peaceful but it should be numerous.  Well, what do you think?  smartyjones@me.com

Hoboken Now is reporting a Jersey City group has decided to ignore Fred Phelps and family altogether and cancelled their counter protest.  In addition a late afternoon story has the Acting Mayor Dawn Zimmer also advising same, saying the group is "beneath contempt."

While we note the readers comments and email from folks all appear to agree with this approach, we have to wonder if the media will do the same and we doubt it.  What's the difference between "Pastor" Fred Phelps and say "Rev." Al Sharpton, other than the latter was able to achieve "rehabilitation" without ever apologizing for his earlier behavior.