Reader Lincolnlogger raised a question on who had the idea first on a cost per vote breakdown regarding our reference to Hoboken Now's story.  We doubted there was any theft of an idea  that was often discussed in this election with the Mason Campaign spending in the ballpark of a half a million, but just in case, Amy Sara Clark called it standard post election fare and offered this Jersey City story from earlier this year as an example.


Now here's a related joke from this election.  Two political operatives from opposing camps run into each other on the street.  The first representing Mayor Zimmer asked the other in the Beth Mason campaign if he knew what the record was in NJ for cost per vote in a losing campaign.  The Mason operative replied in the negative, "I'm not sure what it is but I'm pretty sure we're going to break it."


True story.  We sat on this one since last week just to make sure we didn't leave any tracks where this guy could get fired.  Yes, even when a good joke is at stake.


In another story of interest, the White House actually did polling to see about replacing Jon Corzine in the statewide Governor's race.  After the polling came back poorly and that included Newark mayor Corey Booker, they landed up making a number of trips on behalf of Jon Corzine but it still failed.  At least this doesn't reflect on the White House though. 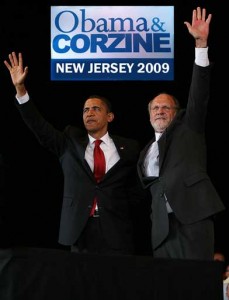 Related: Bill Pascoe who supported Nathan Brinkman also did a piece on the earlier rumor.  This one had reached our ears in the summer as well.

Talking Ed election notes:  Mayor Zimmer contrary to some of her opponent's predictions, not only won the 4th Ward election night but every ward in the city.  In Councilwoman Beth Mason's 2nd Ward, the tally was 905 - 594 in favor of the Mayor.  In the 4th, Mayor Zimmer took 883 votes with Frank "Pupie Raia and Beth Mason pulling 474 and 425 respectively.


Considering the fact that Mayor Zimmer was outspent 6 or 7-1 when all expenditures are totaled from her two main challengers, that's beyond impressive. Girlfriend had some pull.


The problems the City is facing especially the looming financial problems at the hospital are ominous.  Mayor Zimmer in an interview after the Stevens debate mentioned efforts to find funding grants of up to $40 million.  That's a formidable task and one that must be very high on the agenda.


Amy Sara Clark has posted the "preliminary" cost per vote analysis at Hoboken Now.  We should note that those figures will change.  The Kim Glatt campaign will have a larger backend of figures to add into their tally not appearing to this point.  With the Beth Mason campaign GOTV effort, her final figures will only grow further as the largest campaign expenditure.


Hoboken Now also has posted a story on Everton Wilson, the mayoral candidate leaving the country due to medical reasons.  Wilson said via email doctors have told him he has a stomach condition causing him to lose weight and it's life threatening.  He hopes a return to his native Jamaica will lead to him proving this wrong.


We wish Everton all the best and a speedy recovery.

Update: 2:45
We've just discovered from the Hoboken Journal, Mayor Zimmer may not have actually won if you count all of her six competitors combined.  The jolly green vegetable has all the details on a marvelous analogy for the sour grapes crowd led by the inept Perry Klaussen at Hoboken411 who is now catching on his email bomb, well bombed.
Posted by SmartyJones at Thursday, November 05, 2009
Election Sidebar
2009-11-05T11:44:00-05:00
SmartyJones
2009 Hoboken mayoral election notes|
Comments