Say hello to the bad guy 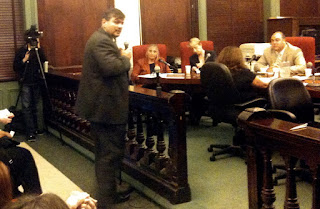 Last Monday, CEO Spiros Hatiras (pictured left) of HUH, the Hoboken University Hospital* appeared to make a presentation to the City Council.  The bomb he dropped was an announcement the ticking time bomb was not set for next year but December was more like it with less than 100K on hand.  This crushing blow followed with his urging the City Council to join in going hat in hand to the State for additional hospital grants.  Either that or be prepared to absorb the mess of the hospital's closing, loss of jobs and oh this little problem of Hoboken being on the hook with a $52 million bond.

At the meeting Council President Peter Cunningham asked why the audit results were not presented sooner?  No answer to that question was provided.  This whole thing gets worse and worse and smells of a set up.

The answers we'd like to see are when these people (among others) are put under oath and when the new Attorney General can get in there and find out how much similar UMDNJ activity has taken place.  Short of that, we're not buying anything being sold here.

The Hudson Reporter interviewed Spiros Hatiras Thursday. From their story:

Assets like the buildings cannot be sold off, Hatiras said, because they have been used as collateral on the $52 million in bonds that the city staked. So if those bonds came due, which Hatiras believes they would if the hospital were to apply for closure, the city would have to pay the bondholders roughly $65 million, which includes the bonds and interest.


They have not yet determined whether the city is liable for labor contracts, but Hatiras said the potential process of severing those agreements would “at the very least be ugly.” The roughly 800 employees represented by the two unions would obviously be opposed to the closure.

Yes, those lovely building that were part of the win win to offset any possible closure.  And we're not even sure about the underlying property rights.  One local legal bond beagle offered us this nugget suggesting one possible option, if only a hopeful one. "A HUD 242 Financing might be in order to clean up this Bond mess.  HUD 242 financings are a special low cost bond financing specifically for distressed hospitals."

The HMHA board will hold its next meeting Tuesday - 7:00 pm at Assumption Hall, 308 Willow Avenue.

Related:  The Hudson Reporter on the original "celebration" what former Mayor Dave Roberts called a "glorious night for Hoboken" when the $52 million hook was attached.

* The official name of the hospital is Hoboken University Medical Center (HUMC).  We'll use that name when they allow the new AG to go in there and see what's really been going on.