This is audio of a clip where NJ State Senator Sarlo, the big proponent of NJ Transit's huge monolith overshadowing Hoboken is heard making his famous comments on mike when a nomination he's pushing goes down in flames.


Senator Sarlo votes yes but the vote for a fourth job, or is it the fifth (along with two pensions for one of his cronies) goes down in flames.  Listen to the eruption yourself.  He clearly doesn't care about the culture of corruption in New Jersey.  He's a proponent.


While the NJ Transit battle looms ahead, we're eager to take this right to the door of a proud card carrying member of this State's culture of corruption.  Bring it!  Wally Edge at PolitickerNJ is stating Sen. Sarlo is not giving up.  He's going to bring his boy back for another vote to try to get him job number five on Monday.

Hoboken411 - the first retraction - Ever!

It came to our attention yesterday that a huge historical event occurred in Hoboken.  We could scarcely believe it ourselves when the buzz got out that Hoboken411 made a retraction.  That's certainly big news in these parts.  So what's the retraction about?  Is it the numerous lies and half-truths he spilled over this past election cycle, his support for our last arrested mayor or his continued lying butchery of the truth on the newly elected one?  Well none of those actually.  See our neighbor the jolly green vegetable for all the details.  He's written a companion piece to go along with some unearthed youtube videos of the man behind Hoboken411.  In all our travels around town covering meetings and events, we only saw him once.  He clearly knew who Da Horsey was because our camera was set up dead center.  He was nervously looking out from the corners of his eyes.  If we didn't have some interviewing to do, we would have had a few words for him on the incident below.  Maybe next time.


Full disclosure, Da Horsey knows more about Hoboken411 than the average reader.  We've had exclusive photos of a police arrest taken off our site and posted on Hoboken411 without permission.  When we demanded they be taken down we discovered firsthand what others said about Hoboken411's arrogance.  Via email he proclaimed his victimhood, said the photos were "given" to him and eventually said he would take them down when he got around to it.


The Hoboken Journal ties the megalomania together rather nicely.  The videos must be old though. He's much fatter now. 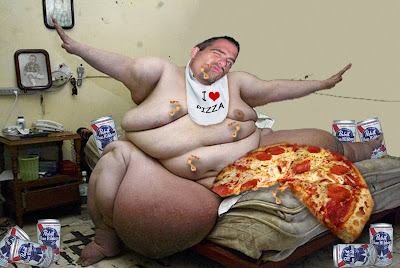