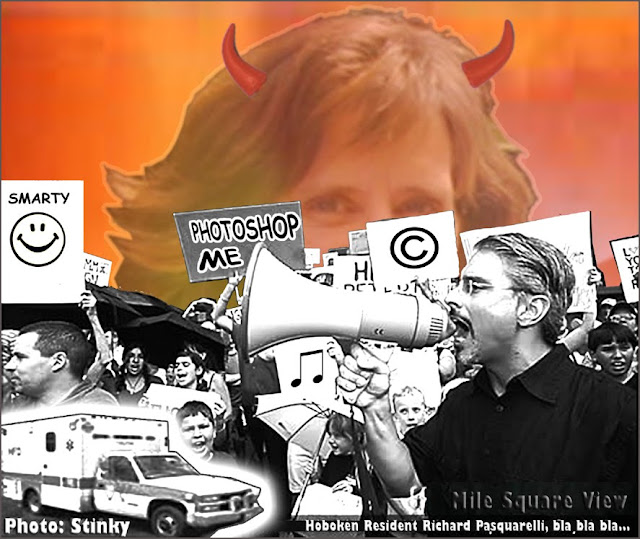 When we reported on Hoboken411's threat to City Hall and city workers, we noted it may not be long before we would see personal attacks on Hoboken citizens.  Little did we know it would occur so soon, let alone mere minutes after MSV posted its piece.


Richard Pasquarelli, the master of ceremonies at the the protest against Peter Cammarano at City Hall last summer turned out to be the latest target of a Hoboken411 hatchet job.  This one as so many others did not go well when Richard was able to get his reply in, thus silencing the thread there which was quite happily applauding the muddy work of its host.  Perry charged Richard with hypocrisy stating "Pasquarelli has curiously changed his mission statement" from tax cuts and a property reval to a mere complaint about a traffic light.  It's absurdly delusional and in regards to taxes this is in fact a miraculous improvement from the denial of reality right into election day with the mere acknowledgement taxes are going down, although now he colors it by saying it isn't "substantial."  Richard's rebuttal ended any possible continuance of the inane and inept attacks on him with the thread going dead silent since.  Hypocrisy thy name is Hoboken411!


Full disclosure, we met Richard the day of the City Hall protest and consider him one of our favorite Hoboken neighbors now whenever we pass ways as we did most recently at the City Council meeting.  His inspirational efforts in the City Hall protest last summer led to our becoming active at Hoboken Revolt.   Consider this story our Christmas gift to Hoboken411.  Merry Christmas Perry!


Here's Richard in his own words utterly destroying Hoboken411's lame attack:
I wasn’t even really talking about 11th St at the City Council meeting for more than a second, I just mentioned that the light there takes forever to change and when it does, it only lasts long enough to let three or four cars through. What I said was “Maybe somebody could look at the timing of that light”.
BUT, what I WAS talking about at the meeting, if you watch the tape on channel 78, was about putting traffic cameras at the STOP signs that nobody stops at, thus bringing in revenue to help LOWER OUR TAXES, back to the ISSUES. Watch the video, you’ll see what I said.
As far as Zimmer, I’ve been going to meetings and watching the votes by the city council, and as far as I can see, they seem to have OUR interests at heart, not those of the developers or the unethical people in this town who think they DESERVE deals because of who they know. I’m also waiting for the budget hearing to make myself heard about that. For example, as far as the discretionary spending that Trisanti presented, we need to look at that! I don’t know a single person who has had a raise in the last to years and to give our city employees a retroactive raise right now is a disgusting move on the part of the fiscal monitor. I have no qualms about speaking out about that before it happens. There’s just the right time to do it.

And it’s the same for the rest of our Revolt steering committee, who meet every month, ON OUR OWN TIME, and we all have jobs and families too, yet, we have been working feverishly on the hospital issues, pilot payment issues and ESPECIALLY the Union Contracts to make sure that the TAX payers are aware of the kind of deals that are being made. And trust me, if the rest of the people in this town knew what we have heard through the grape vine about the union contracts, there would be another rally tomorrow. And by the way, the contracts are being negotiated by the state monitor, not Zimmer! And THAT is the only place where we are going to make a dramatic change in our tax situation. A reval should be done too, but it should happen AFTER we lower our taxes. If the taxes don’t go down, we still need to do a Reval, we are legally supposed to do one every fifteen years.

So don’t tell me that I’m not involved.

Talking Ed Note: We've been working on our creative photography and photoshop skills.  Although the skies are not filled with evil horned Zimmers, we know this is the unfortunate tortured world Hoboken411 lives and breathes.  Enjoy!

With the snowstorm now underway, we couldn't help but notice the sentimental reflections already started for the year over at our colleague's site, the jolly green giant.  It brought a tear to our eye as we thought about all the noble work halted when Peter Camma-Rat-0 was taken down and all the potential for looting the taxpayers with him.


There's a photo up capturing the spirit of those happier days in Hoboken.  In line with this sentiment, we're passing on the extended mourning of the legendary City Council advertisement (in its entirety) now buried as a relic in Beth Mason's fall mayoral campaign.


As a sentimental fond remembrance, we are bringing it back in all its original edited glory for your viewing pleasure.  We're giving this the silver medal for Greatest Fails of the Year.  When Judy Tripodi announced the tax decrease along with the budget's arrival, the contrived lies fell upon themselves, except at Hoboken411 who bravely stood in the face of the truth and kept pushing the Big Lie as long as possible, right into election day.  That massive fail gets the gold medal, beating out even Peter Cammarano's Malibu moment caught on tape by the FBI.  We're giving that historical moment at the Malibu the bronze in a tie with the massive fail of Perry Klaussen's email bomb the day before the election.  The lies piled upon lies did nothing in stopping the blowout 20 point victory by Mayor Zimmer on November 3rd.  Okay, maybe he cost her a 20.5% victory margin.  Wot a loser!