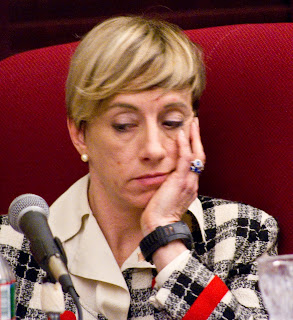 With the Condon report not even reviewed and digested by the public (made available on MSV earlier today) Councilwoman Beth Mason has decided it's time to go all out and demand the resignation of Councilman Ravi Bhalla.

Hey, you know the saying, if you fail then try, try again.  Clearly, there's something that gets Councilwoman Mason wee weed up about Councilman Bhalla.  Some speculate Mr. Bhalla would run for the 2nd ward Council seat next year with Councilwoman Mason's popularity in a free fall.

The Jersey Journal is running the latest antics of Councilwoman Mason no doubt urged on by her consultants outside of Hoboken who also got paid a tidy sum when she ran a second failing effort for mayor in November last year.  The story raises questions about filing reports for officials and Mr. Bhalla is interviewed and explains his rationale for a filing's lateness.  ELEC may review it and decide if a fine is warranted but it's not clear such would be pursued in this case.

Update:  An invitation only press conference Tuesday morning will be held by Councilman Ravi Bhalla this morning addressing this issue and Councilwoman Beth Mason.

MSV had posted just earlier Monday, the consulting firms in the employ of Councilwoman Beth Mason would choose attack but even Da Horsey is shocked how prescient the prediction.  As it happens, the attack comes not even two hours after that story was posted containing the complete Corporation Counsel report on the Condon contract. While the Jersey Journal is a respectable publication, the timing of additional questions on proper paperwork filing coupled with quotes from Councilwoman Beth Mason shows all the earmarks of a planted story.  To the consulting firm responsible for this effort (and there's at least two to choose among) MSV wishes to say, "Well done!"

In her continued over the top embrace of her political consultants' pay to play strategy - she pays and they get to run amok in the Hoboken playground, Councilwoman Mason demands Councilman Ravi Bhalla resign.  And the legal charges - there are no legal charges!  The demand for resignation is entirely based on ethical concerns with Councilwoman Mason acting as judge, jury and executioner.

It's notable there are no other City Council members interviewed for this story.  It's a glaring omission and the question is why?  What was the rush to get this story out with only Councilwoman Beth Mason quoted?  Is that any semblance of balance?