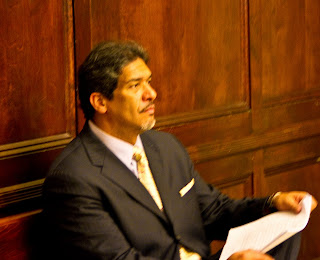 Director Angel Alicia is the subject of a complaint filed with the New Jersey Attorney General's office for overlapping pension and pay - allegations made by an officer in the Hoboken Police Department.  The complaint stemming from a review earlier this year of the Hoboken Police Department audit, stated the role Mr. Alicia currently holds acting as Public Safety Director should be discontinued.

The complaint filed by Lt. Detective Mark Competello claims Director Alicia improperly assumed the position of Public Safety Director in Hoboken while still officially part of the Union City Police Department overlapping on both pay and pension while failing to meet a time requirement in between the two positions.  Lt. Detective Mark Competello insists the time requirement of six months being out of the Union City Police Department was not satisfied.  Director Alicia states in an interview with Hoboken.Patch.com he in fact met that requirement while taking terminal leave from Union City.

City Business Administrator Arch Liston states the matter is under review with the state.


The motivation for the complaint is not altogether clear but the complete report is below.