Guest of the Stable: Grafix Avenger 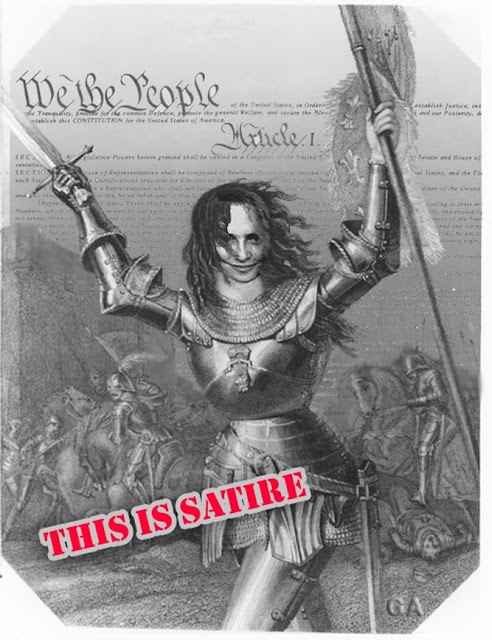 Thank you, Horsey-- it is a great honor to be invited as today's  "Guest of the Stable"... well, I guess I kind of invited myself.  So thank you for not saying "No!"

You see, I made this graphic (above) and since MSV gets a lot of traffic,  I thought I'd hang it up in your stable. Because if a graphic falls in a forest, and no one's there to see it, did it make a sound?

I've had a blog, Grafix Avenger (http://grafixavenger.blogspot.com/), since the end of March.  Do you know what a blog is?  I can tell you what it's not.  It's not The New York Times, or even MSV.   No, a blog is a rubber room in cyberspace where the proprietor gets to jump up and down and shout.  Or whisper.  Or sing.  Or flip a disingenuous politician the bird.  In my case, it's all of the above.

Nothing wrong with that, right?  This is America, after all. And, our great country has a fantastic, crumbly old piece of  paper called 'The Constitution', chock-full of scrawly-things called  'Amendments'  which endow our citizens with liberties.   Like this:
Congress shall make no law respecting an establishment of religion, or prohibiting the free exercise thereof; or abridging the freedom of speech, or of the press; or the right of the people peaceably to assemble, and to petition the Government for a redress of grievances.

The First Amendment. My personal fave.

Because  it allows you and I, like all other Americans,  to express our opinions, popular or unpopular, withour fear of reprisal...  uh, oh.   Without fear of reprisal.  Somebody tell this to the dumber-than-a-box-of-rocks crowd.  They misunderstand the document that is the foundation of American democracy, that so many  Americans have sacrificed themselves to preserve.   We are talking about an essential American right.  Freedom of speech.

But no, these big, dumb rocks have decided the Constitution can be cherry-picked...  for example, a person who peforms an unpaid, volunteer service for their city ( Hoboken, for example)  is not entitled to free speech even though her speech bears no relation to her public service.  Somebody tell that to Liz Markevitch.  Oh yeah, I already did:  http://grafixavenger.blogspot.com/2010/06/back-at-ya-liz.html

Coincidently, ALL of the big, dumb rocks are former or current political adversaries.  Many have been lampooned by yours truly.  So they're mad.  Well, let 'em complain,   I understand that.  But that is not what they do.  No.  They impugn The Critic's public service to our city,  snootily intoning that The Critic can't have free speech AND a role in making a better Hoboken.  I am guessing they want to shut the speech down.  And punish The Critic.  Someone send  Liz Markevitch an American civics book.

Now, every box of big, dumb rocks has a leader.  In this instance, the Head Rock is loaded with dough.  Which she gets from her husband, Rock-a-fella.  So she doesn't need to attack her critics with conventional methods.  There are more insidious ways, the best money can buy.  Well, they aren't really that good.  But the hapless rocks think they are, and their rocky hubris will be their downfall.  Read about it here: http://grafixavenger.blogspot.com/2010/06/mason-sympathy-tour.html

I have to wrap this up- Da Horsey is charging me per word.   As long as  you understand WHY I had to put the ugly warning label on my  graphic.  Otherwise the buttery-voiced  dumber-than-rocks spokesman would download it and distribute copies to the City Council and the BoE...  crying "But she's FRENCH!".  It's been done before.

In conclusion, I'm thankful everyone knows the difference between a journalist and a blogger, between representational art and  satire, between a photograph and a Photoshop.  Everyone... except for the dumber-than-a-box-of-rocks crowd.
http://grafixavenger.blogspot.com/

If you'd like to participate in the "Guest of the Stable Series" please indicate your topic and keep the length to less than 1,000 words.  We welcome readers submissions on local meetings, issues and civic events.  Submissions will be published as is and are not protected by copyright other than rights inclusive to Mile Square View.