Here's the Office of the Mayor's response to the year end request from Hoboken Revolt and our story "The Revolt will not be Televised" re: audits.

I write in response to your letter requesting information regarding the status of making the Public Safety Audit and operational audits available to the public.

I agree with you and the many Hoboken residents that believe an open and accountable City government is in the best interest of all parties.

As you noted in your letter, I called for the release of the public safety audits early in 2009, and I am pleased to inform you that just this afternoon, State DLG (Division of Local Government Services) Director Jacobbuci told me that the Police audit is in the final editing stage.  She committed to provide the Police Audit to the City by January 18th.    Once the City receives the document I will provide Police Chief Falco and Public Safety Director Alicea with one week to review the audit before it is released publicly.

Unfortunately the State did not complete departmental audits or an audit of the Fire Dept.  Therefore my Administration is currently working to further evaluate all city operations.

In addition, we are diligently working to make City Hall and all of the Hoboken government open and available to all residents.  We have and will continue to implement processes and procedures to make applicable records and information readily available.  Next month, thanks to a grant from the County, experts will be on-site assisting with reviewing all documents on the 3rd floor of City Hall.  Plans are underway to enhance the City Hall website to improve access to records electronically.


I appreciate the opportunity to provide you with the information I have available on this matter and the steps I have and will continue to take to obtain the requested information. 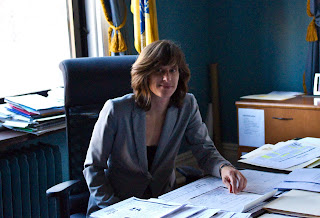 The Comedic Stylings of Dave Roberts

If the brochure in the earlier posted piece didn't give you a laugh, then surely this exceptional greatest hits compilation by the Wile E. Coyote, Eric Kurta will give you a few Friday chuckles.  We hope no one got hurt in that car crash.  Oops, looks like we all just did.  Again.

The Ghosts of Christmas Mayor's Past


It sadly almost merits now a whole series itself, what might be called "Ghosts of Christmas Mayor's Past" but to be fair you have to be around long enough to do the type of damage particular to Hoboken's governance or more appropriately poor governance in past years.  Take a look at page seven, it's a real hoot.  Da Horsey laughed so hard until the bill arrived.  Apparently, the bill is now due and Hoboken will have to figure out how best to account for it.


A reader submitted this gem yesterday, a lovely piece of work which we present to you in its entirety. The punchline is on page seven, but don't let that stop you from enjoying the whole brochure.


MSV would like to take this opportunity to thank former Mayor Dave Roberts.  If it would not be too much trouble, we'd ask if he would submit a final bill so we can finally tabulate all the damage to our town.  And we're not just talking about the cost of this brochure either.


Talking Ed Note: Yesterday, after our interview with the fiscal state monitor, we almost added a comment on how this would be twisted by Hoboken411 and put the timer up with a 3, 2, 1 countdown.  We decided not to as it's unseemly and frankly unfair to even link a few words of that cesspool to others who are in the middle of handling serious matters, even problems in how to account for this $4.2MM error inherited from the Dave Roberts administration.  In fact if you read the Hoboken411 rant, (advisory, please don't do so on an empty stomach as it will induce dry heaves) the accountability of this error's creation is mentioned nowhere.


Well clearly Hoboken411 and its minions are back to doubling down on the bad medication before proceeding with more conspiracy theories, ranting and the ugliness that is accountable to no one. (Do you notice how there is never a quote from the people being charged in all of Hoboken411's and his minions' tirades?)  MSV notes it was Hoboken411 that refused even reporting a tax decrease was scheduled and then only recently admitted its existence and only then to deem it insubstantial.  But that's mere child's play.  The feast of assaults on everyone is there for all to see.  The Hoboken411 minions anonymously labelled "critics," well who might that be?


The truth is there is a responsible tenor and approach by people in City Hall now.  The time for questioning how this will be handled remains in the present and we're seeking real answers to real questions on the matter.  Before MSV weighs in, it seems prudent to actually get the facts instead of trying to lie about the past to pat yourself on the back today.  Did Mayor Zimmer, the fiscal monitor or anyone in the government today play a significant role in creating this one time charge?  No.  Does that stop Hoboken411 from wildly making up conspiracy charges every which way?  No again.


The garbage out of Hoboken411 is frankly ridiculous.  Da Horsey is not sure what Rx is required but urgently asks the pharmaceutical industry to offer its help on a compassionate basis.  If you are gong to concoct a new conspiracy with different pieces and parts daily, at least stick to one routine.  Otherwise the men with the white wagon will be coming sooner than later.  And btw, you forgot to put a picture of Councilman Mike Lenz into your latest hatchet job.  You declared him the mastermind of all conspiracies City Hall previous.  How'd you mess that one up?  Surely, your Adobe Photoshop is in working order.
++++++++++++++++


We note there's an open policy disagreement in government and it's time to allow everyone including the public a chance to weigh in before a final decision on accounting for the 4.2MM pension charge.


It's time to get down to work even in the shortened time left in this budet's fiscal year, not throw in the towel.