Stevens: the world turned upside down 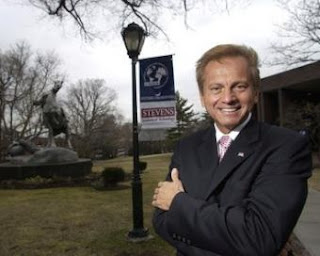 In a blockbuster story, Melissa Hayes of the Jersey Journal is reporting that the President of the Stevens Institute will resign.  President Harold Raveche's effective resignation date is July 1, but that's only the beginning of the major overhaul clearly a result of State Attorney General Anne Milgram's 16 count complaint.

There's a lot of details to the story and we strongly suggest reading the whole piece.
Our major concern now is if this will impact Councilman Nino Giachhi's free parking at Stevens.  (That's the rumor mill going here in town.)  We hope not.  Because we wouldn't want those St. Patrick's Day kids messing up his car parked on the public streets March 6th.

Talking Ed Note: AG Anne Milgram doesn't have a big resume for her time spent as AG but she's going out with a bang.  Thank you Attorney General Milgram!

Update: Stevens posted a joint letter from Board Chairman Lawrence Babbio, Jr. and President Harold Raveche.   The only thing missing are smiley faces.  Whoever does public relations for Stevens deserves a medal and a pink slip.  This is utterly disgraceful to pretend this is some sort of normal transition.  That's the moral climate coming out higher education these days.  Makes Wall St. look like pikers.  If you want to have a successful career in white collar crime, education is the place to be.  On Wall St. you can land up in jail. 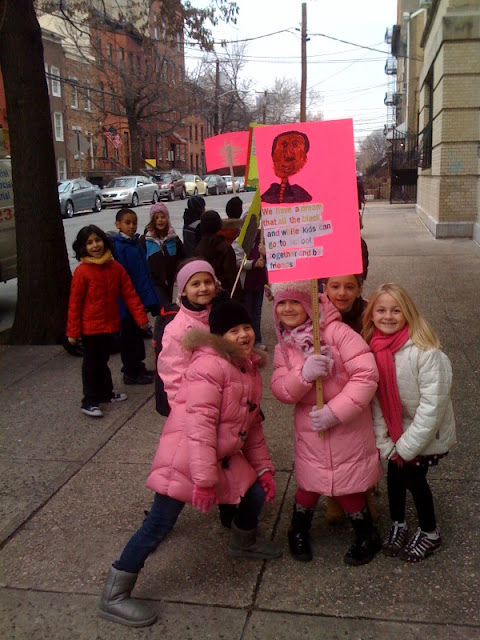 Hoboken's kids went out and did their part to honor the memory of Martin Luther King today.  The BankRobber sent us a nice picture to mark the event.  Claire Moses of Hoboken.path.com is all over it with complete coverage capturing the spirit.

She's one fast pony out of the gate.  Keep an eye on her; she's the horse to watch.

A tale of two cities

Last night a lottery was held for the new HoLa charter school program kicking off in September.  Claire Moses is out of the gate in a full out sprint and covered the story for the newest full time website in Hoboken: - Hoboken.patch.com.

The new story, "Some disappointed, Some Happy As New Hoboken Charter School Fill Its Spots," details the reaction of parents who participated in the lottery.  MSV can't help but wonder how far off the trail bilingual education concept has come.  Back in our NYC days, high schools applied the idea extensively.  It failed to integrate Spanish speaking only immigrants into society, instead isolating them further: not only from the rest of the school population but American life as well.

We'd note from this limited vantage point of parents in the photo, that's not going to be the case.  A tale of two cities is however clearly the visible trend in Hoboken education. 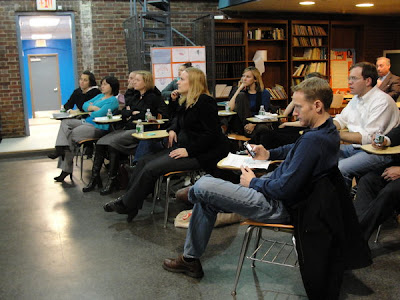 In this audio segment Judy Tripodi addresses if there are reserves in the 2010 budget related to the public safety negotiations.  As part of this, arbitration is raised.

Judy also refers to the last City Council meeting and the reasons why a suggestion of 0% increases for public safety is not realistic and why arbitration would not lead to that outcome.

In this audio segment, a continuation from part 1, Judy Tripodi discusses the build up of Hoboken's problems over decades and the rich benefits for public safety which also grew under that time period. Tax appeals are raised and Judy mentions new tax revenues coming online totaling $3 million.

The fiscal state monitor also addresses the $4.2 million in retirement pension costs incurred under the Mayor Roberts administration and gives the options on spreading this out over several years and the various approaches and costs associated. Specifically, Judy explains why this is not an operating cost and how she is working with the elected officials to come up with an agreed solution.

For the record, the public should know that a meeting was held back when Dave Roberts was still mayor with NJ State officials charged with pension administration. Along with the mayor and numerous state and local officials, the state presented the options on how the pension cost could be packaged over several years. (Let the uptown conspiracy loon and its minions chew on that fact for a while. Like the old Soviet Pravda newspaper, you can be sure they'll come up with a new conspiracy.)