This is part 4 of the audio interview with Judy Tripodi, the state fiscal monitor. Initial questions here are twofold: one on the practical impact of the standards adopted and implemented in the 2010 budget and in the secondary area of updated financial software.  Public Information Officer Paul Drexell jumps in at one point to identify a detail.

First question here starts asking what are the advantages with the revamping of the budget process and the specific benefits to Hoboken.  Then the issue of budget transparency is discussed with the public's desire to get more details on the existing information and drilling into how  more details can be made available.  Parks become an interesting example as part of this discussion.

MSV plans on completing the series by the end of the week.

This rendition of the "A Change Gonna Come" really did capture the spirit of today's event. The audience response gives you a true first hand view.  Can I get a witness?

For this video we experimented with a used 30 year old manual Pentax M-lens.  It lent some atmosphere, perhaps a little too much and it did double duty with the earlier photos.  This is Pentax's new K-x and we highly recommend it.  The Pentax 55-300 lens packaged is an absolute must.  Amazon has a great deal on the package. 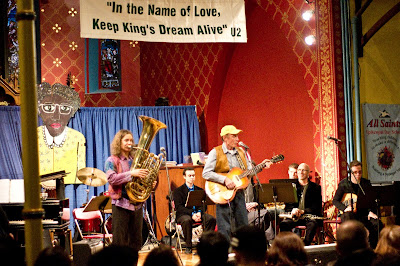 Here's just a taste of today MLK Celebration at All Saints.  Musicians, speakers and a packed house absolutely filled to the gills.  There was not one spot anywhere available.  We ran into the jolly green giant and also the new full time reporter for Hoboken.patch.com Claire Moses working the event too.  So check them out for more coverage on the spirited event. 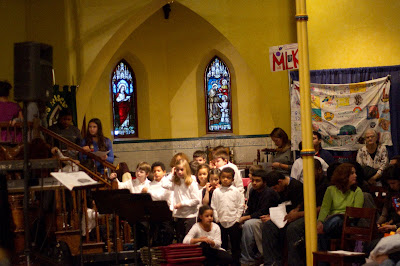 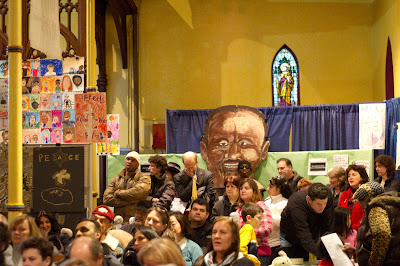 All in for All Saints

Mark Mauer at Hoboken Now posted a story on the events honoring MLK today and it's important to mention the program scheduled this afternoon at 4:00 - 6:30. 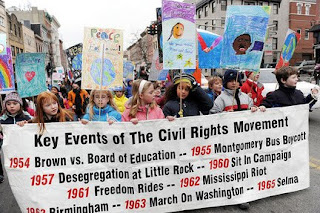 Claire Moses at Hoboken.patch.com summarizes the activities with a forum allowing readers to post their comments, photos and videos.

Horse Sense: Looking ahead in 2010

There's not many years in Da Horsey's life that's begun with so many challenges to start the New Year.  Hoboken sits staring at a brutal tough economy with double digit unemployment, its home state facing billions in deficit (with perhaps 25% funding cuts right behind Gov. Corzine's $400 million slash) and a nation that is in deeper red ink.  The answers from the federal level?  Well there is no answer offered unless you call adding an entitlement to others already trillions in the red that alone chew up 92% of the US budget by the end of this decade.  How do you add another unfunded, underestimated "healthcare" entitlement to the mix?  Sigh, let's avoid that reality for now, everyone else is.  The real bill for that will come in November...

MSV is reluctant to say much more on the broader level about the year ahead. As Da Horsey forayed deeper into the local political culture, overlapping to the state side has been almost a natural byproduct.  For years we wondered how New Jersey could be such a mess and why do people continue to vote for the same machine politics to keep sticking shivs in our back?  It just didn't make sense.  But ironically, a close examination of what ails Hoboken is a mere microcosm of what ails the State of New Jersey.  MSV is not abashed in its optimism of the newly elected Mayor Zimmer last November or the working coalition in our City Council led by the fine stewardship in short order by the new Council President Peter Cunningham.  There's a certain beauty in the ugly irony of where we find ourselves.  It's easier to get more done and repair the damage to our institutions whether it be process or rooting out corruption in hard times.

On the City Council side, there's a lot to be optimistic about.  Councilman Ravi Bhalla has impressed us immensely with his evolving presence on any matter he lends voice to and Councilwoman Carol Marsh has been extremely measured with noteworthy contributions almost every time she has entered into the fray.  Councilman Dave Mello has shown an even steady keel when he's lent his voice to the proceedings. The biggest shock though has been the emergence of Councilman Mike Lenz.  We of course expected some positives on the areas of the budget but he's been doing good work on the smaller, less visible subcommittee level (as other members are too.)  This speaks well of the serious intent and professionalism that now exists with the reform coalition.  For the first time, there's a real chance to do meaningful work at all levels here.

On this, there's more than meets the eye though.  Every single councilperson can have a bigger impact should they be willing to actually make an effort on the grass roots and subcommittee level.  Instead of tossing every idea into a resolution for public consumption, generate the support by, okay I know this will be a shocker, speaking to your constituents, you know the voter.  Yes, even when it's not election time.  (And no we're not talking the pr dog and pony show stuff.)  In addition, don't come to the City Council with prepared questions to interrogate a Director.  We're not impressed by that and no one else is either.  Spend some time reaching out to these people and working on your questions/issues one on one.  They are on the job every single day after all.  We've met and chatted with most of them.  This is a fine, professional group and they will respond, that's absolutely clear.  That they have set this uncanny standard of showing up to all the City Council meetings even if they are not anticipated to be part of the agenda doesn't mean it's time to do ALL the communication with them in the City Council Chambers.

Unfortunately every day that ticks by now means we are also chipping away at a "spending diary" and not managing our budget to steal a phrase from one of our insightful readers.  There's not much time to strike out and save significant monies and both the public and City Council recognize the opportunity is slipping away to do so even with seven figure goals expected.  This raises a lot of issues and some we don't have answers for and no one in the government does either.  The working budget group is yet underway with unknown ability to execute beyond the employee costs and union negotiations still undergoing.  We'll more to say about the former, but as to the latter - there's no value in MSV putting two cents there.

Being an optimistic pony, it's hard to explain the trepidation we feel for our friends and neighbors, city, state and country.  The pain we see out there now is nothing like anything  in adulthood when we couldn't take in the full impact of the misery index: inflation, unemployment and interest rates.  For those who believe in a higher power, we'll just say please remember to pray for our town, state and nation.  Those who don't well we'll leave you with the Chinese perspective: the year of the tiger.  Sounds like a cool year but it's actually significant in upheaval.

Talking Ed Note: This was originally written on New Year's Day before a wave of other labors forced Da Horsey to move on to more timely events.  It was intended to be posted  before the first City Council meeting this year as a reflection on what has transpired and lies ahead.  We'll just have to cross hoofs that larger issues don't overtake us on the local level.
.
Posted by SmartyJones at Monday, January 18, 2010
Horse Sense: Looking ahead in 2010
2010-01-18T10:01:00-05:00
SmartyJones
New Year's Horse Sense|
Comments

In honor of the dream...

Few men in American history are known by or for just a few words.  Martin Luther King is one of those few Americans who hold that honor for speaking about American truths, American principles and American dreams.  Many video clips are available but this one is selected specifically for capturing the essence of the words in the "I have a dream" speech delivered in Washington DC.  The speech has become a universal symbol of American principles, American aspirations and American freedom.

MLK called out to a future where his four children would "..one day live in a nation where they will not be judged by the color of their skin, but by the content of their character."


These words ring true now more than ever in all aspects of American life.