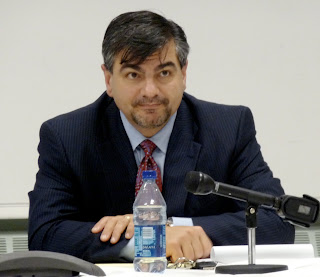 Mark Maurer at the Jersey Journal is updating the HUMC story with more comments from the hospital CEO, Spiros Hatiras stating "Frankly, we're baffled."  The hospital administration then spent time today speaking to employees to respond directly to the suggestion in the report the hospital was closing.

The biggest news in the story is almost buried by the response to the State transition report.  Although it won't be official until Wednesday, the hospital's budget is stated to forecast a $3 million surplus!

Of course year end forecasts can't be readily believed when the red ink has piled up so high in recent years.  Let's hope the corner is turning in the hospital's favor.

Related: More background and quotes from Claire Moses at Hoboken Patch.com.
And more quotes and questions about the transition report by Timothy J. Carroll at the Hudson Reporter.

Office of the Mayor announced:

“I am in the process of reaching out to Governor Christie to personally express my Administration’s commitment to working with them to develop a Hudson County regional hospital plan,” Mayor Zimmer commented in response to news of the transition memo on health.

“The hospital provides an essential service to our community, and my administration is fully committed to giving the austerity measures recently implemented, such as a 10% wage cut, an opportunity to succeed," Mayor Zimmer stated. “I am committed to working with the HUMC Administration, and the board of the hospital, including newly appointed commissioners, to improve financial oversight, implement an austerity budget, and coordinate with the State to work towards a regional county hospital plan.”

Soon after getting into office, Mayor Zimmer learned the hospital’s financial situation was considerably more challenging than previously disclosed.  “The $7 million award from the Health Care Stabilization Fund provides the City with time to evaluate all options and develop a long term plan,” Zimmer noted.  “The operation of the Hospital and the potential liability of the City remains a primary focus of my Administration while we evaluate the financial and operational issues inherited from prior years,” she added.

Update: Mayor Zimmer spoke with the new Gov's Administration today:
Mayor Zimmer was very pleased with her conversation with new Governor Chris Christie’s Administration late this afternoon regarding Hoboken University Medical Center and other matters.  “I look forward to working with the Christie Administration on the challenges facing our City,” she said.
.

The Jersey Journal gave Hoboken a heart attack or maybe the semblance of one with heart palpitations in a shocking report from Gov. Christie's transition subcommittee report on health.  The punch line that bowled this horse over, not a month after $7 million came in a grant from the state for the Hoboken University Medical Center is on page 5:


On December 22, 2009, the Corzine Administration announced $40 million in Health Care Stabilization awards to 9 hospitals. While many of the hospitals receiving aid met the above criteria, at least one hospital, Hoboken University Medical Center, will close in the next few months even given this grant funding. We view this as a misuse of limited state resources for health care stabilization. Additionally, NJDHSS allocated the entire stabilization pool instead of prudently holding back some funds to address additional fiscal crises that will arise.

Joan Quigly who is both a state Assemblywoman and a head of external communications at the hospital has denied it this morning, telling the Jersey Journal,

""It is certainly not going to close," HUMC spokeswoman Joan Quigley said this morning. "They're wrong. They were undoubtedly unaware that we had our employees take 10 percent pay cuts."