Public Safety Audit from the State

Mile Square Exclusive
On Saturday at the City Hall Budget Workshop a discussion among City Council members on the public safety division led to questions on the Public Safety Audit for the Hoboken Police Department.

Director Susan Jacobucci of the NJ Division of Local Government Services responded to MSV's questions last week and today on the police audit's availability and its delay.  In an email reply early this afternoon, the Director replied:

"At the present time, I am completing the final edit of the document.
Please understand that the Division has had one resignation and one
maternity leave of people dealing directly with the report.  This is one
of six reports I am currently finalizing."

A statement by City Hall from both Mayor Zimmer and the fiscal state monitor, Judy Tripodi calling for the immediate release of this report and also for a fire audit is anticipated later today based on a City Hall official.

Related: The Jersey Journal reported late this morning that the Lt. Angelo Andriani's status is now suspended without pay. He has been on paid suspension for the last two years.  No further details are available for the moment but a news conference is planned for tomorrow at 3:00.

Correction/Update: A formal statement is expected to follow the Tuesday news conference with the Mayor on these issues and the Budget Workshop held at City Hall Saturday.

Get a professional and here we have some professional aid from Ethan Chazin in his February newsletter. He's both solidly grounded and creative in approaching career and life challenges. Feel free to share and distribute with your friends and neighbors.

Sign of the Times: US flag over Stevens MIA

A few days back MSV took note the US flag over Stevens by their athletic field was missing in action.  Previous to that the US flag appeared damaged and shortly thereafter disappeared entirely from atop the flag pole.  Knowing there's readers from there, maybe someone will drop an email and let us know if a replacement is on its way.  That flag display is undoubtedly the highest point in the whole town.  We're looking forward to seeing Old Glory fly again. 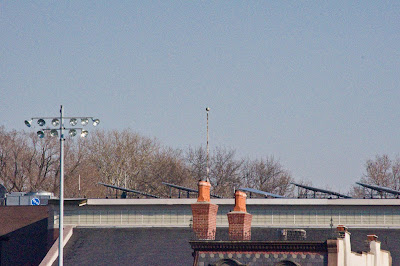 Posted by SmartyJones at Monday, February 01, 2010