NorthJersey.com reports today the new Hoboken School Superintendent will be Frank Romano.  Mr. Romano was one of two finalists recently appearing at the last Board of Education meeting in Hoboken answering the public's questions.  The official word comes down Monday night in Fort Lee with an official resignation.
The Hudson Reporter posted on this story earlier Saturday.

Ode to the Wile E. Coyote 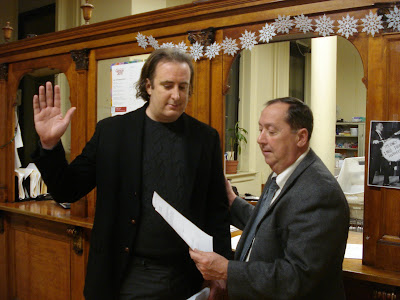 Sometimes in life, if you live long enough and have a little fortune you get to see justice in the world, giving a boost to the heart, a lift in your feet, and a tad more spiritual zest to keep pressing ahead.  Over the last year, Da Horsey felt mauled by the corruption in the Soprano State and it hit pay dirt with the arrest of you know who up on Bloomfield St.  In the course of those events we kicked off Mile Square View never knowing it would pull us deeper into a place where others have been fighting valiantly not for months, not for years but in the ballpark of decades.  This ode is dedicated to all of them.

Attending a community meeting last summer another animal approached Da Horsey stating "I have the answer to your question."  We had spotted said creature a couple of times before and someone pointed out the role he played in "People for Open Government."  Didn't sound like a very profitable venture to us.  Was that like some obscure branch of a Ralph Nader group funded by cake sales in neighbors backyards?  Little did we know.
And so it came we got into a long chat that evening leaving St. Matthews Church.  The Coyote was shocked to hear yes it's that horse and noted his repeat visits to MSV to see what Da Horsey was up to next.  Not a year later, we've come to learn better his impact on all things good government in Hoboken going back to the early 90s, his religious attendance at City Council meetings and his efforts in open, accountable government as a former President of POG along with numerous entertaining and critically researched submissions to MSV, the Hoboken Journal, Hoboken Revolt among others.
Most of you know I'm speaking of Eric Kurta.  And last Wednesday after years of ploughing in less than fertile soil, he dug in a little deeper offering to join the effort helping on the Hoboken Hospital Authority overseeing HUMC.  The short culmination of the vote leading into his appointment was short and sweet but it offers a window into the soul of Hoboken, past, present and future.  A quick look at the video below:

What makes this short video of just about a minute so utterly classic is the brief exchange between Councilman Mike Russo and Mr. Kurta.  The contrast and yes the clash of ideologies here is no smaller then President Ronald Reagan going toe to toe with Mikhail Gorbachev and Reagan wouldn't yield an inch.  And just like the Soviets, Councilman Russo is forced to yield to the inevitable force of the Wiley Coyote.  The Road Runner has been running Hoboken for a good long while (and practically into the ground) but there's hope for a well timed pivot just as the Wiley Coyote has caught his prey.

Now why Councilman Russo thought a Hoboken citizen's contribution to a candidate's campaign was germane in this appointment speaks volumes about the thought process and old style governance in town.  As exhibited in the old Tammany Hall style videos shown here and here government is all about your friends: taking care of yours, making new ones and creating loyalty and fidelity to your patronage fiefdom.  The apple indeed does not fall far from the tree.  The sweet irony captured in the short video clip: it's the Eric Kurta's of the world who have fought to make campaign contributions public and anyone could see before the meeting in an ELEC report that Mr. Kurta had in fact ponied up and bet on a horse who won the last election.  But so what?  From where Councilman Mike Russo sits, that's all that matters, credentials, service to Hoboken and the fact this position is entirely about unpaid service to Hoboken probably in the most critical city institution at this moment is hardly a passing thought.  Councilman Russo doesn't even have one questions for Mr. Kurta on his credentials, how he may in fact contribute to the Hoboken Hospital Authority in its oversight over HUMC.

Oh but there's more.  Right after the solitary monetary question, the video clip captures how upset Councilman Russo feels at these turn of events.  He's rocking in his chair and looks around visibly unhappy.  But where are his allies of yore to offer comfort and support?  None can be found and he rocks his chair steadily in the paced manner of a caged animal prowling in limited space looking for escape.  This is not the Hoboken bequeathed to him by Daddy.  The completely non-pulsed manner in how Mr. Kurta answers Councilman Russo makes it all the better.

You know sometimes you just can't name a price for this kind of entertainment.  And in these rare moments where justice plays a key part, it's absolute food for the soul.

Related: Another coyote was spotted in New York City's Central Park, relation unknown.
What makes SmartyJones the most beloved horse in America.  The answer is in this video.
.
Posted by SmartyJones at Saturday, February 06, 2010
Ode to the Wile E. Coyote
2010-02-06T11:44:00-05:00
SmartyJones
Councilman Mike Russo|Eric Kurta|
Comments