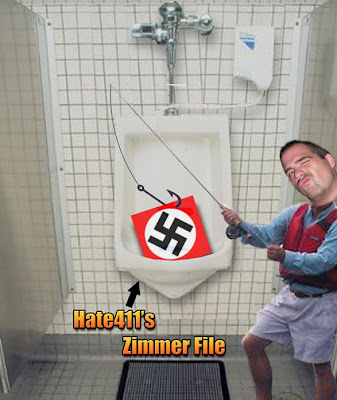 On occasion we've noted with laughter when people have been caught writing replies to themselves on the NJ.com Hoboken forum.  But no one there can hold a candle to the king of such missives, the proprietor of Hoboken411 or Hate411 as pictured here.


A reader sent over Hoboken411's latest "email letter" to himself last week where he once again proclaims his hatred of all things Mayor Zimmer and her administration.  This time he uses the Holocaust for a few chosen personal attacks.  What a guy.


Let's take a closer look at the rantings of one imaginary resident - "Louise F." *
Once again, Mayor Zimmer is giving us yet another excuse as to why she can’t give us the HPD Audit. In the past, she has blamed former Mayor Dave Roberts and Fiscal Monitor Judy Tripodi for her own broken promises, but now she’s blaming the state, specifically Susan Jacobucci, Director of Division of Local Governments Services. Mayor Zimmer went too far this time.


Now I don't know about you but I've yet to hear any resident of Hoboken, neighbor or otherwise come out and defend Susan Jacobucci or the State for that matter for withholding the Public Safety Audit on the Hoboken Police Department.  Nor have we heard anyone remotely sane even attempt to blame Mayor Zimmer for the report being unavailable.  Hoboken411's lame attack is the dead giveaway this is yet another of Perry Klaussen's demented creations.  Yes Perry, Mayor Zimmer went too far this time.  The New Jersey Star Ledger also joined in last week, the very next day after the press conference agreeing the report should be immediately released.  (Shouldn't we let Louise go back to making health insurance commercials now?)


Isn't there a Hoboken411 minion available to proof read this for the obvious?  Hoboken411 continues:


Yesterday at a press conference, Mayor Zimmer compared her inability to get the HPD audit from Jacobucci to the serious plight of Holocaust survivors waiting for a boat and being told “not yet.” I know that Mayor Zimmer could not possibly think that the delay in the audit is a life and death situation so for her to take these exploitative measures and use the Holocaust as a means to garner sympathy for herself as if she was a victim is truly insensitive, egotistical, and offensive.


Perry Klaussen obviously knows nothing about history so with all his hatred and bile, he couldn't permit himself to possibly see that Mayor Zimmer's reference here was an "anecdotal story" about her in-law and his sister exiting Europe via the safety of Spain.  Spain had allowed Jewish exiles access in the middle of 1943 and people were escaping the Nazis through the country.  Mayor Zimmer as seen in the video of the press conference is recounting the Spanish word for tomorrow, "mañana" and showing a colloquial application that the literal translation fails in its secondary meaning of "not yet."  Having videotaped the entire press conference, anyone is free to see for themselves that's what the Mayor said and meant in its true context.  That Perry Klaussen in all his eager cacophony of lies would sink to the level of using the Holocaust as a means to personally attack Mayor Zimmer speaks to his complete lack of character and depravity.


Last, Hoboken411 begins the piece with a complete non-sequitir.  Another dead giveaway of a very troubled mind:


Mayor Zimmer is lazy and offensive. 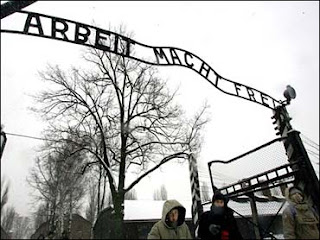 Sign over Auschwitz: "Work will set you free" in German


Gee Perry, at least you didn't say - work will set her free.  Yes, Perry we know you are upset everyone is ignoring you.  Yes, you are a three time loser in the last year of elections as self-proclaimed election kingmaker and yes, Hoboken411 won't be getting taxpayer money as you wanted to make "Hoboken public announcements."  All the noteworthy Hoboken websites in town including the newest Hoboken.patch.com are happy to do it as a public service free of charge.  We doubt Councilwoman Beth Mason will be suggesting Hoboken411 be "authorized" for posting Hoboken public notices (with pay no doubt) any time soon.  It crashed harder and faster than the Hindenburg when she proposed it last year in the City Council.
That's too bad.


Graphic: courtesy of the Grafix Avenger, size does not fit to scale or heft.


* MSV did a complete search on any Louise F in Hoboken.  We found none and highly doubt one would come forward and vouch for the authenticity of this Hate411 screed.  No one is that nuts.


Update: February 9 - Reader Redraven asked if Hoboken411 was at the press conference?  The answer is no.  The avalanche of lies, distortions and nasty falsehoods out of Hoboken411 during and after the election has burned many a bridge in this town. MSV doesn't need to send an email to City Hall to inquire on this one.  The latest hit job combined with using the Holocaust for cheap political attacks isn't going to make him any new friends either.


Hoboken411 has the access to view the full press conference MSV posted as anyone.  Placing it online in its entirety removes any shadow of a doubt as to the distortions and vile attacks.  This is normal operating procedure for Hoboken411.  If you think that will lead to an apology, forget it.  When caught redhanded, Hoboken411 resorts to complaining about his being a victim, no joke.  We experienced it firsthand in instructing him to remove the exclusive arrest photos from this website.


There's something wrong upstairs when a pickpocket steals your wallet and then complains when you say give it back and all they do is proclaim their victimization.  But that's what you're dealing with here.

iPad in the wild and Beth Mason 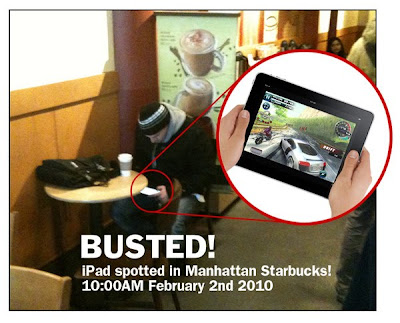 Spotted in the wild, this is a picture of a real NYC hipster doofus in a Starbucks sporting a real Apple iPad.  He's playing a game on it which Da Horsey is very unlikely to do.  (All about productivity don't ya know.)

At the last City Council meeting, we wearied of dragging notebook and camera gear and told a friend of the stable the idea of grabbing some suds later was unappealing dragging around .

So, just the other day my best friend from high school (who happened to marry a girl in Hoboken and moved here no less) asked me about the iPad.  I told him what I always tell him when people ask me about this stuff (for some reason people think any experience in technology means you know everything about all the available personal computers), what do you want to do with it?  He mentioned the usual email, web stuff, some excel type spreadsheet stuff.  I told him Apple had a spreadsheet program, but it isn't excel for the iPad.  He's interested and considering his lack of knowledge about computing, it certainly says good things about this product's March release.

It's weight is perfect for traveling around, just a pound and a half and would be perfect for blogging at City Council meetings.  By the way, setting up a wifi network is not expensive and the folks at City Hall mentioned they plan to set one up.  The Hoboken Journal needs to hold a raffle or a fundraiser so MSV can do some better onsite work.  Whaddaya say Jolly Green Giant?  Let's do an event at the Elysian!

Beth Mason just made a release.  It follows at the jump.  She says Hoboken is facing another tax increase and cuts need to be made.  She did speak a lot about the cuts needed at the last City Council meeting and noted the lack of bravery by her colleagues.  Okay, fair enough but where's the cuts?  MSV would like to hear bravery from any quarter in that respect.  So, Councilwoman would you care to take yourself up on that offer?

While everyone was looking forward to Super Bowl Sunday and having a pleasant evening, a fire on lower Park changed the day for residents.  Claire Moses of Hoboken.patch.com reported on the story.

Hoboken Mayor Zimmer and Public Safety Director Angel Alicea were both on the scene.