- Posted by Jhnnynewman, intrepid photographer via iPhone
Posted by SmartyJones at Wednesday, February 17, 2010

Like Phil Collins, some nights gets us more pumped up than others.  And tonight we think should prove rather interesting.

The Hoboken Journal will be running with a live blog tonight.  See ya there at 7:00!

Posted by SmartyJones at Wednesday, February 17, 2010 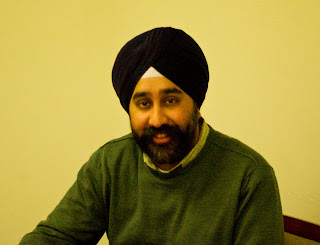 Councilman Ravi Bhalla is relatively new to Hoboken's government elected last spring as an at large Councilman.  Last Thursday, Da Horsey sat down with Ravi to discuss the big issues of the day including the current budget, union contracts, and the accounting treatment for the $4.2MM pension issue in Hoboken.  The interview was quickly paced by events the very next day.

An email by the State Fiscal Monitor Judy Tripodi Friday to a member of Hoboken Revolt, a local organization of citizens concerned about taxes and fiscal responsibility in government suggests a conclusive contract with the police union may be eminent and the finality of it is beyond local and state officials or new facts on the ground.

In the email, Judy Tripodi states:
"What happens in the State has absolutely nothing to do with the City'scurrent contract negotiations.  The proposals made by the governor for theState employees relate to all new hires, not current employees or retirees.Besides, I began these negotiations long before Mayor Zimmer and the 4 newcouncil members were elected and long before Governor Christie was elected.Everyone has known about the police report for a very long time and it wasagreed upon by all parties that the report would not have any impact on thenegotiations.  The results of the report would be handled by other actionsundertaken by the City."

Councilman Ravi Bhalla touched on the recent action by the fiscal state monitor to move $1.5MM in funds back into an operating account in anticipation of retroactive payouts to the police department in a potential union contract agreement.  Speaking from his downtown Hoboken law office the Councilman  described the financial moves as premature saying "The problem was this line item was unclear, if and when we have this expense...But frankly it's insulting to me, it's insulting to the Council to suggestively attempt to possibly usurp our authority with respect to the ratification process."

Noting the actions by the fiscal state monitor overruling the City Council on earlier emergency appropriations, concern over the approval process for a potential union agreement may be rapidly approaching.  On the question of the fiscal monitor moving to finalize union agreements without the City Council's approval and what possibly legal grounds the City Council has to object, the Councilman noted, "We already have that legal right.  We can ratify or not ratify the (union) contracts.  The contracts are not there for us to rubber stamp."

Although Councilman Bhalla clearly believes the presence of the fiscal state monitor does not diminish the rights of the City Council in any contract approval(s), he emphasized the desire to work with Judy Tripodi and the mayor stating "Our ultimate goal is to cooperate."

Councilman Bhalla also runs counter to the fiscal state monitor's conclusion that both the police audit and the state legal mandate under consideration to contribute 1.5% to health care costs are in fact not areas for consideration in any union agreement. The Councilman doesn't rule out the State may in fact increase the contribution to a 3% contribution for all state employees mentioned in a Star Ledger editorial last week.

On the expectations about taxes and the voter's will expressed in Mayor's Zimmer's victory last November, the Councilman didn't stray from his earlier pronouncement at the first Budget Workshop  "One of my objectives as a council person is to play my part in advocating for tax relief.  One means to achieve that goal is to lower the cost of government.  One means to do so is to look at what drives it.  In order to lower the size of government, we need to address personnel."

Another area of concern the Councilman expressed was on the introduced budget and the increases built in as presented by Judy Tripodi. The budget presented assumes increases across the board for city workers in both the current fiscal year and the next beginning July 1.  "I strongly disagree in any wage increase for non-uniformed employees for this budget year.  We have to tighten out belts...We need to lead by example." Mr. Bhalla noted with some surprise when prompted the lack of support by Councilman Nino Giachhi to forego a $2,000 increase as he suggested during a recent City Council meeting.

On why there's been no specifics proposals on budget reductions and in response to Councilwoman Mason who said her colleagues lacked the courage to make cuts and Councilman Russo (both failed to participate in last Saturday's budget workshop).  "Council persons Mason and Russo have spoken in generic terms about cutting the size of government but they haven't said anything about the big elephant in the room, public safety."  In the bigger picture, the Councilman agreed that both the Council and the mayor still did not have the analytical tools from audits, including the police audit to responsibly implement any significant changes.  He suggested elected officials could propose 10% reductions to Department heads and ask them to demonstrate how they would do so.  He complimented Director Leo Pelligrini for "getting the memo" and how he "showed a net decrease of $87K." *

Like the mayor, the Councilman concludes the problem still undecided on the accounting treatment for the $4.2MM pension issue will be central in this fiscal year's budget.  Considering the impact of paying over $4 million at once in a budget under $100 million in just the few remaining months of the fiscal year, Mr. Bhalla said, "If we want tax relief, an option would be to spread that costs over a period of years.  It's one or the other."

Related: In an article from The Star Ledger, the pending State pension reform heading to the Governor's desk specifically states all state employees would have to make a contribution to medical costs, not future ones.  Hopefully, the fiscal state monitor will note that fact.  From the article:


THE REFORMS
The four officials could not provide a formal estimate of the savings, but said the amount would reach billions over the next decade. The reforms to be proposed Monday include:
• Requiring all current public employees to contribute at least 1.5 percent of their annual salaries toward their health benefits, and all future retirees to contribute at least 1.5 percent of their base pension to their health benefits. State employees were required to contribute at that rate beginning in 2007 under then-Gov. Jon Corzine, but many local governments and school districts do not require any health care contributions. The minimum threshold would be incorporated into upcoming local contracts, and governing bodies could try to negotiate it higher.

Related: Hoboken.patch.com - in an interview posted earlier, reporter Claire Moses notes Councilman Russo expects to be mayor one day.  (Maybe that explains my friend uptown getting his robocall to wish him a "Happy Holiday" last December.)

City of Hoboken, February 17th, 2010 - Hoboken Mayor Dawn Zimmer said the City will dedicate the First and Adams streets area as “Amato’s Way” in honor of the late City Councilman Andrew Amato, who passed away at age 78 on February 4th.
“Andrew Amato was an integral part of Hoboken’s social and political fabric for decades,” said Mayor Zimmer. “I’ve asked the City Council to designate the street as ‘Amato’s Way’ in honor of his lifetime of public service to our City and his dedication to our residents.”
Amato served as the Fourth Ward City Councilman from 1991 to 1995. He was the City’s Public Works Director from 1977 to 1981 and also served as the Confidential Aide to Mayor Steve Cappiello from 1981 to 1983.
Amato was noted as a civic leader through founding the Andrew Amato Civic Association, serving as Standard Bearer of the Hoboken Regular Democratic Association and sponsored a Little League team. He volunteered for many years to serve the needs of senior citizens by sponsoring holiday parties, trips to Atlantic City and providing Bingo equipment and other goods.
Amato is survived by his wife, Florence, three children and seven grandchildren.
# # #
Again, here's a classic clip of Andrew Amato from the 2005 Council debates, courtesy of Eric Kurta:
Posted by SmartyJones at Wednesday, February 17, 2010
Andrew Amato honored with "Amato's Way" Street
2010-02-17T09:51:00-05:00
SmartyJones
Amato's Way|Hoboken honors Andrew Amato|
Comments