10th Annual Event Saturday Featuring Inspirational Speakers, Three Honorees
HOBOKEN -- The 10th Annual Richard Hicks Black Youth Empowerment will focus on building career-opportunity awareness among young people in Hoboken, with an emphasis on the African-American community. The event will take place starting at 1 p.m. this Saturday, Feb. 20, at the Boys & Girls Club of Hoboken, 123 Jefferson Street, with food and beverages provided by Andy’s Supermarket of Jersey City.
Representatives from the Hoboken police and fire departments, the National Society of Black Engineers, the Stevens Institute of Technology and several other organizations will make presentations on job opportunities, career goals and ways to pursue education and self-empowerment. Other motivational speakers will include Hoboken Housing Authority Executive Director Carmelo Garcia, STY Academy Organization Founder and Director Luis Acevedo and Minister Shirley M. Dennis.
Three honorees will receive special awards:  Ora Welch, president and CEO of HOPES Inc., will receive an award from the City of Hoboken for her service to the community in helping low-income families empower themselves by expanding their skill sets and developing career paths. Jalin Miles, a 16-year-old student, will be awarded for outstanding academic and athletic achievements and working to help and inspire youth throughout the community. Saquan Williams, a 17-year-old senior at Hoboken High School who has distinguished himself through his academic and extracurricular achievements and his leadership in the STY Academy. The awards will be presented by Hoboken Health and Human Services Director Leo Pellegrini, Housing Authority Executive Director Carmelo Garcia and Housing Authority Commissioner and newly appointed STY Academy Organization Vice President Jake Stuiver, respectively. 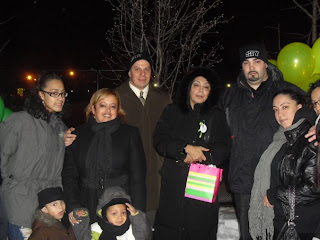 MSV asked the new VP, Jake Stuiver to explain the impact of the organization in the Hoboken, "The STY Academy Organization has done great work to help young people, particularly in the Housing Authority community, to stay out of trouble and channel their energy toward creative outlets. Just last night, there was a vigil that's held annually at Fifth and Jackson streets honoring the memory of a young man who was killed three years ago in gang violence. That incident fueled the momentum behind building the Save the Youth Academy to create more programming to give young people an alternative to gang activity. I have been working closely with the founder and director, Luis Acevedo, on a number of positive programs over the past six months, and because we share a vision for the community and an eagerness to put all our energy and passion behind it, we got to talking about having me join STY in an official capacity, which I am proud and honored to do. And the timing is good, because Luis had been carrying the administrative load for quite some time, and I'm happy to take some of the work off his hands, apply the skills I bring to the table however I can, and help make the organization even more effective." 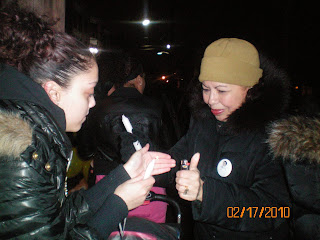 An angry Hudson Shark frustrated by the lack of web hits and bounced paychecks from political paymasters took it out on SmartyJones last night in the City Council.  Still angry and very bitter, he hijacked the microphone and accused Da Horsey of "not doing a good job for this town."

If you ever wondered what happens to embittered political hack operatives, here is your answer.

Mayor: Zoning Officer on Board

Mayor Zimmer Announces New Zoning Officer
Mayor Dawn Zimmer announced today her appointment of Ann Holtzman as Zoning Officer, effective February 22nd.  "Ann Holtzman will be an excellent addition to our City,” Mayor Zimmer said. “She has been passionate about Hoboken’s community development for many years, and is a strong voice in our community for balanced development and fair process.”
Ms. Holtzman has been involved in Hoboken’s development community for many years. She was integrally involved in Hoboken’s Master Plan preparation process, as well as having years of experience refurbishing and renovating buildings in town. Ms. Holtzman also has extensive management experience. She has pledged to focus on making the Zoning office not only user-friendly, but a public resource for information and guidance.
“I look forward to working with Ms. Holtzman to ensure the zoning office runs as smoothly as possible for the citizens of Hoboken,” Mayor Zimmer said. This new hire brings the Zoning office to full staffing to meet the needs of Hoboken. “We can now begin integrating all of our Community Development departments to work in better harmony together.”
Talking Ed Note:  Usually we don't say much with an official announcement but just last night we had a chance to get a picture with Ann sitting two seats away in the City Council Chambers.  We told her to lean away as we didn't want to get a "civilian" in the shot.  Little did we know.
Congratulations to Ann and best of luck in the new position!
.
Posted by SmartyJones at Thursday, February 18, 2010
Mayor: Zoning Officer on Board
2010-02-18T14:22:00-05:00
SmartyJones
" Hoboken Zoning Officer|Ann Holtzman|
Comments

Superintendent to teachers, administrators - You're Fired!

Okay, it didn't happen here in Hoboken or even in New Jersey but the parallels the state faces are very similar to Rhode Island overall.  Now this superintendent who fired every teacher and administrator, one has to wonder do you think among all the great references over his career, a few from this local Machine would kick back a red flag?  Maybe we should keep this guy on the back burner in Hoboken.  You know like in case Mr. Romano decides he's had enough of being sniped at online and decides to walk after some legal action.  That's just what Hoboken doesn't need.  What about a 7-2 vote don't some understand.  Let's move on.

Update: This parallel story to the ills New Jersey faces in education and beyond has generated some debate of late.  It's even generated heat pointed at Da Horsey over one member on the board named in a recent Hudson Reporter story as seeking to reopen the process for a candidate they favored close to Corey Booker.  For the record, MSV is not the source of that story.

And on that note, let the debate continue.