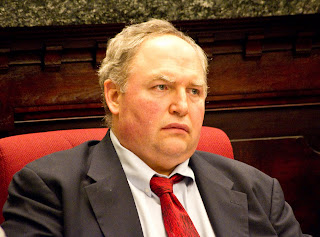 Councilman Mike Lenz in a phone interview earlier with MSV called the police audit's release a "game changer" impacting the current police union negotiations thought by some observers to be near completion.  "I think there's more negotiations to do on the contract that's fair to the workers (police) and to the city.  There's a role for the City Council and the mayor to play and there's a lot more work to do," the Councilman said in a veiled reference to the union negotiations Judy Tripodi has been looking to finalize with the police union.

Last week Judy Tripodi, the fiscal state monitor charged with overseeing Hoboken's finances downplayed any impact of the changes blowing through the State both from Trenton and the current Mayor and Council elected last year describing her efforts leading the negotiations being previous to their arrival. In addition, the fiscal state monitor described the report she has held in draft form going back to last year as nothing new in an email statement last week to Hoboken Revolt, a local tax reform group.  "Everyone has known about the police report for a very long time and it was agreed upon all parties that the report would not have any impact on the negotiations." Who the "parties" are in Judy Tripodi's statement is unclear but it's obvious Councilman Mike Lenz does not share that assessment.

In fact, Councilman Mike Lenz says otherwise.  On the rumored retroactive raises to the police leaked to the Hudson Reporter while the fiscal state monitor was on vacation,  Mr. Lenz added, "I don't think there's any support on the Council in regard to paying retroactive salary increases.  In light of the report, the fiscal monitor won't... don't see how she could."

Timothy J. Carroll of the Hudson Reporter originally reported the retroactive raises over the last two years would be 3.9% with 2.3% this year and next if the police contract was finalized.

Related: Councilman Ravi Bhalla in an earlier interview with MSV stated the City Council had the final authority on ratification of any union contract.

Also Breaking:  Lt. Angelo Andriani's pay has been suspended, effective today based on a story just posted by Claire Moses of Hoboken.patch.com

Office of the Mayor announced:

Statement from Mayor Zimmer on Receiving the Operational Audit of the Hoboken Police Department
On Friday at 5:00 PM, I received the long awaited Operation Audit of the Hoboken Police Department from Division of Local Government Services Director Susan Jacobucci.
I’d like to thank the Division of Local Government Services for all the hard work that went into producing this report. I’d also like to thank Lori Grifa, the new Commissioner of the State Department of Community Affairs, for giving this matter her personal attention to ensure this long awaited report is finally available to Hoboken’s government officials and to the public.
I look forward to working with the public safety committee of the City Council, Public Safety Director Angel Alicea, Police Chief Anthony Falco and the DLGS to determine the best course of action to implement the recommendations contained within the report.
Thank you,
Mayor Zimmer

Talking Ed Note: In a brief conversation with Dan Bryan, Special Assistant to the Mayor, MSV inquired on the original plan to give Police Chief Falco and Public Safety Director Angel Alicea a week to review the document before its release.  The change came about due to an OPRA request.  As a result, the mayor's office decided to go ahead with a full rather than partial release.
.
Posted by SmartyJones at Monday, February 22, 2010
Police Audit
2010-02-22T09:30:00-05:00
SmartyJones
Hoboken Police Audit|Mayor Dawn Zimmer|
Comments