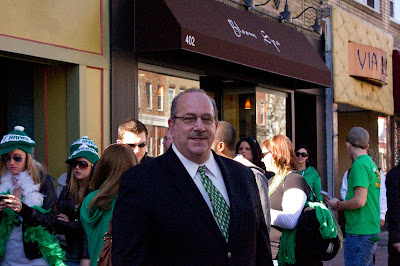 Making our way through Washington Street just after the parade, we ran into several folks who corralled Da Horsey to have a few words and more than one was an active candidate in the Hoboken BoE election.

Frank Raia looking well after his brief hospitalization tossed a rope and caught MSV for a few minutes.  As usual, we had a nice open conversation with some quick Q&A and shared personal observations.  Although Da Horsey is not convinced Frank follows the trails of Da Horsey online, our colleague Jimmy the K believes otherwise based on the exchange.

Frank discussed his concerns about building expansion required to accommodate the growing school age population and the lack of a plan offered by others, or in this case the current Kids First majority.  To our concerns about the mismanagement on the BoE while he served, he stated he's only one vote.  This won't be the last word. We owe Frank (and his slate) some attention too and we'll follow up with him in order to do so.  So we'll reach out and have some discussion in order to give a fairer voicing than the rushed chat with the full St. Patrick's Day churning around us.

Hey it's campaign season.  In all the haste yesterday, we completely forgot Frank had just been laid up in the hospital.  Frank looked good and we wish him continued good health!