Update: Arrests totaled 25 but there's no breakdown and MSV is looking for a breakdown including DWI.


MAYOR ZIMMER SEEKS PUBLIC SUPPORT FOR
WATERFRONT WALKWAY RECONSTRUCTION FUNDING
City of Hoboken, March 11, 2010 - Hoboken Mayor Dawn Zimmer is asking residents to show their support for the City’s $2 million application to the Hudson County Open Space Trust Fund to finance a portion of the restoration of the damaged sections of the waterfront walkway at Sinatra and Castle Point Parks. Last night, the Hoboken City Council approved a $12 million bond to begin the multi-step process to repair these segments of the waterfront walkway. Approval of the $2 million application is vital in helping to cover the City’s costs for the project.
Residents and visitors are asked to download sample form letters from the City’s website, hobokennj.org., urging support of the funding. Residents and visitors of all ages are encouraged to use the sample form letters as a template to create their own communications. Letters should be sent to Mayor Zimmer’s office to be added to the grant application.
“Our waterfront walkway, parks and playing fields are among Hoboken’s greatest recreational assets,” said Mayor Zimmer. “Unfortunately, the cost to repair the damage from last year’s collapse would be an unfair and costly burden to be shouldered solely by City taxpayers. It is imperative that we receive financial relief from the County to restore and maintain our public assets.”
The collapse of the damaged sections of the walkway at 5th St., adjacent to Sinatra Park, and 7th Street, adjacent to Castle Point Park, has limited public access to the Hudson River Walkway and adjacent parkland.
The Mayor and Hoboken City Council have initiated a request to the County’s Open Space Trust Fund to finance the project. “It is important that we show public support of this application by the residents and visitors who utilize our waterfront and value this significant and historic asset,” Mayor Zimmer said.
# # #
The link to the City website with sample letters is available at here.

Mile Square Exclusive
In an interview just after the conclusion of the special City Council meeting, Councilwoman Beth Mason twice stated "I don't know" to a question whether her cameraman's videotape of the BoE meeting Tuesday would be used for political purposes in the upcoming BoE election. 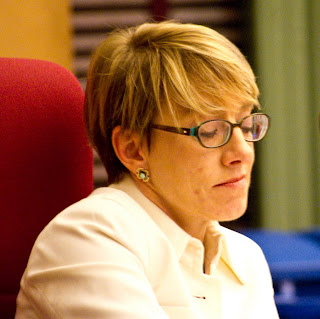 "I don't know" on political use of tape
Last April Councilwoman Mason declared neutrality on the BoE race that led to a Kids First victory changing the dynamics of Hoboken leading into the mayoral elections in the spring and fall.  Asked if this was the case this year as well, the Councilwoman indicated yes.

Concerning the sudden appearance of her cameraman filming Tuesday night's BoE meeting, the last before the April election, the Councilwoman said it was "for transparency" due to the BoE not filming "of late."*  Questions on the potential use of the tape led to the Councilwoman declaring her videos were only used "in their entirety."

This followed with questions of partial edited videotapes posted on the internet leading into the November election on youtube under the moniker "Stop Hiding the Budget" - a reference to charges made during a City Council meeting that then Acting Mayor and City Council President Dawn Zimmer withheld information that would be "damaging" to her election. Councilwoman Mason initially stated this was City of Hoboken video but MSV insisted it maintained a copy (since removed from youtube) and the camera angle revealed it was not the City's but from her cameraman and clearly edited for political purposes on youtube.  Councilwoman Mason then would neither confirm nor deny the tape's origins stating it was perhaps someone else's video as there were others "shooting" with cameras leading into the election at City Council meetings.

To the final question on whether her video would be similarly used for political purposes, Councilwoman Mason paused before saying, "I don't know."  Asked again she paused and started to turn away quietly saying again, "I don't know" concluding the interview.

* A Board of Education source stated there have been no problems filming any of its recent meetings including last Tuesday.

Taxes go down, sorta - one half of a percent 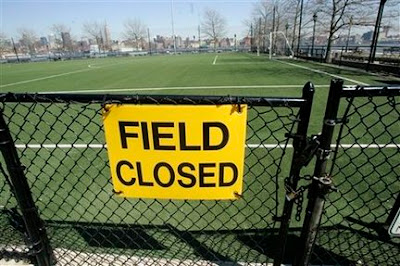 Tonight's City Council meeting was a rather drawn out affair especially considering the limited topics for the special meeting.  The Sinatra Park/Castle Point bonding for $12 million for repairs due to underwater shipworm damage eventually made its way to approval but not without substantial misunderstanding from the public.  Before the professional presentation on the scope of the work, the public spoke and it was clear the lack of clarity surrounding the bonding process and how it is linked to applications for grants went over many people's heads even when it was later explained several times leading into the vote.

It's somewhat frustrating to see people argue about the $12 million bonding as if it's spent money or money guaranteed to be spent.  It's actually not.  Hoboken will retain the right to bond for the money as necessary, but only after the process of obtaining grants is clarified.  Lennox Consulting, the firm working to identify available grants did not guarantee the results but thinks it can make some headway on the issue.  The payment is $10K in total for that effort over four months. In the hallway, MSV had a chance discussion among some other residents with the gentleman leading the firm but he would not state what could be actually anticipated.  However he did state it would not be anywhere approaching the $12 million thought to be required for the repairs.  If Hoboken can get somewhere near half, we should probably consider ourselves fortunate.

Also of note, Corporation Counsel Michael Kates indicated he would finalize his advisory on the recent $29,000 Condon contract and its potential ethics/pay to play issues by the next City Council meeting.  He made it clear he's taking the issue very seriously and will be doing a professional examination before issuing his legal opinion on the matter.

Of some significance, MSV had separate conversations with Councilman Mike Russo and Councilman Beth Mason.  The former was a candid discussion on expectations surrounding questions submitted earlier on 2008 campaign contributions and ELEC filings and the Councilman was receptive to a follow up regarding same.  MSV made clear it would extend adequate time before posting questions or additional findings in any follow up story.  To the Councilman's credit, he showed he is willing to stand up to the accountability he stated all elected officials should be held.  Although Councilman Russo felt he had addressed the questions posed in the last City Council meeting, we're not altogether clear about that finality and told him so.  Upon completion, a follow up will be posted.

After the Council meeting ended, a discussion with Councilwoman Mason centered on the BoE meeting the previous night and the taping of the session by her videographer.  This will be part of another follow up story.

As thought, absorbing the full inherited $4.2MM pension filing error under the Roberts administration wiped out any significant tax relief for the end of this fiscal year.  It's being paid out in total as the final months wind down to June 30th.  That decision was signalled earlier by Councilman Mike Lenz who heads the Finance Committee as part of an appeal process to the State but no one really believes this will deliver on its Hail Mary pass.  Councilman Nino Giacchi agreed to go along with the amendment to the budget that will officially lower taxes 0.53%*.  Yes, it's that small and is really just over half a percent.  Finance Director Nick Trasente making his last appearance before he moves on Friday confirmed the figure.  Councilman Russo noted this budget failed to deliver on a 25% budget cut and he's correct regardless of the political context and the fiscal state monitor's role in this budget cycle.  Councilman Giacchi made an artful pitch to follow the fiscal state monitor's urging to take advantage of the low cost bonding options and pay the $4.2MM over several years but the will of the Council was already set on absorbing the hit and moving on.  And so they have. 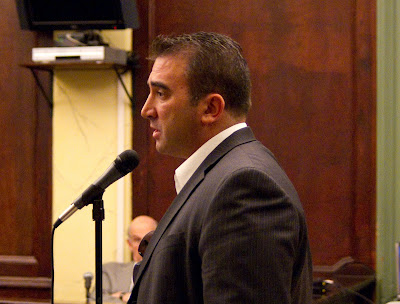 Talking Ed Note: Last night's meeting gave MSV an opportunity to personally thank the efforts of Nick Trasente (above) who moves on to greener pastures after Friday.  Some folks online have commented about his departure in almost a gleeful manner but MSV thinks Nick cleaned up a huge amount of problems in Hoboken's records most will never know and he was the guy in the trenches dealing with them.  Considering where this town has been with budget land mines planted everywhere over years, Hoboken really owes him some applause. Thanks Nick!

* The half a percent decrease will not offset the taxes increased in the first quarter due to tax appeals won against the City.  The offset to the second quarter ending this fiscal year is not altogether clear.  The burden and challenge to the mayor and City Council to address taxes will really begin in the next fiscal year, beginning July 1.