Horse Sense: As the grist turns... 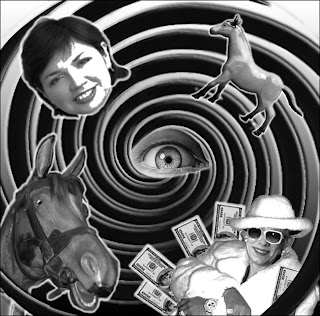 There's been quite an uproar with MSV's coverage this week unveiling political fun and games before they can be put into motion. With political operatives trying to spin and dance their way through the grist, a part two to this week's BoE election preview may be in the works.

Transparency has been a buzzword and all the rage in town since last year and the BoE is front and center with an April election garnering more attention than in other areas of Hudson County.  Councilwoman Beth Mason said her recent filming of the BoE was recorded "for transparency" but if you go to her website, there's nothing available on BoE meetings since 2008!  How's that for transparent?  In our on the spot interview after the last City Council meeting the councilwoman stated her videos are only shown in their entirety.  Well we're waiting and not just for video postings on the website.

With about thirty percent of Hoboken taxes dedicated to the BoE budget and the well poisoned with vitriol spewed on Hoboken websites leading to the departure of a potential Superintendent before he even started, more residents and especially parents are looking at the recent events in discriminating fashion.  What warrants their attention?

At the last BoE meeting, the official announcement said the budget had been reduced $2,250,000 from a year earlier.  But the big battle during the meeting was over a $3,000 proposed expenditure to send qualified members of the Hoboken Track and Field Team to Philadelphia for the Penn Relays, the oldest and most prestigious track and field event in the United States.  Board member Maureen Sullivan articulated her opposition to such an expenditure even though she had earlier approved a $1,300 fishing trip.  Even when the track team's coach (who had already obtained the Board's vote approving the trip) earnestly went to the microphone and asked Maureen Sullivan for her support if she could fundraise covering half the cost; Ms. Sullivan's response to this gift to the taxpayers was to spurn it out of hand and refuse comment snarkily equating it to President Rose Marie Markle's refusal to respond to the staged political commentary and conspiracy theories advanced by Lane Bajardi.  That's some moral equivalence!

Is this the objective approach to spending offered in the Maureen First "Real Results" website?  With her children removed from the school district, it's easy to point at sports and after school activities of other's children to generalize on spending cuts.  Another complaint Maureen Sullivan has mentioned is out of district kids, but now the figure on the website is 200 not the 300 she's reportedly said.  The current Superintendent Carter said in the last meeting he's going to review the registration process but won't announce it's implementation in advance.  So who has a "real results" idea as in a real world legal one?  Will Maureen Sullivan push this line all the while staying in the shadows saying nolo contendere.

Maureen Sullivan to our knowledge has yet to take one question in the public square since "resigning" from the Kids First coalition and the subsequent family launch of her Maureen First "Real Results" slate.  Right now it's a handful of folks sparring over at Patch.com about the issues that have arisen since.  What's interesting is not the spin but the evasiveness when certain points arise.  No discussion why fishing should be elevated over team sports/athletics. The subject is invariably changed. Well that's one way to never answer a question.  But when did it become acceptable for elected officials to do so?

Talking Ed Note: With the departure of the Hoboken Journal, there's no live online uncensored City Council chat available other than the general chat program we post from ustream.tv.  But there may also be a new tool to do so from City Hall during Council meetings (see below).  Click on some adds will ya or better yet hit the tip jar and feed Da Horsey!

Flood Warning and High Wind Advisory for City of Hoboken
Free Parking for Residents Residing in Flood Prone Areas
As a result of the weather forecast for heavy rain in our area and potential flooding, the City of Hoboken is providing free parking in a municipal garage this Saturday, March 13th beginning at 8 p.m. until Sunday, March 14th at 8 a.m. Residents who reside in flood prone areas with a valid residency parking permit will be able to park in Garage B (located on 2nd Street between Hudson and River streets).


Wind Advisory
High winds and heavy rain are expected in Hoboken this Saturday, March 13th. Be sure your property (including construction sites) is secure.

Bring in unsecured objects from patios and balconies and secure outdoor objects such as lawn furniture or garbage cans that could blow away and cause damage or injury.
The safest place to be during high winds is indoors. If at all possible postpone outdoor activities during a wind advisory or high wind warning.

Watch for flying debris. Tree limbs may break and street signs may become loose during strong wind gusts. Keep an eye toward nearby balconies for loose objects that may fall.
Report downed lines to 201-420-2007 (Hoboken Fire Department) or 911 for assistance. Do not try to free lines or to remove debris yourself.
Avoid anything that may be touching downed lines, including vehicles or tree branches. Puddles and even wet or snow-covered ground can conduct electricity in some cases. Warn others to stay away.
Posted by SmartyJones at Saturday, March 13, 2010
Rain, rain go away
2010-03-13T08:47:00-05:00
SmartyJones
Comments