Tonight's a big agenda features a lot of the hard work (and decisions) made on the budget.  The newly employed Budget Workshops reduced $700,000 to the bottom line and hard decisions were made on eating all the $4.2MM of the Dave Roberts pension follies in the last few months of this fiscal year.  Although MSV leaned toward Fiscal State Monitor Judy Tripodi's proposition on bonding this cost over a reasonable amount of time, in retrospect this action has merit.  Sinatra Park's repairs is in the early stages of seeking needed grants and it's unknown how much of the $12 million needed will become available.  So although that $4.2MM hit cost us any significant tax cut for this fiscal year ending June 30th, it looks to be the right call.

Tonight the potential police contract is front and center and with the new Governor's brave new world just announced in his budget speech yesterday, the agreement at first reasonable some months back, now appears archaic with the pace of statewide reforms and headed for a reval, pardon the pun.

More follies, more hijinx, more Hoboken City Council with poseurs and workers all mixed together to make for a grand show.  Let's see who comes to do the serious business of the City and who operates in the words of the Governor, "What's in it for me" mode?

Live chat will be up and available also at 7:00.  Expect it should be working again and of course the big bonus is it's uncensored by the smear merchant uptown.  If you have never gone to a City Council meeting, tonight would be an excellent pick.  It's far different than watching the stream as you can see and pick up a lot more than you'd think.  You also have the option of going up and sharing a few thoughts before the votes are tallied.

Jimmy the K, MSV executive publisher taught us that valuable lesson.
Da Horsey has been going ever since.  See ya at 7:00.

REACTION FROM HOBOKEN MAYOR ZIMMER TO GOVERNOR CHRISTIE'S BUDGET SPEECH
Yesterday, Governor Christie reported to the State Legislature on his plan for the State's budget. In his speech, he candidly acknowledged the extent of our State's fiscal difficulties which he noted had been years in the making.  The Governor said:
"We did not dig the hole in which we find ourselves in a day or a year.  The massive gap between our resources and our appetite has built up over twenty years.  It has been dug by a lack of discipline and unwillingness to say no; made deeper by poor policy choices along the way and quick fixes to avoid tough decisions…..In recent years, we have allowed the problem to become bigger through a series of one-time gimmicks that have worsened our situation."
The Governor was speaking about the State of New Jersey but he could just as easily have been describing the state of the City of Hoboken.
Tonight the Hoboken City Council will consider adoption of a budget that, unlike many in the recent past, is honest, transparent and includes no “one-time gimmicks.”  Rather than “kick the can down the road,” this budget makes significant progress in paying off the costs of the mistakes of the past.
Approximately $6,000,000 of this year’s appropriations, 10% of our tax levy,  is a legacy of the past having absolutely nothing to do with the cost of running the City this year.   While paying these costs has prevented us from being able to deliver meaningful tax relief this year, it will help us to put the past behind us so we can move on to a fiscally responsible future.
The State’s fiscal difficulties have made it necessary for the Governor to propose significant cuts in aid to municipalities such as Hoboken. To help us cope with the diminished resources, he has promised to give us the tools that we will need to control our own spending, in the form of reforms to our collective bargaining and civil service systems. I urge the State Legislature to move quickly on these reforms, so that municipalities can end the destructive cycle of increasing costs that has led us to where we are today.
But my hope is that these tools will not be necessary for Hoboken to make the changes that we need to make.   It is time for all of us to recognize that we need to adapt to the realities of the present and future, and make the shared sacrifices that are called for by our difficult times.
Thank you.
Mayor Zimmer 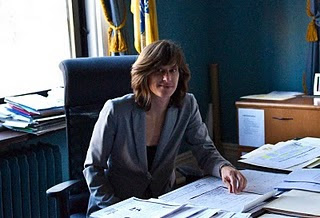