Guest of the Stable: Gregory Bond


Video Synopsis: As a Hoboken High School student, Judy Burrell was scouted at the Penn Relays which got her a full scholarship at Utah State. Today she's a math teacher and the head track and field coach at Hoboken High. For the first time in 7 years, the Hoboken High track team has qualified for the Penn Relays, one of the biggest track and field meets in the world. But with a School Board election only a few weeks away the team finds itself the focus of a slate of cost-cutting School Board candidates.


I felt this video had to be made. I was in the audience at the Board meeting when Judy Burrell made her appeal and I was impressed that Hoboken students had qualified for such a prestigious event. I was even more impressed when Judy so eloquently told her own story. And then, I was completely dumbfounded when Maureen Sullivan decided to take issue with the track team's request and vote against funding the team's expenses.

Some may say that it's not right to involve the students in a video with a political message but these students know that it's politics that determined whether or not they would receive their funding. They were in the audience when Maureen Sullivan voted against them. And, with only a week to go in a hotly contested School Board election, the students also recognize that if Maureen Sullivan's tax-relief slate is elected then their future is threatened. So this isn't just a story about athletic accomplishments, it's also a story about politics.

The Kids First slate has done an admirable job of maintaining a positive message during this campaign. But Maureen's slate has been negative right out of the gate. Being a Kids First supporter, and knowing all the good they've done for the school system and taxpayers in just one year, it's been frustrating for me to watch Maureen and her slate endlessly spout mistruths and uninformed prescriptions for the school system.

After that School Board meeting I realized that this was a story that perfectly captures the danger posed by Maureen's slate. This was a story that perfectly illustrates what's at stake in this election. While her slate has been vague overall about about what they intend to cut if elected, Maureen's vote that night and her slate's website make it abundantly clear they intend to cut athletics. And this gets to the heart of the matter. While tax relief sounds like a great idea, tax relief without regards for the students is destructive. It strikes a blow at the heart of our city. This city will grow stronger as the city's public school's grow stronger. Making them weaker in favor of tax relief weakens the city and ultimately harms taxpayers.

In contrast to Maureen's slate, the Kids First slate is taking a sensible approach that balances cost-cutting and fiscal responsibility with the strength of the schools and the well-being of their students. This approach goes beyond the vague proclamations of Maureen's slate - it's a proven approach that's been in place for a year now. The budget has decreased, the school's are stronger, and Hoboken is all the stronger for it.


This is the public portion at the end of the meeting. Click ahead on the scroll towards the thirty-one minute mark when the Hoboken Board of Education Attorney intervenes and calls for law enforcement for a situation.

Watch the whole clip to hear members of the public discuss the theater program and candidates who are vying for the Board of Ed election seats April 20th. 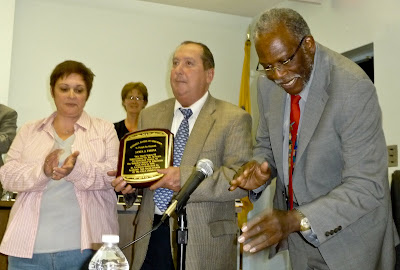 Interim superintendent Carter joined by Board President Rose Marie Markle in presenting Jimmy Farina an award for his 36 years of service on the Hoboken Board of Education.  Last night's meeting was his final one as a BoE member.
There was sincere enthusiasm in the applause and much reflection on his efforts.  As Jimmy himself said, longer than he thought going back to the days of President Richard Nixon.  He denied any role in Watergate to much laughter.
BoE member Carrie Gilliard was also presented an award for her nine years and three terms of service.
Posted by SmartyJones at Wednesday, April 14, 2010
After 36 years of BoE service, Jimmy Farina earns award
2010-04-14T08:21:00-04:00
SmartyJones
36 years of service to Hoboken|BoE member Jimmy Farina|
Comments

This clip details the discussion of BoE members regarding interim superintendent Carter and the Business Administrator Bob Davis.  Their contracts were renewed in a 7-1 vote.  Some important points noted in this discussion concerning waste, streamlining of functions, elimination of positions and substantial savings to the BoE and Hoboken.  Both of these men have played critical roles in the day to day efforts to identify and fix a multitude of problems at the BoE.

Board member Maureen Sullivan was the dissenting vote against the contracts retaining the interim superintendent Carter and the BA Robert Davis. The discussion begins with some public comments before the Board members take up the matter.  Listen carefully to the superlatives mentioned in the work of both these men.  It's hardly overstated.