How Sweep it is! Kids First Sweep!!!! Budget Passes!

These numbers are final short of approximately 60-70 provisionals.


Talking Ed Note: Apologies if the numbers may be off a few here or there, worked off a difficult phone connection.


A midnight update says we have a tie for third.  This will be revisited tomorrow.

There's been word of some problems with machines in a few locations and provisional ballots were used as a result.  Provisional ballots are counted only at the end of an official count when required in a close election.

Some reported figures on absentee ballots in the 400 range.  This exceed last year's totals when a strong turnout election yielded in the 300+ range.  Frank Raia although not on the ballot is thought by some to have an operation behind these unusually high totals.

In addition, some reports stated there were candidate advocates inside polling stations in a section of town and this activity was by supporters of John Madigan.  This is a flagrant violation of election law.  No word on any action as a result.

There is about three hours left in the important Board of Education race before polls close.
About a third of the local tax bill falls under the BoE. 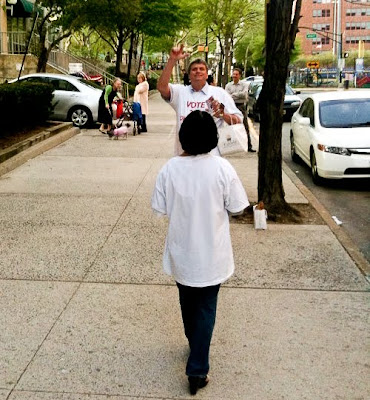 Here's a photo of John Madigan earlier today in the area of Marine View.  He's standing within the 100 feet of the voting station that is behind the silver car rear left.

When asked by a polling worker to leave the area he became verbally abusive yelling, "Get a effing tape measure."  To another person who asked him to do likewise he replied, "You effin worm."

Electioneering outside a polling station is a violation of election law.

Cammarano - Guilty of Extortion and Conspiracy

Claire Moses at Patch.com reported on the scene of the Cammarano appearance in Federal Court today.  Sentencing for his crimes pleading guilty to extortion and conspiracy will likely fall somewhere between 24 and 30 months according to a recommendation from US Attorney Paul Fishman's office.

Sentencing will be in August. Here's a video of how it went down last summer at the City Hall protest. Even passing rainstorms didn't temper the crowds.

Today is election day for the Board of Education in Hoboken.  The sun is looking brighter already.  Word on the street is Peter Cammarano had earlier voted by absentee ballot.  We're waiting to see if an unhinged BoE member will claim to have received an endorsement.

You won't believe what's occurred over on Hoboken Revolt.  The wheels have fallen off and even little old ladies aren't safe on election day.  This may take the cake of worst election stunt ever seen in town.  But this one is absolutely ghastly.

Election Day Guests of the Stable

It's election day in Hoboken for the school board race.  Some late submissions have arrived and accordingly we'll give them the Guest of the Stable treatment.  The first is from Greg Lincoln, the next Hoboken friend Dean Kemph, and last Councilman Ravi Bhalla.  The only message MSV endorses today though is get out and vote. 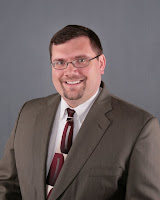 On Tuesday is an important election for the Hoboken Board of Education. I would like to ask you to do three small things that will not take a lot of your time:

1) Make some time to vote on Tuesday. The polls are open from 2 pm until 9 pm.
2) Pass this message along to any/all of your Hoboken friends and neighbors.
3) Do a little research to help yourself make an informed decision.

My intent here is not to write at length to persuade, but to offer some information that may help with your decision.

Here is a questionnaire many of the candidates responded to.
Here is the website of the slate I favor, Kids First.
Here is a letter to the editor I wrote to the Hudson Reporter.

My own personal belief is this: that Kids First has shown they can cut the budget in ways that are sensible and responsible (over $4.1 million last year), and that they are in the best position to continue doing quality work on the behalf of both the students and the taxpayers of Hoboken.