Tonight's City Council meeting will be anti-climatic after the Kids First sweep last night unless you can grandstand on the credentials of a potential Business Administrator this town absolutely must have before regaining its sovereignty from the State.

Not much excitement on the resolutions list other than that item.  You can find the agenda here. Details of the resolutions including Arch Liston's resume are available here. Review his resume if for no other reason than to understand why the inside word is he stood heads and tails above the other candidates.

You can probably catch the portion on the Business Administrator candidate Arch Liston and then the 9:00 pm showing of The Cartel at the Clearview uptown.


For those who wish to watch at home, tune in at 7:00 and join in the live censor free chat.
Hoboken411 will hate you and your free speech here but it's all angry losers there anyway.
MSV hears its sour grapes time over there again after an election.  What else is new?

Tonight in Hoboken: one night only - "The Cartel"

Folks are still buzzing over the huge Kids First victory and there's a big finale to the election with the movie on corruption in education in New Jersey being featured here in Hoboken at the Clearview.

Yes, there's a City Council meeting but no biggie and you can catch it on replay.  Do yourself and your town a favor and invite a couple of folks to the new theater tonight!

Bob Bowdon, the Director of the film was interviewed by Hoboken.patch.com.

Showtimes not available for online purchase are in grey
example: 11:30am

Not all ticket types are available for all performances.

It is (still) a Kids First Sweep!

Here are the final verified totals for the elections (including absentees not provisionals):

For the one year seat:

The vote totals are almost exactly the same as the previous year election in the range of 4900 meaning the people engaged on the Board of Education continue to be engaged.
Provisional ballots will be added end of the week on Friday.

Absentee ballots did not prove to be the difference in this election.

Our friend the Jolly Green Giant has weighed in on the Kids First win at The Hoboken Journal.  He also has video up.  Nice to see the big guy last night. 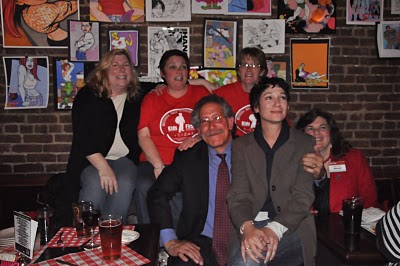 Shot of the night: Kids First celebrates the moment of victory at Maxwell's last night.  The mood of the event was nothing short of ecstatic.  Hoboken has historically seen reform crushed when there have been divisions allowing the old machine to take control.  A shocking result in the across the board sweep of four seats in less than ideal circumstances.

Houston we have problem

One seat up in the air now.  A review of third place will have to be conducted.
There are questions though as these numbers are lower than the late tally last night.

With the machine and vote-by-mail ballots tallied the race for the third seat on the Hoboken school board appeared to be dead-even between incumbent Rose Marie Markle and newcomer John Madigan.

This race is probably heading for a recount or could be determined by provisional or emergency ballots used at the polls. All else fails, there could be a runoff.