Here's a series of photos from last night's BoE swearing in ceremony.
Hit the big play button once to let it run auto or then hit right or left
on the screen or similar buttons on your keyboard to control.

The photos start near the end of the meeting. Enjoy!

The Education Revolt will not be televised....

Better late than never.  Here's the details on the educational protest in Trenton tomorrow:

The 2010 New Jersey Education Reform Rally will be tomorrow, Thursday, April 29, 6pm in Trenton, NJ.  (A screening of The Cartel will occur immediately afterward at 7:30pm.)

The other side has their paid cronies... now it's our turn.  Tell them: Enough is Enough.

If you believe that New Jersey needs Education Reform now -- come to Trenton's State House Annex tomorrow, Thursday, at 6pm -- and tell your friends & neighbors about it.

(No children will be pulled out of classrooms for this event.)

Tickets for the 7:30pm screening of The Cartel at the State Museum Auditorium, available here:
http://www.thecartelmovie.com/cgi-local/content.cgi?g=22#njswing

Last night's ceremony, usually a rather placid affair was charged due to the sweep of all four seats by Kids First and a rather funny moment involving Mayor Zimmer. 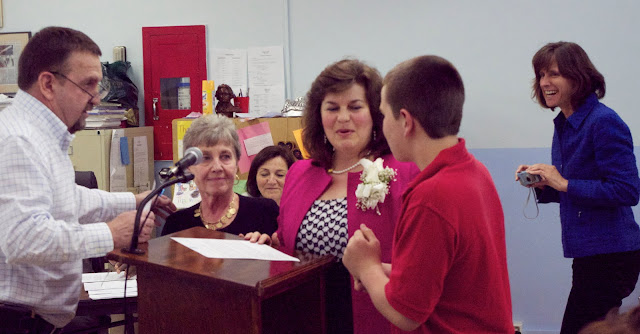 Jean Marie Mitchell is sworn in for the one year term (center) as Mayor Dawn Zimmer approaches to take a photo.  The new BoE member's mother, out of town for the event had asked the mayor to take the picture of the family handing over her camera not knowing she is the mayor.  Board Secretary David Anthony, (left) conducted the ceremonies. 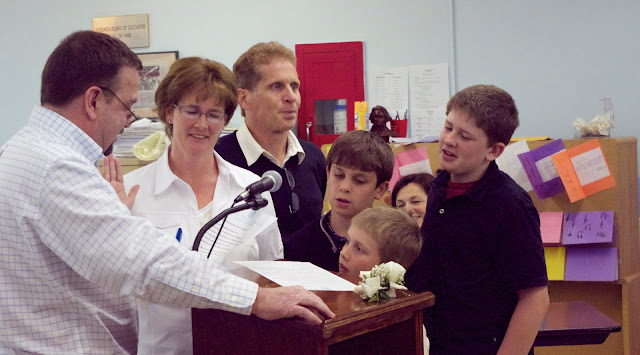 Irene Sobolov takes the oath of office with her family looking on.  She was the top vote getter in the BoE election and now begins a three year term. 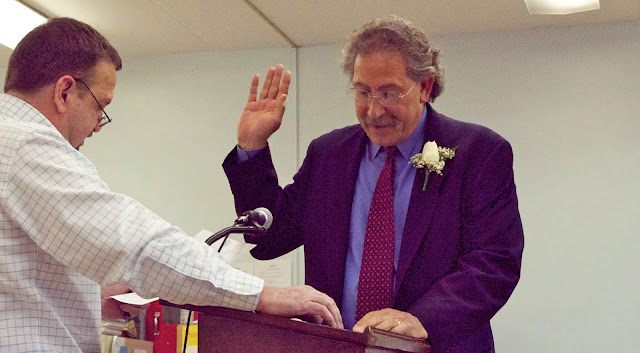 Leon Gold, a long time active member on the Hoboken scene at many important civic meetings and a former member of the Hoboken Revolt steering committee now finds himself on the other side of the government table.  He's not only a new member on the BoE, he's also the first man to hold that role as a member of Kids First and a three year term. 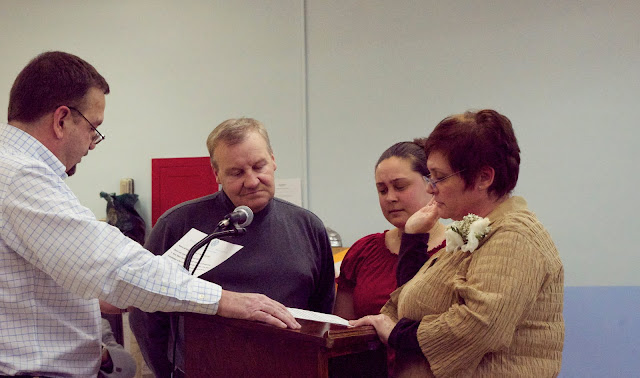 Rose Marie Markle is sworn in for another three year term.  She is joined by her family and minutes later was given a ringing endorsement from her colleagues to remain Board President for another year.  The crowd gave her a standing ovation.

Mayor Zimmer taking pictures on behalf of the Mitchell family.  She could not contain her fun and no doubt the irony in the moment not lost on Board member Carmelo Garcia seen smiling on the left.

Our neighboring blog, the Hoboken Journal attended last night's BoE meeting and filmed the proceedings.  The complete segments of all the new BoE members is now up and available for viewing.

Please take a look to capture the spirit and intimacy of the proceedings.  It certainly is a marker for Hoboken.  These "ordinary" Hoboken moms of Kids First (including Dr. Leon Gold) now hold six of the nine seats.  The challenges they face considering both the town's and State's economic climate are steep.  MSV wishes to extend to them congratulations and good luck in serving the town and its children well.

MSV will have some photos and maybe video later.