Tonight item #1 on the agenda is the big prize.  Hoboken having approved a Business Administrator is within an eyelash of meeting the State requirement to regain control over its fiscal future.  Here's the resolution pack: agenda here and resolutions here.

As usual, you can wash that down with censor free chat.  It only takes a minute to set up.

HR breaking: We can prove that checks made out to 'cash' are clerical error

The Hudson Reporter minutes ago posted an update to their initial story relaying a statement from a Beth Mason spokesman on the dozens of checks listed as "cash" in her ELEC report.

"We can prove that checks made out to 'cash' are clerical error" is the updated headline and the story relays the claim an accounting firm was behind this mistake even though the final report showing 48 instances of checks made out to "cash" is clearly visible in the general ledger even with a scant review by anyone without any accounting experience!


The Hudson Reporter posted this answer received on how such an "error" could occur:


“We were very surprised to see all those notations saying cash. We have called the accounting firm that prepared the report. They are equally surprised. We don’t know if this was some kind of a mechanical error in the software, or if it was a human error, but they’re accepting responsibility for it and they’re preparing corrected forms for us.”


As to the question of how single checks can not only be mislabeled in "error" by the dozens made out to "cash" and simultaneously be accrued to MULTIPLE PEOPLE almost THREE DOZEN TIMES in the same general ledger remains completely baffling.


Below are actual copies from the pages showing anywhere from two, three, four, five even six individuals all credited with the same "cash" check.


For the ELEC entries to meet legal requirements each INDIVIDUAL must show a check made out to them by their respective name! 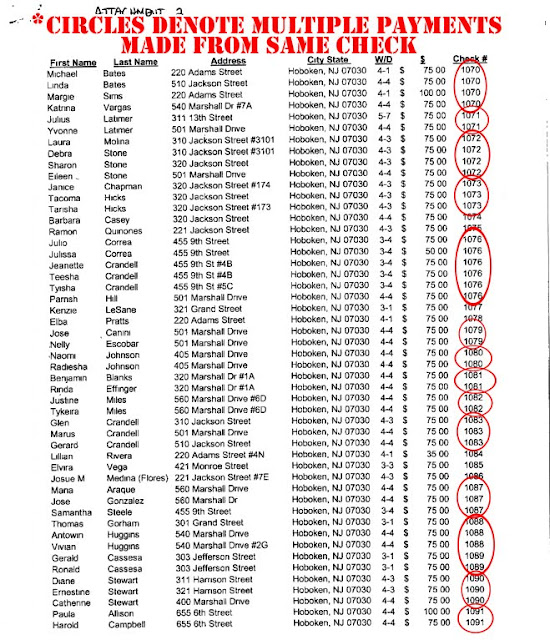 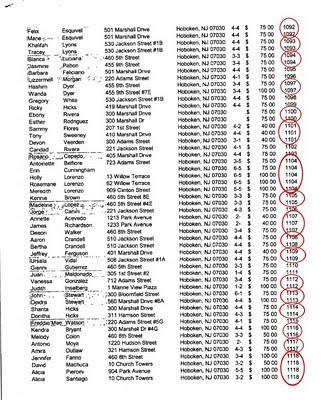 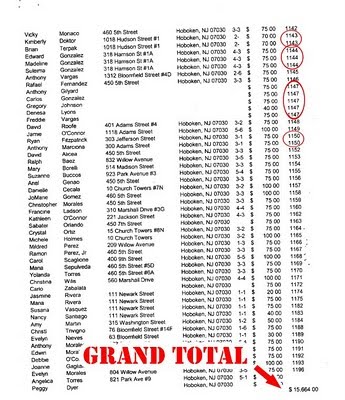 Talking Ed Note: MSV will be following up to find out what kind of accounting protocols were applied to create such "errors" too.  We've never heard of any software package that has those kind of magical powers.  If it exists we want a copy from the accountant.


Based on the initial comments, this snow job in May isn't going over very well.  Folks have already indicated exactly what the evidence posted here reveals.  How is this going to possibly turn out?  Expect more finger pointing and and possibly an Al Capone type accounting outcome.

Posted by SmartyJones at Wednesday, May 05, 2010
HR breaking: We can prove that checks made out to 'cash' are clerical error
2010-05-05T17:39:00-04:00
SmartyJones
Beth Mason ELEC violations|magical accounting software|magical checks to multiple people|
Comments

According to a story posted online by the Hudson Reporter, Councilwoman Beth Mason claims via a spokesman dozens of checks listed as "cash" on her ELEC report are merely "clerical errors." Her statement then goes on to attack Councilman Ravi Bhalla on his failure to file a BE form as part of ELEC and appears to reignite her charges of the "most blatant conflict" regarding the earlier Condon contract. That report was posted in its entirety here on MSV earlier this week.

Here is the statement issued on behalf of Beth Mason:

Yesterday, Councilman Ravi Bhalla accused me of committing criminal offenses and “felonies.” These outrageous accusations are totally false and nothing more than vicious lies told by Bhalla to deflect attention from his own illegal actions.

No one was paid in cash. Not one penny.

Every campaign worker was paid through a check issued by the campaign.

Every check was reported on our team’s ELEC reports.

No checks were written made payable to “cash.” (emphasis MSV)

It is true that our ELEC reports mistakenly identified some checks that were paid to campaign workers as being written to “cash.” This was a clerical error made by the person completing the report, and the report will be amended.

He admits that he repeatedly broke state law by failing to disclose that his law firm received hundreds of thousands of dollars in public contracts – and that he also failed to disclose thousands of dollars in political contributions he made that were related to those contracts. That’s called “pay-to-play” and Bhalla is a big time player in this corrosive system. Yet he masquerades as a reformer.

For three years in a row, Bhalla failed to comply with this fundamental pay-to-play reform law. When a reporter from the Jersey Journal called him on Friday, Bhalla first said that the law didn’t apply to him. Then he changed his story and said that he was unaware of the law. Bhalla said he never heard of it!

How can anyone believe Bhalla is telling the truth? How could he be unaware of this basic fundamental reform law that is so widely publicized? How can an attorney with so many public contracts who is also an elected official possibly be so incompetent?

This is just the latest in a series of ethical problems and conflict of interest charges that have surfaced in recent weeks. Whenever Ravi Bhalla makes any accusations against anyone, people should, “consider the source.”

Councilman Bhalla via email replied "Enough is enough. More name-calling and a continued back and forth on this topic does not advance any public interest. There are plenty of important issues
confronting Hoboken. I look forward to working with Councilwoman Mason on
the many challenges facing Hoboken in the coming months and years."


Talking Ed Note: Okay, as they say "show me the money" so let's see the dozens of checks and corresponding check numbers with the entries of naming "workers" not made out to cash. There's no additional comment from the Hudson Reporter that any request for transparency has been made or will be forthcoming to demonstrate this "clerical error" on dozens of checks.


Why would the Hudson Reporter rush out a statement without that answer for its readers?


Are we going to see the Mason political operatives online (and their many screen names) to now support this new claim or do we get to see the checks?

While we're on the subject of ELEC reports,  Da Horsey is going to guess many folks have had enough of that chatter, but there's yet another update landing courtesy of the Wile E. Coyote himself, Eric Kurta who surfaced for just this special occasion.

According to the assembled chart below, it appears Councilwoman Mason's has not completed the filing for an ELEC report from her joint candidates committee in the mayoral run last spring.  That last ELEC entry was in September 2009.

A question arose in the Bhalla press conference earlier yesterday whether "street money" also found its way in Mason's November mayoral campaign into envelopes filled with green or similarly (and equally) via checks made out to "cash."  After reviewing page after page of "campaign" workers being paid $50 in Beth Mason's 164 page candidate report, and others including Church Towers residents getting $75 to $100, it's clear this is in fact NOT the case.

But now there's a far larger question looming concerning all these paid people listed on her campaign.  Does anyone recall seeing any of these names out working for Beth Mason on election day last November?  Most reports MSV received indicated the workers on the streets for Beth Mason consisted almost entirely of out of town paid workers.

Looking around the local Hoboken internet sites since late yesterday shows a sudden dearth of pro Masonite comments.  Either they decided to retreat in mass in a spontaneous showing of instant butterfly migration or they were given the word to head for the hills.

Will the local media drop the ball on this story now?  What do you think? 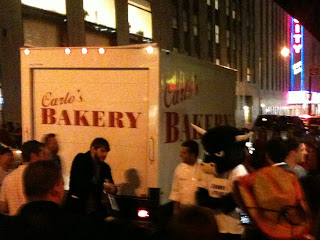 The Cake Boss is attracting crowds aside from the usual ones in front of his bake shop in Hoboken. In Manhattan Friday night a small crowd gathered around the Carlo's Bakery truck at the western themed watering hole, Johnny Utah's. People were there to watch the Cake Boss, Buddy Valastro, deliver one of his famous cakes. These deliveries serve to cap each episode of the TLC show "Cake Boss."

The crowd encroached to see the filming and apparently some of the fame is rubbing off on our the town, a little girl was heard correcting her Mother's pronunciation of Hoboken.  For about fifteen minutes not much seemed to be happening. Buddy took a few pictures with the crowd and the bar's mascot bull until someone from the show starting shooing them away. At that point a group appeared leading a blindfolded woman into the restaurant, the intended recipient of the cake.

Finally the back of the truck opened up to reveal a mechanical bull cake, complete with rocking action. After a few false starts they were able to get the bull inside and we should be able to see the completed delivery in a few months when the episode airs. 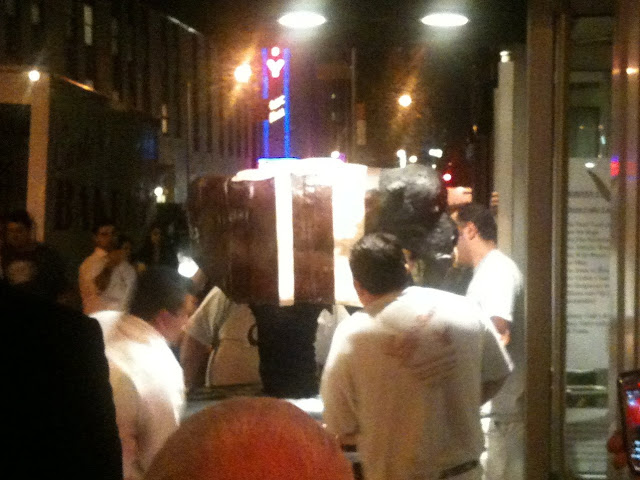