In the burgeoning story of ELEC violations, Councilwoman Beth Mason continues to insist on her innocence but the assessment of ELEC violations is all but concluded based on limited revelations of check activity.

Yesterday afternoon, the Jersey Journal posted their story including a comment from the determinative party - ELEC - and it was a straightforward conclusion:

But ELEC officials said today that the Team Mason for One Hoboken report is still in violation of ELEC rules since each worker was not given a check from the campaign account. A spokesman for Mason said that in some cases a number of family members worked on the campaign and one check was issued for all of them.

In a follow-up story filed by Andrew Tavani for Hoboken.patch.com, Councilwoman Mason ignored the stated violations from the state agency holding jurisprudence on the matter saying:

"We haven't done anything wrong," Mason said in a phone interview this afternoon, noting that she has all 48 checks in question that were issued to individuals. "This is just a smokescreen. Before you make an allegation of a felony offense," Mason said of the campaign finance misconduct allegations, "you better make sure you check your facts."


The facts of the Mason One campaign are now well established.  Initially 48 checks were flagged as potential violations in a Tuesday morning press conference by Councilman Ravi Bhalla who Mason insisted should resign his council seat for ethical and ELEC filing problems.  Councilman Bhalla then stated there were potentially far greater grievous errors in Councilwoman Mason's ELEC filings - all certified by her and her campaign.  Those documented violations are now exposed in multiple repeated violations based on ELEC rules governing how campaigns issue checks to individuals in "street money."


In addition, the claims of one check going to "a family" does not stand up to any level of scrutiny.  Of the almost three dozen instances noted in a story just yesterday (highlighted with red circles showing numerous parties paid on one check) even a cursory review shows "family" individuals at MULTIPLE ADDRESSES.


The first check on the attachment of names, check no. 1070 for $300 detailing this ELEC violation was paid to a Margie Sims of 220 Adams Street.  Monies from that check were then distributed to other people at OTHER ADDRESSES.  In this very first check listed, there are in fact three different addresses in total.  The two additional addresses listed are 510 Jackson Street and 540 Marshall Drive.


The same "family" distributions of money being illegally distributed among different addresses is clearly determined by numerous other checks, all similar ELEC violations.

As illustrated above, are the Correa, Crandell and Hill's all related and part of the same family?  Julio Correa lives in 5G at 455 9th, while Jeanette Crandell lives in 4B of the same building.  These people are all "family" according to Beth Mason?


Here's more Crandell's, but they are paid on a different check.  Ironically two here match the same 501 Marshall Drive address while another is at a different address.  These "family" street money distributions sure are confusing.

Here we have three different last names (sorry for the resolution) at yet more multiple addresses scattered across town.

In this illustration above there's five different people with five different names and no addresses all paid from one check.  Are these people all part of the same "family" too?  Do they even reside in the same address?  Well you can't answer that question as there is no addresses given - FOR ANY OF THEM.


Larger questions surrounding these payments from the Beth Mason campaign to multiple people at multiple addresses are outstanding and Councilwoman Mason has yet to offer any reasonable rationale for them.  The number of ELEC violations would be concluded by the state officials and/or investigators who will have to review the numerous instances where checks were issued to one individual and distributed elsewhere.


The distribution of "street money" whether by cash, checks made out to "cash" or distributed by multiple people to others are all ELEC violations. 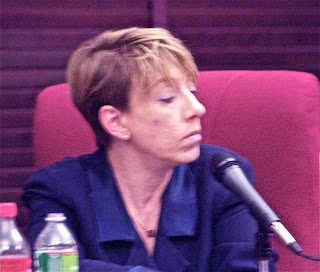 Councilwoman Beth Mason in City Council last night
Do the violations and the story end here?


Talking Ed Note: An email to Councilwoman Mason for comment on these outstanding issues was sent after this story posted.  An earlier email did not receive any reply.  MSV will update and post if a statement comes in its entirety.