The Council of No

The City Council meeting was not broadcast live for the special meeting Monday, however a source onsite indicated the "Council of No" was present and accounted for so if you were looking forward to a drinking game of how many times the words "Dave Roberts" would be trotted out in grandstanding fashion, then your liver will thank you.

Claire Moses from Hoboken.patch.com is currently onsite and will be your best source for first hand reporting.  If you want a package of garbage and lies fed to you, then Hoboken411 is your best choice. 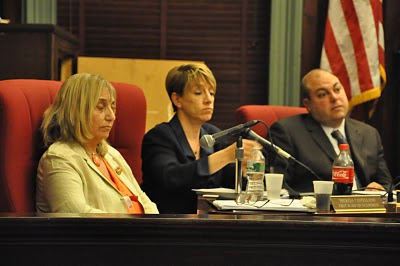 Hoboken's "Council of No" as coined by the Bard of Hoboken
courtesy of the Hoboken Journal
Update: Claire Moses twitter noted the line item move passed 6-3.  Okay, the odds are below betting level but no doubt the three no votes will be "no" surprise.
Related: Claire Moses of Hoboken.patch.com attended and just posted a story detailing the events leading into the vote last evening.  She captures the substance of it, and features quotes getting to the heart of the matter by former Finance Director Nick Trasente, Councilman Michael Lenz and also Councilwoman Carol Marsh who concluded with a quotable remark to the reactionary "Council of No" - "Apples, oranges, kumquats and zebras - let's vote."
Wednesday Mayor Dawn Zimmer is scheduled to go to Trenton to present Hoboken's credentials for sovereignty and completing the term of the fiscal state monitor.  Hoboken voters should keep in mind who worked to bring this moment to fruition and those who only worked for their own destructive political ends at the town's expense.
.
Posted by SmartyJones at Monday, May 10, 2010
The Council of No
2010-05-10T19:34:00-04:00
SmartyJones
Hoboken City Council Special Meeting|the Council of No|
Comments

For those who just can't get enough, here's the background on tonight's special City Council meeting tonight @ 7:00.  Some readers have noted previously these meetings have been less well attended by certain Council members.  MSV knows one Council person who is all but certain to not be attending.  Can you guess which?

Councilwoman Beth Mason will be hosting a fundraiser tonight in her Hudson St. home for NJ Senator Bob Menendez - this coming not long after the Mason family donated $5,700 to the Real Results Maureen First slate in the Board of Education election.  That donation made the Councilwoman's family one of the largest donors to the Real Results Republicans according to the most recent ELEC reports.  Senator Menendez is a prominent national Democrat.

Speaking of the "E" word again, the Hudson Reporter's story over the weekend stated Councilwoman Mason would "look into who in her campaign" made cash payments to individuals not named on checks as required by state law.

MSV mentioned last week a rumor a new Mason defense might claim the campaign ran "out of checks."  It's unclear now what new direction Councilwoman Mason will go.  The reasons for these activities have changed daily since Councilman Ravi Bhalla raised the question on her ELEC report from last spring's mayoral race. (Scroll down this page and the next for the complete story on the emerging Mason ELEC violations.)

Tonight's City Council meeting will be available online until the closed session portion.