Perry Belfiore a long time participant in local politics in Hoboken has entered the never say die battle regarding the Condon contract passed by the City Council earlier this year in a 9-0 vote.  His complaint available in its entirety below is part of the theatrical sideshow manufactured by Councilwoman Mason and the purple pillow fluffers of her government-in-exile campaign.  (The Hudson Reporter story never detailed its origins last weekend.)

The complaint filed was originally expected to come from another party who made noises about filing at the last City Council meeting: Patricia Waiters - the perennial Hoboken candidate for any office who sees as many conspiracies in her election defeats as some other diehards who can't accept election outcomes.  Is Perry Belfiore among them? 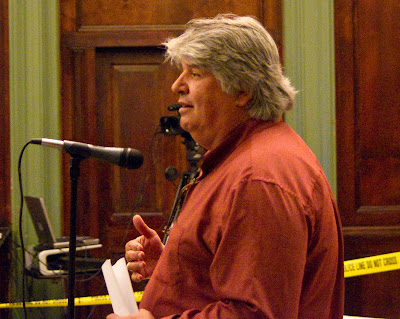 Perry Belfiore at the last City Council meeting - the jovial loyal opposition
Perry's political history in Hoboken goes back over decades and many consider him a real solider of "Old Hoboken" or the old Hoboken type of governance many would prefer go away, as in forever.  Although the Condon contract, a relatively paltry amount in both the scale of contracts and the Hoboken budget has been analyzed every which way from Sunday, no one has come up with a legitimate justification to make any ethics allegations against Councilman Ravi Bhalla stick.  The "exclusive" posted by Hoboken411 has turned out to be nothing more than another Beth Mason hatchet job manufactured and ghostwritten by her minions who are bitter at the Hoboken electorate for not making Councilwoman Mason mayor, bearing them power and patronage jobs in the process.  As many know, Councilman Ravi Bhalla approached Corporation Counsel Kates to review his vote on the matter BEFORE he voted.  This is what one would typically call in Hoboken progress.
Now Da Horsey has a soft spot for Mr. Belfiore.  Not only do we find his opposition somewhat jovial in comparison to the bitterness and worse from others, it's frankly often entertaining in the way one can reasonably expect a loyal opposition to stand as the minority against all things majority.  (Does it need to be 100% against?  Well no but that's how it goes here of late.)  The complaint filed is more of a shot in the dark to get one last dig against Councilman Ravi Bhalla in a political operation that should have died a long time ago.  As the saying goes, the definition of insanity is repeating the same failed methods over and over again.  Is anyone home?
Why is MSV so dismissive?  Well take a look at Corporation Counsel Kates' analysis in his report on the Condon matter.  As we remarked to a Board Member of People for Open Government the other day, if you think there's a lawyer out there who can refute and prove Mr. Kates' findings incorrect, good luck.  This is a lawyer with a superb background on BOTH municipal and ethics law.  The attacks and swipes at him have been particularly ignorant and malicious.  To those who wish to bark up this tree, MSV says happy hunting.
The real issue for ethical examination isn't this politically motivated drivel but the the municipal contracts Councilman Bhalla has obtained in Newark and Union City.  A comprehensive feature on this is underway and will be posted on MSV soon.

Talking Ed Note: Full disclosure as MSV often speaks to many members of government and folks on the scene, there's been many occasions for amenable chats with Mr. Belfiore.  He's always been a gentleman and even thanked Da Horsey for a critique supporting his son serving as a substitute teacher that was part of one our our many exposes of the hatchet jobs by the uptown smear merchant at Hoboken411.  At the last City Council meeting, Perry extended an invitation to get together and chat over a drink and it was accepted although we've yet to do so.  If he's buying, Da Horsey is still in.

Although MSV doesn't share Mr. Belfiore's assessment in his complaint on the Condon issue, he's someone you can have a reasonable discussion.  It's notable to also reflect on some of Mr. Belfiore's greatest hits, and here's one gem before he got behind the latest old guard never say die candidacy of Councilwoman Beth Mason:

"Right now, a dream has been put on hold.  I truly hope and pray that Peter didn't do anything for which he'll have to resign and abandon the dreams he had for Hoboken."

Perry Belfiore speaking after the arrest of ex-mayor Peter Cammarano.

Mr. Belfiore supported Cammarano and most recently has moved on to support Councilwoman Mason in her quest for the mayor's office last November.  He's recently served as a Hoboken Housing Authority Commissioner and is currently a member of the Hoboken Planning Board to the end of 2010.
Perry had earlier sought but was not selected by the City Council last fall to serve another term in the HHA.
Related: The report by Corporation Counsel Kates is available here.
If you haven't read it at least take a look at the conclusion.