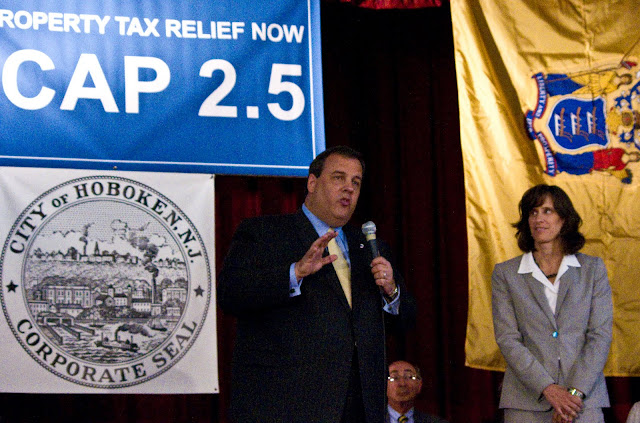 
Talking Ed Note: The kickoff around New Jersey in this discussion is officially underway.  The battle lines are clear and the usual voices on different sides will be heard, in fact an advertising campaign to stop all of these proposals is being broadcast on the airwaves.  But will it work?  All of this remains unclear.

For now, MSV can note the new paradigm of forces at work.  Unifying beyond party lines to tackle the reality of a $11 billion deficit in a state with a budget less than three times that should give everyone pause.  It hasn't. As an example of this, see the discussion in part two of the video below between Gov. Christie and Councilwoman Beth Mason.   At the 27:00 minute mark it all unfolds.  You can click on the scroll ahead to find the start point.

What is also clear is Mayor Zimmer is going beyond partisan politics and recognizes her efforts locally are directly tied to the effectiveness of the Governor in these proposals.  Ironically, this town hall meeting occurs on the very first business day after state fiscal control.  The mayor clearly recognizes this is a necessity not an option.  MSV will try to get some Q&A time to ask some related questions as reader InfotainMe suggested.

Let's leave the reader to evaluate the objective information available for the moment.  It's all there on video and now here in the legislation you can download too.

Related: Andrew Tavani has posted his excellent story on the event now.

Mayor Zimmer Welcomes Governor Christie to Hoboken For Town Hall Meeting
"Nothing partisan" about fiscal responsibility
HOBOKEN, NJ -- Mayor Dawn Zimmer welcomed Governor Chris Christie to Hoboken Monday morning for his first town hall meeting to discuss a set of proposals to control property taxes in New Jersey.
Speaking before 125 residents at the Hoboken Catholic Academy, Mayor Zimmer outlined Hoboken's fiscally questionable past and drew parallels between New Jersey's and Hoboken's fiscal troubles:
"We have followed the same fiscally shortsighted practices that administrations of both parties have followed at the state level. We have spent more than we could afford, and plugged our deficits with one-shot gimmicks and by borrowing from our future."
The 33-bill package proposed by Governor Christie includes a constitutional amendment to impose a 2.5% cap on increases in the property tax levy and state spending as well as a series of measures to reduce costs at the municipal, school and higher education levels.
"This is not a Republican or a Democratic issue," added Zimmer. "There’s nothing partisan about being smart and responsible with the money entrusted to us by our citizens."
Emphasizing the need for a series of tools to help Hoboken control its costs in the face of reduced state aid, Mayor Zimmer urged the New Jersey legislature to pass the municipal "toolkit" proposed by Governor Christie. Her full remarks as prepared for delivery are below.
Read more »
Posted by SmartyJones at Monday, May 17, 2010
Mayor welcomes the Governor
2010-05-17T14:40:00-04:00
SmartyJones
Mayor's Toolkit|
Comments


This section has a very interesting exchange during the Q&A section with Councilwoman Beth Mason at the 2700-28:00 minute mark on transportation and charity care funds to hospitals.  Gov. Christie details how funds were reduced in many areas around the state including for transportation but not for charity care that saw a $62 million increase.  He also mentions that the State of NJ was close to not making payroll for state employees without these cuts in the first week of March.  Reality check anyone?


This town hall meeting on statewide municipal reforms in Hoboken was carried live without the use of even wifi.  A wifi connection would provide much improved video but none was available.  Although there are some choppy points, the audio is almost completely clear throughout.  This is yet another Mile Square View exclusive as it doesn't look like anyone else broadcast the event live anywhere else!

About 100 members from various Hoboken local groups were in attendance.

Mayor Zimmer indicated at the end of the presentation the legislation would be posted on the city website.  Not clear when but it will be probably sometime this week.

This feed is also now available at the Hoboken Journal and by written request.
All rights reserved.

The Hoboken Journal - Emergency Services at the ready

The Hoboken Journal features a unique tool at hand for the local news junkie or the very curious on the emergency happenings around town.  The feed from RadioReference.com gives you the dispatch traffic of Hoboken's Police, Fire and EMS among others.

The live link is featured on the top right of the page.  Check it out.