MSV received this official release:
MUNICIPAL GARAGE UPDATE FROM THE MAYOR’S OFFICE
There have been erroneous reports distributed throughout the community regarding the status of potential sites for a public works garage.
Here are the facts:
There are ongoing negotiations, and we are reviewing all options. No decisions have been made, and all options are on the table. The City is under no contract to acquire properties.
Request for Proposals were issued on Monday, May 17 seeking bids for temporary space for a garage and parking. Responses to the RFPs are required within 10 calendar days and due by Friday, May 28th at 4:00 pm.
The public will be apprised of those responses at an upcoming City Council meeting which will be publicly advertised through the local press and on the City’s web site.  The public is encouraged to comment on those responses when they have been received.
The Administration, in coordination with City Council President Peter Cunningham, agreed to postpone a vote on a bond ordinance for the temporary structure of the garage facility until the RFP responses have been reviewed.  This means that neither the bond ordinance related to the garage nor the garage itself will be discussed at this week’s Council meeting unless it is brought up at the public portion at the conclusion of the meeting.
Planning and preparation for the set up of a temporary site have been ongoing, along with clean up and organizing in preparation for an upcoming move from the current site on Observer Highway.
Once a final decision is made on the new location, with input from the public, then the City will be well positioned to move the municipal garage site to a temporary location.

Related: A reader emailed that Hoboken411 is in full out chaos mode trying to raise up a ruckus on this issue where nothing is definite.  The uptown smear merchant has even gone as far as embracing Councilman Mike Russo.

A reader emailed that Hoboken411 found a way to edit the video of yesterday's event to fit his "editorial" bias.  Most of his video content is actually of people outside, including the old pro-Cammarano umbrella faction that has now apparently adopted Councilwoman Mason.  Today's earlier exclusive was posted before knowledge about Hobo411's director "cut." That's what we'd call irony.
People have taken notice of the strange positions Hoboken411 takes.  For example, he frequently holds Glen Beck up as someone worth viewing, but at the same time he is a ruthless censor and bans people who don't follow the party line on the website.  He supported the Real Results Republicans but now he is standing with the protestors against Gov. Chris Christie's proposals although he doesn't actually show much content on what the Governor discussed.  In fact the content he's most interested in posting reveals certain voices he finds himself aligned. They can be seen in the most recent City Council meeting on something they ardently agree: 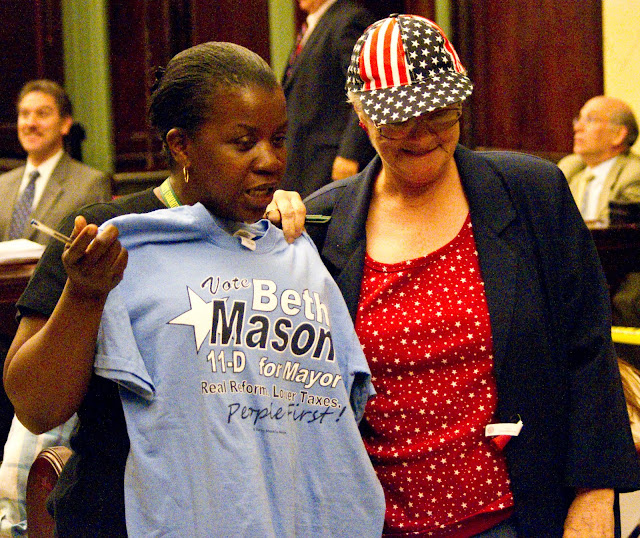 A Beth Mason for Mayor t-shirt makes its appearance at the last City Council meeting
(Note the slogan "Real Reform Lower Taxes")
Apparently it's upsetting enough that Gov. Christie and Mayor Zimmer have gone beyond partisan lines to work together against the almost dozen billion dollar deficit the state faces.  Hoboken of course along with other municipalities can hardly expect stable let alone greater funding from the state under the circumstances.  It must be driving the poor guy insane.  Anyone who saw him yesterday would know why.
The more things change, the more they stay the same.

The invite list: the breakdown on the invitations according to the mayor's office were as follows:  Republicans got 20, Democrats got 20, other community groups got 10, others that requested to attend in advance of the event were added to the list for a total of 130 not including a list from the Governor's office.

This should dispel some of the misinformation spread (already) on the attendees yesterday.

The protest against Gov. Christie

Anticipating a protest at yesterday's town hall meeting in Hoboken, some barriers were set up across the street.  About thirty minutes before the event began, MSV went out and took a few pictures.  Local resident Margaret O'Brien recognized Da Horsey and called out but for what reason is unclear.  She got a friendly wave back before MSV went in to set up and broadcast the event live in its entirety (see video below). 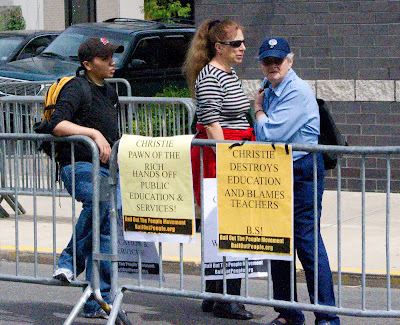 Resident Margaret O'Brien was joined by four other protestors.
These astroturf signs are sponsored by a group called bailoutpeople.org. 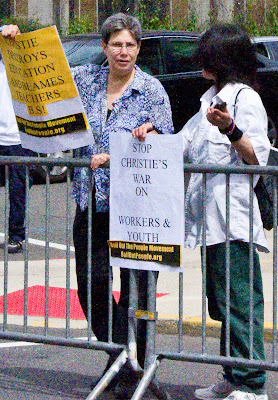 The two other protestors.
Who exactly is this group on the signs?
A quick search online shows the website as a left wing organization.  Further research on that website shows a central organizing member, LeilLani Dowell also a founding member of a group called F.I.S.T. - Fight Imperialism Stand Together.  The group features a picture of mass murderer Che Guevara on its website and supports a platform of amnesty for illegal aliens, standing against Israel and the US, and offers a primer "What is Marxism all about?" also defining Leninism.  Yes, that Lenin - the same guy who overthrew the Russian tsar and helped institute communism where tens of millions of people in the gulag known as the Soviet Union were killed over decades. 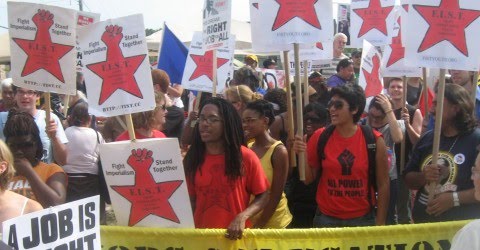 Photo from the FIST page
There's no linkage suggested in the actual individual protestors at the event yesterday and the organization(s) behind the signs.  It's historically common for communist groups to take the initiative in these type of protests and then infiltrate other groups such as labor who are expressing opposition from its members.

And of course it's fine for people to disagree and protest on the complex issues in the detailed legislation put forward.  It is however a story no one else has written.