There goes the free parking

The City of Hoboken announces:

INTERNAL AUDIT ASSISTS IN CATCHING ILLEGAL USE OF PARKING TRANSPONDERS
In October 2009, Mayor Zimmer directed Transportation and Parking Director Ian Sacs to conduct an audit of all active Municipal Parking Garage transponders.After completing the audit in January 2010, Director Sacs identified about 160 active devices that were not associated with a City vehicle and had them disabled. The arrests announced today are a result of the Mayor’s efforts to restore integrity in government and the cooperation between the City’s directors and the Hoboken Police.


Related: The Jersey Journal reported just earlier on an arrest of a city employee at the Municipal Garage.  Expect this story to get legs if well, reporters decide to actually report.


Talking Ed Note: As a matter of policy MSV avoids commenting on press releases from the city.  (It's been our preference to allow the public to digest it first.)  In this instance we're making an exception as this development is truly an outstanding effort to lock down an obvious loophole of systematic abuse.


Now MSV does have a question about the 160 active devices.  Who had them, who failed to report them missing or take any action?  The cost to the city must be in four or five figures and this is a substantial amount of fraud.  An analysis may even hit six figures when it's all done!

Dust up on Church Square Park

Church Square Park is one of the most popular destinations in town and some recent proposed changes by a local Hoboken group, Project Play, introduced their plan detailing efforts for upgrading some of the children's area.

Of the reported 35 residents who attended, there was a clash of ideas on the agenda of what should be upgraded and how.  Three residents aligned against a group of mostly parents and it got heated to the point where the meeting was almost shut down.

Andrew Tavani of Hoboken.patch.com provides the blow by blow, well not quite but it's well told.

Maybe this park needs a new name.  How about Mikie Squared?

Okay, where do I park this rig? 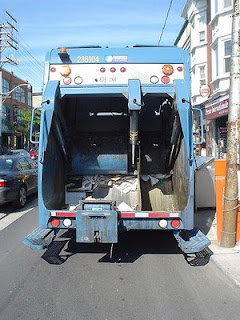 There's a lot of problems with garbage and Hoboken has one big headache on its hands looking to identify at a minimum a temporary solution to relocate the existing municipal garage. Another in a line of inherited failures of the Mayor Roberts administration, the cost to the city is about $100,000 a month to lease the existing property it once owned. An opportunity to rebuild on that space and add a floor or two was also missed when those serving on a local board to evaluate options nixed that idea previously as well.


Next sanitation stop: an outpouring of mostly third ward residents concerned about the Pino towing yard being selected creating a rush of speakers to the City Council podium as an RFP is still out on multiple locations.  Is the Pino space at the top of the list?  Councilman Russo seems to think so and marshaled a mighty effort as he "met with residents" according to Patch.com's report to stave off any potential naming of that location.  Ironically the owner of that tow firm at the current location also testified against Mike Russo's father Anthony who served as mayor of Hoboken before Dave Roberts.  As a partial result of that testimony, Mayor Russo later served jail time for his corrupt activities.  (The last thing Councilman Russo wants is to see that same owner get a nickel or a hefty lease from the city.)


In the scheme of things, pardon the pun, Councilman Russo has a real winner on his hands.  If the city chooses a site among its candidates other than this location on Jackson, the owner of Pino's doesn't get an inflated payday leasing the property to the city and he can pound his chest and declare how he saved the 3rd ward from the fate of sanitation trucks regularly driving by.  If the city does circle back and make the case there is no better location, he surrounds himself with all the real estate people, the new three week residents among others and declares himself the self-anointed Savior of the 3rd Ward. 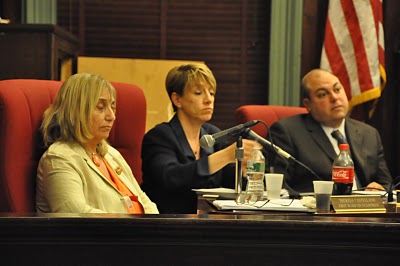 The Council of No: joyous applause at the fracas brought to bear by Mikie Squared

A curious development not available in the earlier Hoboken.Patch.com story but was picked up by Timothy J. Carroll in the Hudson Reporter: what's the truth behind the City Council circus?  It appears the Pino's location is not first on the list of sites after all, but a negotiating lever for the city to apply with other potential sites?  Did Councilman Russo know this?  No matter, since he communicated something, as in confidential city information to third ward residents and created quite the circus.  No doubt he's proud of himself, even if as the Hudson Reporter suggests, the costs could now be substantially higher to the city.


As MSV gazes into the crystal ball, the Zimmer Administration is facing a no win situation.  And the "Council of No" has never been happier since election night in November.


They live for this.

ONE WEEK AFTER DEPARTURE OF FISCAL MONITOR:  TAKES CONTROL OF ITS FINANCES
Having completed its first full week of self-rule free of fiscal monitoring oversight, Mayor Dawn Zimmer highlighted some of the steps taken by her Administration to correct mistakes of the past and position  for a more responsible and fiscally secure future.
"'s days of kicking the can down the road and leaving the check for our kids to pick up are over," said Mayor Dawn Zimmer. "My Administration will always put the City's interests ahead of the short-sighted political expediency that brought us to this point."
After conducting an actuarial review, the City of  last week paid the State of  $4.2 million for an illegal early retirement incentive plan implemented by the Roberts Administration. The City is pursuing alternatives to recouping funds.
"We are quite literally paying for the mistakes of the past," noted Zimmer. "With proper research, we would have known that this was illegal. We didn't create this mess, but we will clean it up and leave  a better place for the next generation."
The relocation of the Municipal Garage, which was sold five years ago, is a major challenge inherited by the Zimmer Administration.
"They sold the garage, spent the money to plug budget holes, and never planned for where to relocate," said Zimmer. "That kind of recklessness threatens 's future and will not be tolerated in my Administration. I’m not simply determined to solve this problem; I’m committed to making sure we don’t find ourselves in this kind of situation in the future. That's why it's been a priority of mine to hire the most qualified individuals who base decisions solely on their professional judgment and on what is best for the City."
On May 12th, Mayor Zimmer traveled to  and appeared before the Local Finance Board to argue for the City's release from state oversight. The board voted unanimously to eliminate fiscal monitoring oversight, four months ahead of schedule.'s first day free of oversight from State Fiscal Monitor Judy Tripodi was Monday, May 17th.
Get the latest  news:
Website | Facebook | Twitter | RSS