Superintendent's Letter to Citizens and Parents Regarding Connors School


THE CONNORS SCHOOL MATTER
Dear Citizens and Parents of Hoboken,

Within the past twenty or so hours, the air has been buzzing about a letter written to me by the Schools Development Authority, a governmental agency located in Trenton, New Jersey, about the status of the renovation of the Connors School. Let me state at the outset that the letter which bears my name and has been making the rounds throughout the area, has yet to be stamped into my office. In other words, I am still waiting to receive a letter which others have chosen to share, and to which reaction is occurring. I did intercept a copy of the letter as it was winding its way among fax machines and e-mail attachments and who knows what else, and then call the Authority in order to receive the “official” document which I did receive via e-mail at 2:50 p.m.

Here are the simple FACTS contained in the letter. “The New Jersey Schools Development Authority….is undertaking a review of the 2008 Capital Plan, in addition to project delivery.
We anticipate an accelerated process ….to complete this review.” The letter then goes on to say”…the fact that the design work for the project has not been finalized, the Connors Elementary School project will not advance to construction this June.” Quite simply, then, as I read the letter, the State is merely saying that the approval of the construction phase will be delayed. In essence, the design stage is continuing even to go so far as state that we plan to meet on this project with State officials tomorrow, Thursday. The letter further suggests that we can continue to utilize the Connors building until further notice. An administrative decision will be made on that issue in early June, once I speak in greater detail with the author of the letter.

I had the pleasure of speaking with the State Official who heads the S D A at this time, and we shall be speaking again next week. Stay tuned for the outcome of further discussion. In brief, then, on May 25th we hear for the first time about a letter from Trenton dated May 21st, which I have still not received via USPS (as of 4:00 p.m. on Tuesday).

Let me assure you, people of Hoboken, that your appointed and elected officials of the community are very concerned, and will be working very hard to obtain clarity with regard to the progress of our Connors School Project. My request is that we not react as a body politic at this time, to allow me the time and space that I need to properly respond to the letter of May 21st which begins, “Dear Mr. Carter.” May I also state unequivocally that this action is NOT aimed at Hoboken in particular, but is part of a review process by the Department of Education and the Schools Development Authority of all 59 new construction and rehabilitation projects.

This letter arrived from Assemblyman Reuben Ramos' office announcing the disappointment in the State placing the construction of the Connors school on hold. There's no clarity on the length of time although the work was anticipated to begin this June. Students from Connors have already been prepared to move to Demarest.

This project earmarked earlier from the State was anticipated to cost $33 million.

The Jersey Journal has posted the story along with a comment from fourth ward Councilman Mike Lenz. Assemblyman Ramos has requested a meeting with the Governor to express the necessity of this project.

Hoboken not our kinda town no more 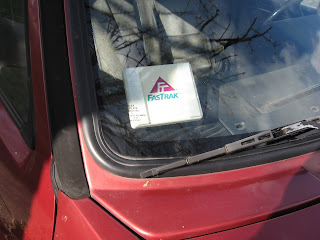 Things had been going pretty well.  Lots of traffic coming and going in and out of Hoboken but I knew I'd always make up for the time lost by not having to hunt for twenty minutes or more to find a parking spot near my destination.  My friend who is buds with Johnny C hooked me up with this nifty little device that gets me in and out of the Hoboken parking garages pronto.  I just leave it in the window and the parking attendant either ignores me or waves me along.

Even when some bad news befell our friend Johnny C, my friend said there's nothing to worry about, everything is good to go.  I pay him a monthly rental fee for the little doo hickey and get unlimited free parking everywhere in town.  Didn't tell my friend I lent it out to my family and friends for a little scratch on the side.  Put them on the friends and family program too.  A little grease never hurt anyone.
So it was pretty bad when my device stopped working last month.  Came into Hoboken and when leaving the garage, the doo hickey thing didn't work and the gate didn't open.  The attendant said there was a problem and I had to pay the cost of parking.  It was $27!  I couldn't believe it.
Took the ticket to City Hall and found out where this Ian Sacs guy was who had replaced our friend.  He was very uncooperative.  He wanted to know who gave me the doo hickey and why I was using it.  I just wanted him to throw out the ticket.  He was really arrogant and told me to get out of his office even when I told him about our friends from the arcade company.  This guy is really thick.  Doesn't he know how things run here?
So then I went to the mayor's office to complain.  Told she was busy although all I saw her doing was talking on the phone and telling someone to shut all of the doo hickeys down.  Maybe she was on the phone with that Ian guy.  Did someone miss a payment or something?
One of our friends told me to go to the Russo Association to see what I can do but they told me to go talk to Councilwoman Terry Castellano.  So I get her on the phone and before I could finish explaining she tells me there is no parking quarters problem.  She said, "It's been resolved" and hung up.

What have they done to our town?  This used to be our thing.  I ain't ever coming back to Hoboken no more.  This ain't our town no more.
Photo: A car transponder, for depiction purposes only.
The above story is satire and a mere guess on what's been discussed about 160 times around town recently.  Your mileage, conversation (and parking) may vary.
Related: A video from back in the day of Mayor Anthony Russo when expectations were more clear on how things should work in "our town."

Rustle up 13 billion dollars or so for New Jersey

The State of New Jersey is facing a double digit deficit in the billions of dollars.  A weekend protest by thirty-thousand mostly public sector workers sought to convince Gov. Christie they should not feel the pinch in meeting that deficit.

This video shows the psychology prevalent today in New Jersey and beyond, some would call it global with France seeking to raise the retirement age from 60 and Greece suffering with riots as the public sector has squeezed its way into every crevice of private sector's production.  At a certain point, it's not sustainable.

This reporter captures the disconnect quite well.  If you haven't noticed, Hoboken will be facing the exact same situation here.  The results will probably be the same except the discussion in Trenton over the weekend may appear quite civil in comparison.

Related: Here's a fine article discussing the potentials for trouble in the global economy due to a lack of political will to control government spending and describes the problem "as moving from private debt to public debt....But rising public debt is never a free lunch, eventually you have to pay for it."
Economist Nouriel Roubini - the man who called the housing boom bust.
Posted by SmartyJones at Tuesday, May 25, 2010
Rustle up 13 billion dollars or so for New Jersey
2010-05-25T09:04:00-04:00
SmartyJones
How does NJ handle its fiscal emergency|NJ billion dollar deficit|
Comments

The Cartel continues to rock

Let's just number these announcements to keep them straight....
1.) The Cartel has been selected to screen at the 2010 National Charter School Conference in Chicago in late June.  Other events will include Keynote Speeches from Bill Gates, Co-Chair Bill & Melinda Gates Foundation and Reed Hastings, Founder & CEO, Netflix.  Full details soon to be released here:
National Charter School Conference

2.) Look for a live TV interview with The Cartel's Director Bob Bowdon on the Fox Business Network's Varney & Co.(with Stuart Varney), this Friday, May 28, 10:30-11amEDT.

3.) New Jersey residents can catch a TV interview with The Cartel's Director Bob Bowdon on News 12 New Jersey's12 in Our Schools , which will air on a rotating schedule throughout the weekend of May 29-30.

5.) The Cartel will screen July 2-8 in Peoria, IL at the Peoria Theater.  Information will soon be available here:
Peoria Theater

6.) Fresh New Screenings in New Jersey, this week & next week:

You can also check here for:
New Jersey Screening Details

Save the date: Career Fair in Hoboken - June 19th